Mumbai: The Congress on Thursday sought Prime Minister Narendra Modi's intervention to reopen the probe into the death of Bharatiya Jana Sangh leader Pandit Deendayal Upadhyay, who was found dead at Mughalsarai Railway Station in Uttar Pradesh in 1968.

"Deendayal Upadhyay murder case has been a mystery for the last 49 years. At least in his birth centenary year, Maharashtra Chief Minister Devendra Fadnavis should request Prime Minister Narendra Modi to reopen the probe into his murder," MPCC (Maharashtra Pradesh Congress Committee) spokesperson Sachin Sawant said in a statement.

He said the Centre and various state governments were celebrating the birth centenary of Upadhyay who was the president of Bharatiya Jana Sangh (BJS), forerunner to the present day BJP.

"The government is renaming railway stations in his name, erecting his statues in various places, naming various schemes in his memory, among other initiatives. It is thus unfortunate that the death of such a towering personality remains a mystery," Sawant said. 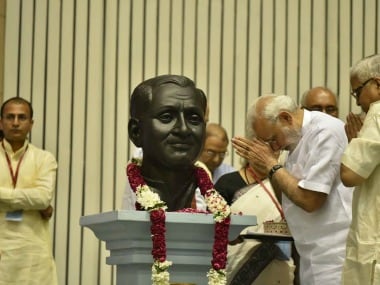 Notably, Fadnavis on Thursday moved a congratulatory proposal in both Houses of the state legislature, hailing the work done by Upadhyay.

"Since it came to power three years back, the BJP has discussed and shown an inclination to probe the death of revolutionary leader Netaji Subhas Chandra Bose. It was expected that the government also probe the death of Upadhyay, who holds immense importance for the saffron party.

"Unfortunately, neither the government headed by Atal Bihari Vajpayee, nor the present day dispensation headed by Modi initiated any steps in this regard," Sawant said.

He said former BJS president Balraj Madhok reportedly had some crucial information about the Upadhyay case, but nothing was done, "though his (Upadhyay's) descendants and BJP leader Madhu Sharma had demanded a fresh probe".

"There is no harm in making another attempt. Fadnavis should request the prime minister on behalf of the state to start a fresh probe," Sawant added.