New Delhi: Congress on Sunday slammed Jammu and Kashmir Chief Minister Mufti Mohammed Sayeed for his statement that Pakistan and militant groups had made the atmosphere conducive for elections in the state and said BJP should explain the position of its ally. 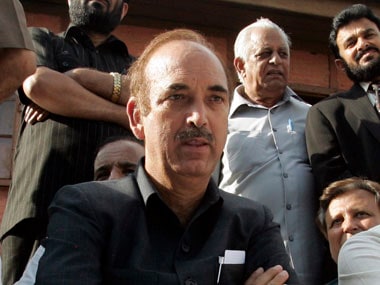 "This is totally untrue that Pakistan or militant groups made the atmosphere conducive. How can the new government forget killing of nearly 6 to 8 sarpanches and suicide attack at an army camp in Uri in which army officers lost their lives.

"In fact, Pakistan and militant groups tried their best to destabilise the democratic process in the state," Leader of Opposition in Rajya Sabha and senior Congress leader, Ghulam Nabi Azad, told PTI.

He said it was the people of J-K who had strengthened the roots of democracy in the state and the newly cobbled together alliance should refrain from extending credit in the wrong direction.

"First, the credit goes to the people of J-K; second to our forces who maintained a tight vigil on the border day and night; third to Election Commission and, above all, to Indian democracy," he said.

Asked how he would describe Sayeed's statement, Azad said, "I don't have to explain anything. It is for the BJP to explain this."

Earlier, during a press conference, Sayeed had said, "I want to say this on record and I have told this to Prime Minister (Narendra Modi) that we must credit the Hurriyat and the militant outfits for conduct of Assembly elections in the state."

He also said, "People from across the border allowed conducive atmosphere during the elections. My humble submission is that peaceful elections were not possible if they had done something.

"You know how small action was needed to disturb the elections. They allowed the democratic process to go ahead. This gives us hope."