New Delhi: The Congress on Saturday accused the police of carrying out a "one-sided" investigation into the violence in Delhi and urged the Supreme Court to appoint an amicus curiae to scrutinise all such cases in which protesters and activists are being slapped with serious charges.

The party's senior spokesperson Anand Sharma also said the situation is far from normal and an atmosphere of fear is still prevailing in the National Capital. 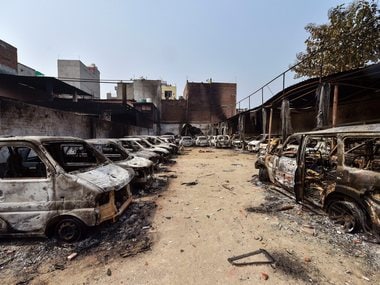 Sharma alleged the police "which allowed Delhi to burn for four days" is carrying out a "one-sided" investigation. He said in the name of action it should be seen against whom the action is being taken.

"What is the definition of hate speech? If the speeches made by the BJP leaders were not hate speeches, and the protests are a threat to the society as per the cases registered. Shockingly, as per an FIR against a group of people and an organisation called United Against Hate. And what is the case...for having said in a speech that 'we shall not get up or give up our protest even if we have to die for that'. For that they were slapped with section 307 of IPC (attempt to murder)," he said.

"We urge the Supreme Court to take cognisance of all these cases and appoint an amicus curiae to scrutinise all these cases where people are being framed and put in jails," Sharma told reporters.

An amicus curiae assists a court by offering information, expertise, or insight that has a bearing on the case.

"The SC is the custodian of the Constitution. The delays don't help. The entire world is watching this country, it is time that the Supreme Court intervenes effectively to protect the rights of the citizens guaranteed by the Constitution," Sharma said.

"We have no expectations from Centre or the Home Ministry or Delhi chief minister (Arvind Kejriwal) but we have hopes from the courts," he said.

At least 42 were killed and over 200 injured in the communal riots that broke out in northeast Delhi on Monday after clashes between citizenship law supporters and protesters spiralled out of control.

The areas worst affected in the violence include Jaffrabad, Maujpur, Chand Bagh, Khureji Khas and Bhajanpura.