In 1974, students of an engineering college in Ahmedabad protested a fee hike. They came out on the streets, and they started receiving widespread support in the backdrop of runaway inflation and an allegedly corrupt state government of Chimanbhai Patel. In no time, the protests snowballed into a state-wide agitation, called Navnirman Andolan. Wikipedia claims this to be the only protest of its kind to have led to the fall of a government. Jayaprakash Narayan, who visited Gujarat then, took inspiration from it for his Total Revolution movement, and soon it was time for the Emergency.

If, as JP saw it, what happened in Gujarat was the precursor to what was going to happen elsewhere in India, then the country’s focus today should be on the Patel – or Patidar – community’s big rally in Ahmedabad on Tuesday to press for OBC status. 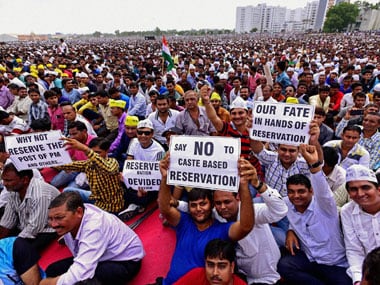 The Patel community rally in Ahmedabad on Tuesday. PTI image

If you go hunting for a house in any upscale residential area of Ahmedabad or any other city in Gujarat, the broker will tell you with an element of pride that only “Patels, Baniya and Brahmins” are allowed in the housing colony. Patels, in other words, are right at the top of the social hierarchy. But they have had enough of the forward-caste status. Now they want to be backward, and they have been holding peaceful rallies, attended by lakhs, since July to push for it.

It is an irony of our times that the politically, socially and economically dominant community of a state is demanding backward status. It also brings full circle what happened in 1985 – one of the three events that changed politics in Gujarat (the other two being 1974 and 2002).

In the early 1980s, the Congress government, led by inimitable Madhavsinh Solanki, decided to implement quota for the socially and economically backward castes (SEBCs), equivalent to what was to be called other backward classes (OBCs) later, under the Mandal Commission. The upper castes in Gujarat, especially Patels, were not happy with it. The quota decision, and the Patel opposition to it, was in a way an expression of the larger equation: Solanki had come to power with his famous KHAM (Kshatriya, Harijan, Adivasi and Muslims) formula. Patels, the traditional land-owning, rich-farmer community (constituting 15 percent of Gujarat’s population, going by the last caste census of 1931), was peeved at being sidelined.

Pride is the first characteristic of a Patel in Gujarati literature. At the village level, their word usually is final. The village head is called Patel, regardless of his community. The two chief ministers immediately before Solanki were Patels.

Upper castes, led by Patels, began protesting and this snowballed into a statewide violent agitation in March 1985, somewhat like what we have seen in the past month. This led to caste riots in Ahmedabad and other cities, with record-breaking long curfews in parts of the walled city. With the Congress on one side and a nascent BJP on the other, it turned into a communal riot, which went on for months. This finally led to Solanki’s fall, and the rise of BJP – first in the Ahmedabad municipal corporation and later in the state assembly.

Thirty years later, the state government's position is the same. The BJP, banking on the non-KHAM sections – that is, the upper castes, came to power; and its first chief minister, no wonder, was a Patel – Keshubhai. When he lost popularity and had to go in 2001, his replacement was an OBC leader who could deliver what Patels and other upper castes wanted back then: market-oriented, growth-centric administration. They have been largely happy, notwithstanding some small-scale protests,  which Narendra Modi quelled effectively. On his departure, the next chief minister was a Patel, and the community should be content. It is not.

Today, in seeking reservation in education and government jobs, the young Patels do not realise this, but they are effectively rejecting all the arguments against the affirmative action their fathers and uncles made 30 years ago. Back then, we used to be asked if one would ever go to a doctor who got admission to a medical college under a quota. Merit was the clinching argument. Today, the socially dominant community of an economically advanced state does not see any merit in the argument, and is joining the queue for quotas.

If what is happening in Gujarat can be taken as indication of what the nation will see tomorrow, then instead of a rethink on quota, we have a consolidation of quota coming up. Because, a large section of the middle class, it seems, wants the state to take care of their education and jobs.

As for the immediate political fallout of the Patel protests, it remains to be seen how Anandiben Patel responds to the situation – especially when the OBCs too are uniting to hold their own counter rallies. Two of her predecessors, Chimanbhai and Solanki, failed despite their famed political acumen.

The simple course of action would be to form a committee to study the demand, which should take the wind out of the agitation. No matter what the committee recommends, the backwardness is defined by a set of criteria, and it is not an executive’s prerogative. A Supreme Court bench in March this year did strike down the UPA government’s decision to grant OBC status to the Jats.