As many as 331 persons, including 241 civilians and 92 policemen, have been killed by the Naxals in the past six months. The piece of news hardly packs the punch to make it to the headlines – 331 at one go would have been much better for our media.

The bleeding heart brigade won’t make much of it too — not many Naxals were killed, at least the government’s report does not say so. And ordinary folks and the cops, agents of the state, of course, deserve what they get. 331 persons, including 241 civilians and 92 policemen, have been killed by the Naxals in the past six months. AFP

This section of civil society exulted when the Supreme Court scrapped Salwa Judum, the Chhattisgarh government’s initiative against the Naxals. The red rebels have turned a threat to the internal security of the country – the acts of wanton destruction of public property and killing of innocent people are a pointer. It is not possible that civil society members are not aware of this. But they are intriguingly silent when it comes to offering solutions. They refuse to see the distinction between Naxals and the tribals. Putting both in one bracket serves their interest; it puts them on a higher moral ground vis-à-vis the government.

The government has a responsibility, they have none.

Activist Medha Patkar wants the Land Acquisition Bill put up by the government in the public domain scrapped. The government’s new bill stipulates that consent of 80 percent of project affected people is mandatory in case of land to be acquired for private purposes. Patkar demands that the same clause be made applicable to the government too.

It practically means, if the government wants land for public projects like nuclear power plants, dams, thermal power plants and airports it would not have much of a choice. It has to go through unending rounds of public protests, a flood of litigations, politically motivated campaigns to see its projects through. It has to resign itself to delays, cost overruns and defaults on commitments to investors too. 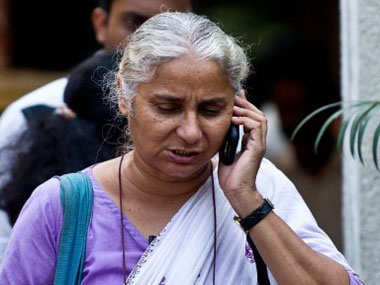 One has not heard Medha Patkar speaking about ways to balance national interest with people’s interest. AFP

Patkar speaks for the people. That’s the easiest thing to do in the world. One has not heard her speaking about ways to balance national interest with people’s interest.

The government has a responsibility. She has none.

Another section of activists wants the government’s Food Security Bill trashed. Well, it deserves to be dumped — it will bleed the country’s exchequer dry, cause severe imbalances in the already stressed agriculture sector, and there are existing schemes to care of it basic purpose. But this bunch takes it argument to the opposite extreme. It wants universalisation of food grain entitlements and wants inclusion of pulses, millets and oil besides cereals and cooked meals in the bill. Imagine the cost to the economy.

The Sonia Gandhi-led National Advisory Council and a section of the civil society are in competition to be populist. Neither needs to be responsible; that’s the government’s worry.

And, that’s asking too much from a government that’s in paralysis.

Gandhian Anna Hazare and his team want to eliminate corruption in the country in one single sweeping action. It has been one long, bitter and determined fight from this section of the civil society but a fight with an apparent lack of clarity on the plan of action.

In his latest appeal, Hazare has asked the parliamentarians not to allow the government’s version of the Lokpal Bill to be introduced in the House because it’s 'anti-poor'.

It is unclear why he does not impress upon the leaders to pressurise the government to discuss his version of the bill in the House. It’s always a long way between the introduction of a bill and its final clearance. A lot of changes can happen while the bill is under process. His team is busy conducting referenda instead to keep overstating the obvious.

The civil society is on the rampage across India. It always had an opinion on all issues across the spectrum. Now it has gone hyper expressive. Nothing wrong with that though.

It’s easy to side with the masses and take on the government of the day, be in the BJP’s in Chhattisgarh or the UPA’s at the Centre. But do they offer solutions? Do they try to be part of the solution?The answer, unfortunately, is no.

Well, the government has a responsibility and they have none.