New Delhi: Civil Aviation Minister Ashok Gajapathi Raju today came out in defence of his besieged aide Appa Rao for his alleged contacts with arms dealer Sanjay Bhandari, saying that he has "confidence" in him and that the charges can be verified.

Rao is at the centre of a controversy involving Bhandari, who is being probed for allegedly buying a benami house for Robert Vadra in London.

"If anyone has clandestine deal with me, I want to know how they had it. It is my job to see that there is nothing clandestine going on, it is simply that. As long as I have confidence in him (Rao), he is there because he is my appointee," Raju told news channels. 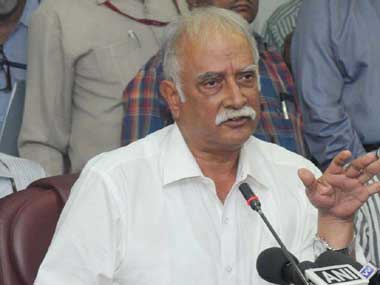 "What is the allegation against him? That he has spoken so many times. That(allegation) is verifiable. And it will be verified...My personal staff, I am responsible for them, I choose them. If my personal staff has done something, it is my personal responsibility. I am supposed to be there, they are accountable to me. I am very clear on that," Raju said.

"If you have an allegation, please give it. If you say a person has talked over phone, that is verifiable... We are for zero corruption. If you have a corruption charge, please tell us. I am not going to encourage corruption much less in my personal staff".

"You don't hang a fellow before you talk to him. Let us also be reasonable,"he said.

According to investigation agencies, Bhandari was constantly in touch with Rao, who is Raju's Officer on Special Duty (OSD), and allegedly made some 355 calls to him, a charge denied by Rao who insisted that the relationship was only "professional".

"We got an acquaintance for the first time at the Bangalore Air show. He (Bhandari) had invited the minister to see his stall. Minister went and saw it. I don't have any personal relationship," Rao said.

Meanwhile, Raju today called off a scheduled press conference to announce consumer-centric initiatives taken by his ministry which said more internal discussions were needed on them.