Last week, the Myanmar government announced the suspension of a dam project to be built with Chinese assistance, on the Irrawaddy River in the northern part of the country.

The decision, taken in response to public outcry over the controversial project in Kachin state, marked the first time that a government has revisited plans to undertake a project with China without worrying about its repercussions.

This is also the first time that the government of President Thein Sein, which came to office in March last year, has responded to public pressure and representation from democracy activist, Aung San Suu Kyi, against a Chinese-aided project. 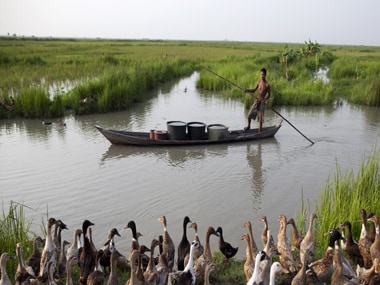 A China-Myanmar dam project on the Irrawaddy River in Kachin state has been suspended. Getty Images

For some months, there has been similar pressure from the people of the Arakan area, against awarding contracts for exploration to Chinese oil and gas companies and for the construction of pipelines and a railway line from Arkan to China's Yunnan province.

Those opposing the project say the 3,600 MW project would have submerged dozens of villages, displaced more than 10,000 people, destroyed the area’s ecology and benefited the people of Yunnan.

Earlier this year, the Kachin Independence Organisation (KIO)  --  an armed opposition which runs the Kachin state and has its own bureaucracy in northeastern Myanmar -- terminated a 17-year ceasefire agreement with the Myanmar government in protest, warning that it would forcibly block the project undertaken by the China Power Investment Corp.

Suu Kyi has been quoted as saying: “It’s good to listen to the people’s voice. That’s what all governments should do.”

In a recent statement, she had warned that the fault lines in the vicinity of the dams and the immense reservoir raised the spectre of “horrendous devastation in the event of an earthquake.”

According to her, another “serious problem” would be a weakened flow of the lrrawaddy which would result in the intrusion of salt water into the delta.

Aung Wah of the Kachin Social Network said the government needed to do more to protect the Irrawaddy from ecological devastation. “There are six other mega dams under construction or planned on the N’mai and Mali rivers which will export electricity to China and will have the same effect as the Myitsone dam,” he said, referring to the two rivers that form the headwaters of the Irrawaddy.

The Burma Rivers Network, formed by groups representing the local communities, has called on the government to immediately cancel the  six other dams planned on the Irrawaddy source rivers, which, it said, “will have the same devastating impact on the country.”

It has urged the people of Myanmar to “demand an official declaration and pull-out of all personnel and equipment from the dam site by the project-holder, China Power Investment.”

The previous military government had kept secret an environment impact assessment report, which had warned against the Chinese projects.The report was recently leaked to the public by whistle-blowers in the government. It warned: “The fragmentation of the Irrawaddy River by a series of dams will have serious social and environmental problems not only upstream of dams but also far downstream in the coastal area. There is no need for a huge dam such as the Myitsone to be constructed on the waterway.”

The Chinese Government surprised by Myanmar's decision, has made no secret of its unhappiness.

Chinese Foreign Ministry spokesman Hong Lei said  in Beijing: “The Myitsone hydropower plant is a China-Myanmar jointly invested project, which has gone through scientific feasibility studies and strict examinations by both sides. Relevant matters that have emerged during the implementation of the project should be properly settled through friendly consultations between the two sides. The Chinese Government always supports its enterprises to cooperate with foreign companies on the basis of mutual respect, equality and mutual benefits, and orders Chinese enterprises to strictly perform their duties and commitments according to laws and regulations of the countries where they work.”

The Myitsone hydropower project is a joint project between China Power Investment Corp, Myanmar’s Ministry of Electric Power-1 and the Asia World Company. The construction, which started in December 2009, was to be completed in 2019.

The decision of the present Myanmar government, which consists largely of retired military officers, has political significance. It shows that the government does not consider itself bound to implement the controversial decisions of the previous military dictatorship. It remains to be seen whether Beijing will use its influence in the Myanmar Army to have the decision reversed.