Srinagar: Relations between the incumbent and the longest serving Governor of Jammu and Kashmir, NN Vohra and the Centre began to sour after the former sent a letter to the Union home ministry to postpone the date for hearing petitions challenging the Article 35-A in the Supreme Court until such time as a popular government assumes charges. According to sources, the Centre didn't like the idea and has begun to look for Vohra's replacement.

The State Subject Law has become a new bone of contention between the state and the Centre in the wake of the hearing on the petitions challenging the Article 35-A of the Indian Constitution before the Supreme Court on 6 August. Kashmir is rife with rumours that the apex court will strike down the law. Sources in Raj Bhavan said the letter suggested to the Union home ministry that it will be "fitting" if the apex court schedules the hearing on Article 35-A only when an elected government is in office "after fresh elections" and that any adverse ruling would plunge the state into "chaos". 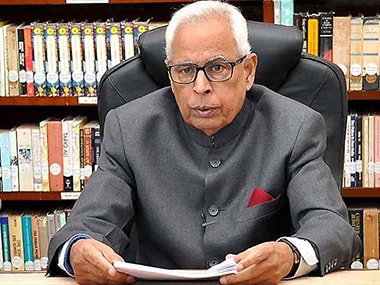 The governor's office refused to comment on the issue saying it has no information about any letter; repeated calls made to the PRO of the governor went unanswered.

"When you are governor of a state you represent interests of that state and not those of the Centre's. Even having an opinion on this constitutional provision might not have gone done well with many people in Delhi, that could be the reason, if at all it is true, for this sudden change of heart in the National Capital," senior advocate and constitutional lawyer advocate, Zaffar Shah, said, "He (Vohra) was supposed to be in the role (governor) for some time."

According to sources, after Vohra's letter, New Delhi, which was earlier in favour of granting him a six-month extension until the panchayat elections, has actively began looking for his replacement.

Vohra first took over as Jammu and Kashmir governor on 26 June, 2008, when the state was in utter turmoil over the transfer of land to the Shri Amarnath Shrine Board. He not only handled the extremely challenging tests his administration faced in both the Valley and the Jammu region until September 2008, but also conducted state Assembly elections at the end of the year.

Article 35-A, which defines permanent residents of the state and prevents non-locals from buying or owning property in the state, has been challenged by an NGO called 'We the Citizens', and other groups in the Supreme Court. There are apprehensions that its removal through judicial process could lead to a demographic change in the state. The Article, which was added to the Indian Constitution by a Presidential Order in 1954, accords special rights and privileges to the citizens of Jammu and Kashmir. Apart from imposing a complete ban on the acquisition of immovable property by non-permanent residents of the state, it declares that a non-resident is disqualified for registration in the electoral rolls as a voter and from holding any government job in the state. They can, however, vote in the General Election.

Analysts here feel the removal of the Article 35-A could plunge the state — which has experienced a running insurgency for the past 30 years — into perpetual conflict. They also argue that it would give rise to Kashmiri nationalism as people across the state are in consensus that the Article's removal reopens the 1947 Accession debate again. Civil society members, mainstream politicians and Hurriyat leaders alike have come together in a single voice that any tinkering with the law could lead to mayhem in the state. The elected lawmakers and political parties have already conveyed their angst over the issue to the Centre as the state prepares for a two-day shutdown on 5 and 6 August.

"The reason why they want to replace Vohra is because he is not their 'yes-man'. He calls a spade a spade. The BJP tried earlier also to push policy decisions that were against the interests of Jammu and Kashmir, but Vohra stood his ground and didn't budge. At this stage of life, he would not like to be seen as a 'traitor' when he has won hearts in Jammu and Kashmir," said Nasir Aslam Wani, the National Conference leader.

After serving Jammu and Kashmir for over a decade that witnessed mostly downs and fewer ups, Vohra, who will be known as an astute administrator, is likely to bid final farewell to his active role immediately after the end of the Amarnath Yatra. Sources said a former Union home secretary is among the contenders for the difficult post. "I think it is likely to happen soon now," Wani added.

The Union home ministry had earlier suggested that due to the political uncertainty after the fall of the PDP-BJP coalition government, changing the governor would not be feasible due to the ongoing Amaranth Yatra and upcoming panchayat elections.