Prime Minister Narendra Modi elevated four senior Bharatiya Janata Party (BJP) ministers to the cabinet rank as he roped in nine new members to the Union Council of Ministers as part of a Cabinet reshuffle on Sunday morning.

Here are the major challenges that lie ahead of the ministers who were newly promoted to Cabinet rank and other whose ministries were shuffled:

As Piyush Goyal takes over the reins of Ministry of Railways  from Suresh Prabhu, some of the biggest challenges that Goyal will be expected to resolve include concerns over safety, efficiency and finances.

According to Indiaspend, the number of deaths recorded in train derailments in the year 2016-17 were the highest in a decade, something that is perhaps led to Prabhu's ouster. Apart from bringing the number of train accidents down, Goyal also has to monitor the Ministry of Coal at a time that the industry is facing severe fuel shortage.

As India's first full-time Defence Minister, Nirmala Sitharaman has her work cut out, especially at a time when India's borders remain unstable due to the twin challenge of cross-border terrorism sponsored by Pakistan and China's unpredictable behavior.

Her appointment is also likely to keep the focus on the substantial changes that have been initiated in the past few months by Arun Jaitley. The changes include a firm push for a private sector-led military-industrial ecosystem, pruning wasteful expenditure and bringing in accountability for public sector defence units.

Dharmendra Pradhan’s promotion as a cabinet minister comes right after the successful implementation of the national scheme to provide free LPG cylinders to BPL families — a pet scheme of Modi. As he still retains the petroleum ministry, Pradhan at the helm of the Ministry of Skill Development will be entrusted to give a new push to the Skill India Mission, another issue close to the prime minister's heart.

His elevation is also expected to pave the road for BJP into Odisha — Pradhan's home state.

Mukhtar Abbas Naqvi, the lone Muslim face in Modi's Cabinet, is the only minister to take oath on Sunday whose ministry was not shuffled. As he continues to work for the upliftment of minority communities, Naqvi said, "Our aim is to make a 'New India' which is inclusive of the poor, the down-trodden and other weaker sections of the society. I will try to fulfil the responsibilty that the prime minister has entrusted me with."

As Nitin Gadkari replaces Uma Bharti as the Minister of Water Resources, River Development and Ganga Rejuvenation, his primary task will be to deliver on Bharti's promises. While critics say significant progress was achieved in irrigation under Bharti, work towards cleaning the Ganga and water reforms fell far below expectations.

Among Gadkari’s immediate tasks will be taking forward a move to enact a law for cleaning the Ganga, on which there has been sluggish efforts after a committee headed by Justice (retired) Giridhar Malviya submitted its report last May, reports say.

After being shunted out of the Minister of Water Resources, River Development and Ganga Rejuvenation for little progress on the Ganga cleaning project, Uma Bharti will now head the Ministry of Drinking Water and Sanitation, a key part of the prime minister's Swachh Bharat Mission (Rural).

Although Bharti's job will be mainly restricted to funding and overseeing implementation by the states, her ministry's role will be vital in making the country 100 percent open defecation-free by 2019, and eliminate manual scavenging. 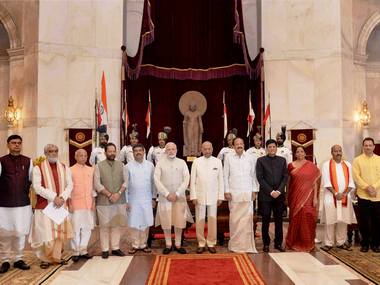 Here are a few of the new faces who took oath as Ministers of State on Sunday:

With the latest mid-year Economic Survey noting that India has a lot of potential for tourism that is yet to be explored, Alphons Kannanthamam, a former diplomat, has his job cut out. As per industry estimates, the size of the Indian tourism and hospitality sector was $117.7 billion in 2014 and is expected to rise to $418.9 billion by 2022, according to The Indian Express.

"India has immense potential. We are a 5,000-year-old civilisation. We are much more than incredible. Our heritage is our USP and we have to devise ways to market it," the report quoted Kannanthamam as saying.

Ministries of Urban Development and Housing, and Urban Poverty Alleviation were merged to form the Ministry of Housing and Urban Affairs recently. Hardeep Singh Puri, a retired IFS diplomat, now takes over the department which was headed by Venkaiah Naidu before he became vice-president. So with two ministries now effectively under Puri, he will have to work with them independently until the merger is complete.

Puri's first public event will be inaugurating a Metro project in Lucknow, The Indian Express reported. The report added that the ministry is currently in charge of multiple urban and housing policies such as the Smart City Mission, AMRUT, Swachh Bharat Mission (Urban), the Metro policy, and the Pradhan Mantri Awas Yojana.

Taking over the reins of the Ministry of Youth Affairs and Sports from Vijay Goel, former Olympic champion Rajyavardhan Singh Rathore will have to re-structure a ministry that has seen several changes in the past few months. Rathore will be in charge to streamline India’s preparation for the Tokyo Olympics, as a roadmap recommended by an Olympic Task Force for the next three Olympics is yet to be implemented.

Rathore is also expected to convince the Union Cabinet that the National Sports Bill that has been struggling to get to the Parliament for four years now, will have to see the light of the day sooner than later.

Shiv Pratap Shukla, who had been Minister for Prisons in the Kalyan Singh-led BJP government in Uttar Pradesh, will work under Arun Jaitley as Minister of State in the finance ministry, a department which has undertaken major steps in the recent past including demonetisation. But Shukla's elevation by the party’s state cadre as a bid to balance power equations in the Gorakhpur region of eastern Uttar Pradesh.

Shukla is a prominent Brahmin face of the party in eastern Uttar Pradesh and some party leaders are seeing his induction also as a compensation after the exit of Kalraj Mishra, another Brahmin MP from Deoria, as Union minister, The Indian Express reported.