Former prime minister Nehru was once quoted as saying, “You don't change the course of history by turning the faces of portraits to the wall.” 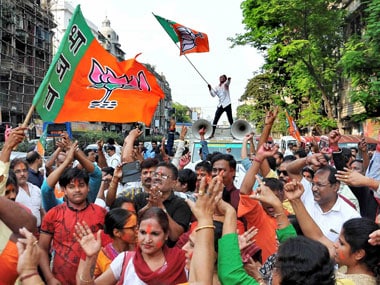 Nor do you achieve anything by tearing down statues. As Indians, two visuals stay frozen in the mind. One is of the statue of the Iraqi leader Saddam Hussein being toppled to the ground in a haze cloud of dust and debris. The other is of the Taliban destroying the Bamiyan collection of priceless Buddhist figures in eastern Afghanistan. Both filled us with a certain sadness.

The Hussein attack we could perhaps understand as an act of relief as a despot was deposed. Even then, there was something ghoulish about the way it was done and it could have been simply taken away rather than be projected as a dance on the grave. The Bamiyan atrocity was sickening and we all felt a strong dismay and horror at such an act of wantonness.

Then we see it replicated in our country. The toppling of two Lenin statues by alleged BJP supporters so soon after the saffron party's election victory in Tripura should fill us with disgust. Such arrogance in triumph is distasteful.

Not that a Lenin statue is in itself integral to our history or particularly relevant, but it is the act of deliberate destruction of a symbol of the politically vanquished, an act which frighteningly underscores the new intolerance that marks our nation these days. And the unfortunate part is that the BJP far too frequently has a lead role in these shenanigans.

If Tripura by itself was not foolish enough, we have BJP stalwart H Raja in Tamil Nadu predicting the fall of the statue of Periyar (E Ramasamy), the rationalist who founded the Dravidar Kazhagam in 1967 and is still a major force to reckon with. Again, it is the BJP trying in vain to dislodge Dravidian rule by bordering on the absurd. We don’t stop here. The statue of Jan Sangh leader Syama Prasad Mookherjee was vandalised by a leftist group and guess who complained? The BJP wanted stringent action against the hooligans. Well, thank you very much. What's sauce for the goose…

Statues have held such a fascination for us that it would be tragic if it wasn’t so comical. India’s leaders still believe that the ‘tamasha’ element in announcing these sycophantic projects pleases the public. Whether it is celestial gods or those political deities, there was a time that premise was valid and we blindly adored these edifices and converted them into rallying points.

But times have changed. That con game now only arouses ire and disdain. Mamata Banerjee put up elephants all over Kolkata street corners. Remember Mayawati’s giant statues to herself in the multi-million dollar park, showing her and her handbag? Even while there was concern over the $500 millio 630 foot statue of Shivaji, Prime Minister Narendra Modi promoted Vallabhbhai Patel's ‘Statue of Unity’ in Gujarat.

Which prompted Canadian politician of Indian origin Ujjal Dosanjh to write in the Indian Express about the BJP’s inclination to engage in the populist politics of statues: “Dear Prime Minister: You are once again thrusting India into the dangerous politics of statues; the politics of pandering to regional and other identities; the politics of turning real heroes into the lifeless steel and stone kind — for any pigeons to freely relieve themselves on; the heinous politics of clever, but criminal distraction from the life and death issues of poverty, corruption, injustice and inequality in India.” And then he asked: “Doesn’t India have time for her huddled masses?”

Put that on a pedestal.