BJP to ask alliance partners GFP, MGP to merge with it as demand for new CM grows amid falling health of Manohar Parrikar

Panaji: The BJP leaders from Delhi who are visiting Goa on Sunday to assess the political situation in the coastal state against the backdrop of the failing health of Chief Minister Manohar Parrikar, will ask the alliance partners of the saffron party to consider a merger with it, a senior leader said here on Saturday.

Bharatiya Janata Party (BJP) leader Michael Lobo, who is the deputy speaker of the Goa Assembly, told PTI that the party emissaries would suggest to allies Goa Forward Party (GFP) and Maharashtrawadi Gomantak Party (MGP) that they should become part of the saffron party. 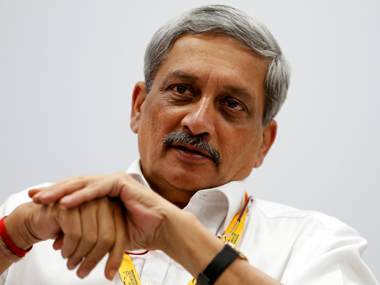 "Right now, our main focus is on increasing the strength of the BJP from 14 to 17 on the floor of the House," Lobo said.

"A proposal will be made to the GFP and MGP, asking them to merge with the BJP. Only after that, we will take up issues such as who will be the next chief minister or who will take over the charge or anything related to it," Lobo said.

Parrikar (62) was admitted to the All India Institute of Medical Sciences (AIIMS) in New Delhi on Saturday morning. He had undergone a three-month-long treatment in the United States for a pancreatic ailment earlier this year.

The GFP and MGP have three MLAs each and are supporting the BJP-led government in Goa.

GFP president Vijai Sardesai was not available for comments, but MGP chief Deepak Dhavalikar ruled out a merger with the BJP.

"There is no question of a merger. We are not interested in a merger. It will never happen. We have built the party over several years and it is the hope for the future of Goa's politics," he said.

"We have a 12-13 percent vote share in the state, so where is the question of merging?" Dhavalikar asked.

Earlier on Saturday, the MGP had said it was "high time" Parrikar handed over the charge to the senior most minister in his cabinet during his absence.