New Delhi: The Congress on Monday demanded a sedition case against BJP MP Anantkumar Hegde for his swipe at Mahatma Gandhi, while a red-faced BJP initiated disciplinary proceedings by serving him a show cause notice seeking an explanation. 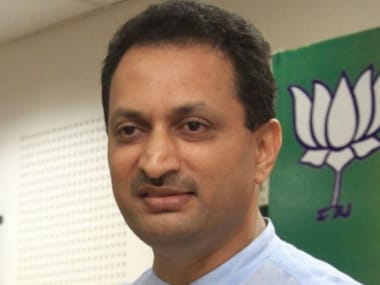 A senior BJP leader said its top brass, including Prime Minister Narendra Modi, is "upset" with the sixth-term Lok Sabha MP, who was a minister in the first Modi government, and the Karnataka leader has been asked to take remedial measures, including tendering an apology.

The party will take its next course of action after receiving his reply, he added.

Hegde had questioned the freedom movement led by Gandhi, saying it was an "adjustment" with the British, remarks which triggered a huge political row. Freedom fighters who did not sacrifice anything made the country believe that it attained independence through 'Upavas Satyagrah', Gandhi's preferred mode of agitation, and became 'mahapurush' (great person), Hegde had said at an event in Bengaluru on Saturday.

Hitting out at the BJP, the Congress demanded an apology from Prime Minister Narendra Modi.

At a party briefing, Congress senior spokesperson Anand Sharma said it was time for Modi to show whether his loyalty was with Gandhi or with his assassin Nathuram Godse. "They are disparaging the national movement. If the prime minister and the BJP government are sincere about the 150th birth anniversary celebrations of Mahatma Gandhi, we demand that the prime minister come to Parliament and clarify his position," Sharma said.

"They are desperate for elections and only to get some votes, they are inflicting deep wounds on the soul of India," he said.

Demanding Hegde's expulsion from the BJP, Congress spokesperson Jaiveer Shergill said Modi should apologise for Hegde's remarks and a sedition case should be lodged against the former Union minister.

Karnataka BJP president Nalin Kumar Kateel told PTI that the party's central leadership has served a show cause notice to Hegde as part of its disciplinary measure against him.

A Union minister from the BJP said that the top party brass, including Modi, is "unhappy and upset" with Hegde for his swipe at Gandhi, whose birth and death anniversaries have often been occasions for the saffron party under Modi to launch public campaigns over a variety of issues.

With the BJP parliamentary party meeting slated for Tuesday, there is speculation in the party that Modi may touch on the issue in his address as he has often in the past expressed his displeasure over show of indiscipline by its members.

Incidentally, this is not the first time a show cause notice has been issued to Hegde. He and Pragya Thakur were served show cause notices by the BJP leadership for their praise of Godse during the 2019 Lok Sabha poll campaign.

While the then BJP national president Amit Shah had condemned their remarks and announced action against them, the party never made any official comment about the outcome of the disciplinary proceedings.

However, the party had barred Thakur from attending its weekly parliamentary meeting during Parliament's last session after she praised Godse yet again. Both Hegde and Thakur were elected to Lok Sabha.

Hegde is a sixth-term Lok Sabha MP and is known for his hardline Hindutva views and controversial comments. A minister in the first Modi government, he was forced to apologise after saying that the BJP dispensation was here to change the Constitution.