Allahabad: Lashing out at Mayawati for her criticism of Prime Minister Narendra Modi's statement on triple talaq, the BJP on Tuesday charged the BSP supremo with pursuing vote bank politics "at the cost of dignity and constitutional rights of Muslim women". 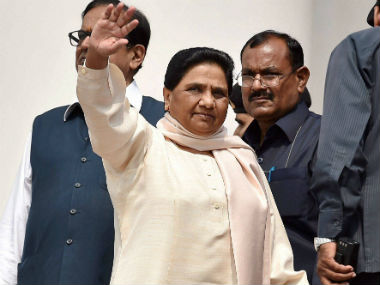 In a multi-pronged attack, it also accused the Samajwadi Party government in Uttar Pradesh of "non cooperation" with the CBI in the NRHM scam involving Mayawati and alleged that the ongoing family feud in the party was "a farce enacted with the aim of creating a sympathy wave in support of Chief Minister Akhilesh Yadav".

"The BJP believes that the practice of triple talaq is grossly unfair to women. No wonder it is not prevalent in many Islamic countries. This is the view that was put forward so eloquently by the Prime Minister at his rally on Monday. Mayawati has only vote bank politics on her mind," BJP national secretary and spokesman Siddharth Nath Singh told reporters.

"With the Samajwadi Party imploding, it is Mayawati's guess that Muslims of UP, who have traditionally been with Mulayam Singh Yadav, will gravitate towards her party in the upcoming assembly elections. Her vituperative remarks against PM Modi stem from this very hope," he claimed.

He said "As a former Chief Minister, Mayawati should know that a person holding a constitutional post has to work in accordance with the Constitution, which ensures right to equality to every citizen irrespective of gender or religion.

"But Mayawati is interested in pursuing her vote bank politics even at the cost of dignity and constitutional rights of Muslim women, while eyeing the votes of the entire community."

Training his guns at the ruling SP in the state, the senior BJP leader alleged "they (leaders of the party) may be sworn enemies of Mayawati, but it is their non-cooperation with the CBI that has prevented the BSP supremo from being sent to jail.

Chief Minister Akhilesh Yadav may be on a collision course with his uncle but seems to have a lot of love for her 'bua' (aunt – a term the CM has used often for his predecessor)."

"Akhilesh Yadav's complete failure as a CM is undeniable. The ongoing family feud is a farce enacted with the aim of protecting him against the charge of incompetence. His father Mulayam Singh Yadav and the so-called adversary of the chief minister Amar Singh have together scripted this drama. Of course, it went awry and the inexperienced leader has ended up quarrelling with almost everybody in his party," Singh claimed.