Bikini a threat to India's chances of becoming a superpower, says Goa MLA

Panaji: Maharashtrawadi Gomantak Party MLA Lavu Mamledar has said that the two-piece swimwear is against Indian culture and a threat to the country's chances of becoming a superpower.

The opposition Congress has already accused the BJP-led coalition government of trying to impose restrictions on women and using bikinis as a ruse to privatise beaches. 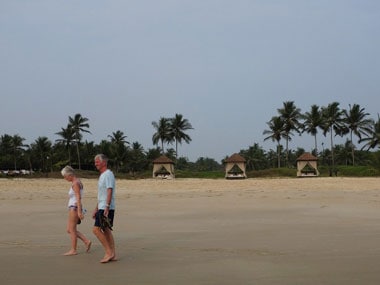 Speaking to reporters here Saturday, Mamledar said: "Everybody says India will be a superpower only on the basis of its culture and not otherwise, because India has high culture....And if we want India to be superpower, then our culture should be maintained".

He was justifying the statement he made Thursday during the monsoon session of the state legislative assembly, when he demanded that bikinis should be worn only in specially earmarked private beaches with an entry fee of Rs 1000 to Rs 2000 and not on 'public' beaches.

"The government will also get revenue," Mamledar said, adding that setting up such "bikini beaches" with paid entry would also encourage tourism in Goa.

Mamledar's ruling party colleague and Public Works Department Minister Sudin Dhavalikar had first triggered a controversy last month when he demanded a ban on bikinis, mini-skirts and pubs in Goa because these were "against Indian culture".

"They are trying to impose restrictions on women by making these statements and curb their freedom. Their real agenda appears to be to privatise Goa's beaches and make money," Congress spokesperson Durgadas Kamat told reporters Saturday.