“We have literally run a presidential campaign where we have one person right up in front. She is the fulcrum around whom we operate,” says Derek O’Brien, Trinamool’s affable vice-president and Kolkata’s quizmaster-in-chief.

We are speaking at the Trinamool office off Kolkata’s Eastern Metropolitan Bypass two days before the election. It does not yet feel like the headquarters of the party that’s planning to take charge of West Bengal in a few weeks. The pistachio green conference room is empty. Black and white portraits of Bengali luminaries, Tagore, Netaji, Nazrul Islam, line the walls, like illustrations from some government-issue text book. One man has carefully lined up four plastic chairs in the middle of the room and under the fan, and is asleep, a newspaper shading his face.

O’Brien, by contrast, is a whirl of activity. He’s thinking about organizing a foreign reporters’ press conference for Mamata Banerjee, probably a first for any candidate for Chief Minister in West Bengal. He says everyone has been calling – the New York Times, Al Jazeera, French television, Japan’s second largest newspaper, the Wall Street Journal.

But what does it mean to run an American-style Presidential campaign in a parliamentary system I ask him. Mamata is not even on the ballot. O’Brien backtracks quickly. “I am not saying we are running a Presidential style campaign. The media says we are.”

Sandip Roy, our culture editor, spoke to National Public Radio about the upcoming elections in Bengal and how it has all of Kolkata abuzz that Didi could topple the 34-year-old Communist regime in the state. Click below to listen.


I Spy an American Spy

American analogies can be hazardous to one's political health in West Bengal. More so now that the Left Front, staring defeat in the face, has pulled out its last card – the foreign hand. Forget the bathroom chappals and the white cotton sari, pay no attention to the simple house without air conditioning  – Mamata Banerjee is really America’s stooge.

“The helicopter, being used by Ms Banerjee belongs to an American company,” accused Biman Basu, the Left Front chairman. Basu pointed out his party could barely muster up Rs 5 -6 lakhs per candidate whereas the Trinamool, he alleged, was shelling out over Rs 15 lakhs.

His party colleague Anil Basu had no doubt where Trinamool was getting its money. He likened her to a whore of Sonagachi who didn’t need the small fry any more. She had her bhatar or “big client” viz. America. West Bengal’s embattled chief minister had to pause his campaign to have a press conference to dress down his foul-mouthed colleague..

“This is just Bengal’s delusion of grandeur,” scoffs Ruchir Joshi who has been writing about the elections for The Telegraph. “We need some good CIA investment. But just as foreign airlines don’t land in Kolkata these days, neither do spies. I don’t think Bengal figures in (CIA headquarters) Langley’s budget.”

There is something very American about our Mamata. For all her careful cultivation of  Bengali street cred, her candidacy wouldn’t feel out of place in American politics. And who better placed to recognize that political kinship than the Yanks themselves? In a Wikileaks cable released back in April, the American Consulate in Kolkata notes the launch of a product named Mamata:

Skepticism remains whether Banerjee's makeover truly represents a new product - cooler, more level-headed, and willing to accept outside advice - or simply the season's new political makeup. Consensus exists that she is conscientiously trying to transform her image from political maverick and firebrand to a woman ready, able and willing to lead India's fourth most populous state. Her party's public rhetoric, devoid of any anti-Americanism, and private outreach to post's officers are encouraging signs that a Banerjee-led West Bengal government will be friendlier to the United States than the current CPI-M one.

Mamta may indeed be India's very first McCandidate. Just like McDonalds repackages itself from one nation to the other – Chicken Maharaja Mac in India, McFalafel in Israel , the Croque McDo in Belgium – so  too has Mamata reinvented herself over and over again.

And her strategy is no different than any apple-pie loving baby-kissing American politico: bring in the pork, sops for the poor, woo the rich, and talk incessantly of change.

Mamata, as Railway Minister, has been the classic pork barrel politician showering her home state with so many trains it caused a veritable traffic jam in Howrah and Sealdah stations.

Hope and change is her latest avatar.

Across from her house in a congested alley in South Kolkata, there is a picture of a revolver painted on the wall. Underneath it is the party’s election slogan – Badal chai, Badla Noy (we want change, not revenge).

Mamata who joined the BJP-led NDA and then quit it and joined the Congress-led UPA is all about change. Witness her own transformation from fiery populist to good friend of business. After she drove the Tatas and the Nano out of the state, she was the poison pill of industrialization in Bengal. Now industrialists are lining up to buy her paintings for lakhs. After the Nano debacle, Amit Mitra, the general secretary of FICCI lamented the “political turn” everything had taken and commiserated with the Tatas about the trouble they had to undergo. Now he’s the Trinamool candidate against West Bengal’s finance minister. “I find the perception about Mamata Banerjee being anti-industry is entirely wrong,” he told The Economic Times blithely.

In any other part of the world, she’d be  dismissed as a flip flopper. But in Bengal, the only flip flops attached to her name are those much-vaunted chappals. Our Lady of the Bathroom Slippers is her own brand and therefore has no problem being true to it. She is, in short, McMamata.

“She rose because of the death of ideology,” says Sudipto Chatterjee, raised in Kolkata, now a senior lecturer at Loughborough University in the U.K. “After Perestroika and the fall of the Berlin Wall there was a shaming of ideology. Mamata can now position herself as a candidate for hope because ideology itself has a such a bad rap.”

Chatterjee tells a story of how the New York Times reporter John Burns came to Calcutta to do a story in the mid-90s. He met Anil Biswas, the editor of CPI(M)’s party mouthpiece and noticed a dog-eared copy of the Communist Manifesto on his table. Burns pointed out that Biswas’ chief minister was wooing American capitalists.  Biswas smiled and said “We welcome capital, not capitalism.”

The Left Front might be bedfellows with capitalists but always counted on winning the rhetorical battle when it came to ideology. But Mamata answers to nobody except herself. She cannot be held to an ideological standard and thus cannot be accused of hypocrisy. Buddhadeb Bhattacharjee, on the other hand, is still feeling the ideological fallout of Nandigram where his own police unleashed a bloodbath. In trying to be Bengal’s Deng Xiao Ping he might just become its Gorbachev instead. 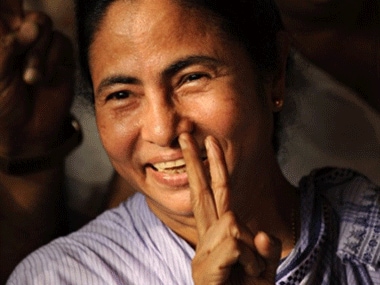 Mamata’s party platform, a glossy 55 pages, spells out her Action Agenda for the first 200 days. But nobody is voting for her because she wants to promote a cruise on the Ganga (“in line with River Thames of London, Nile in Cairo, Seine in Paris, Hudson in New York”) or a micro health insurance scheme for the poor. She is like an American presidential candidate who has to sell, not his policies, but his life story to the public.

Obama’s big hurdle was that his life story felt so foreign to many Americans. Mamata is very much of Bengal, from the lower end of the middle class. She might give the obligatory namashkar to Rabindranath Tagore but she is really a folk hero who tells Shobhaa De she relishes her aloo chop and muri.   “She is this single woman without samsara, embracing a sort of asceticism like a Meerabai,” says Sudipto Chatterjee who teaches drama. A Meerabai with Z security. “This is a remarkable performance of plebian-ness,” marvels Chatterjee. Marriage, bah, all that is faltu stuff,”  Mamata told CNN-IBN’s Sagarika Ghose. She gives off an asexual image in her white sarees. “She dresses like a widow but who is she widowed from?” wonders Chatterjee.

But what’s really put her on the cusp of toppling the Communist giant, according to historian Bharati Ray, is that she’s a fighter. “In Bengal, I am sorry to say, we are not known for courage and grit,” says Ray, once a Rajya Sabha member, now the vice president of the Indian Council for Cultural Relations. “We are intellectual, emotional, poets, and philosophers. This woman did not have the S of sophistication. But she fought.”

“She is like a figure in a reality show,” says novelist Amit Chaudhuri. “She is famous because of what she has gone through. We want people to struggle, be tortured in public and see if they survive.”

Mamata has not only survived. She has thrived. She showed the New York Times her scars. “From my belly to my back to my eyes,” she said. “I’m covered with these things.”

Obama and Mamata – It’s all about scale

Derek O’Brien might be careful to not emphasize Mamata's "American" image, but he is in no hurry to dispel that notion either. He was in New York when Obama won his election, and has obviously drawn all the right lessons. It’s no accident that Candidate Mamata is now Candidate Change. I meet O'Brien on the heels of a brainstorming session with Sabeer Bhatia, the man behind Hotmail. O’Brien is vague about Bhatia’s role, which is irrelevant. All that matters is Sabeer Bhatia is interested in Mamata and the press was invited. It builds the brand.

Two young freshly-minted IIM graduates are interning with the campaign. They are working on web architecture, they tell me. Neither are from Bengal but have been drawn to Mamata much like many young Americans were drawn to Obama back in 2008.

“This is a great period in the electoral history of West Bengal,” says Hariharan Sriram. “I want to look back and say I had a part to play.” His fellow intern, Mansha Tandon says she knows you cannot just transplant the Obama campaign to Kolkata. “There you have t-shirts, badges, Facebook quizzes,” she says. “Here your audience is rural, mass. You need a very basic website that you can load with a dial-up connection.”

“The scale is different,” agrees Hariharan. “But Barack Obama and Mamata Banerjee – in a sense they both embody a kind of hope. Each generation in any part of the world needs to have a new leader even if they are not able to do all of what they seek out to do.” Of course Obama,a freshman Senator, really came out of nowhere while Mamata who first won an election in 1984 is hardly “new”.

“The biggest learning of the Obama campaign for us is you have to manage expectations,” says O’Brien. “So everyone does not believe M for Mamata, M for Magic.” If Mamata pulls off her victory she’ll be in charge of a state that is so broke it has not been able to pay its own legislators their allowances for the past couple of months.  But if Trinamool cannot “manage” those expectations, come re-election time, Mamata may have to start hoping herself – for her very own Osama bin Laden.