Bharat Bandh: Soaring fuel prices the perfect ammunition for Congress to get Opposition unity in shape

With not much time left for the 2019 elections, the Congress is desperate to grab any issue that would catapult its campaign against the government to new heights. And this time, the government has handed the Opposition a significant issue to take to the masses — the rise in the prices of petrol, diesel and cooking gas, a subject the Centre is going to find indefensible in public domain.

If handled well, this issue shows promise of giving the Opposition an opportunity to corner the government at a very crucial juncture in its last year in power this term.

In May 2012, during the regime of the United Progressive Alliance (UPA), when the price of petrol had touched a high at Rs 73.18 a litre, the then Gujarat chief minister Narendra Modi had called the steep hike a “prime example of the failure of the Congress-led UPA”. 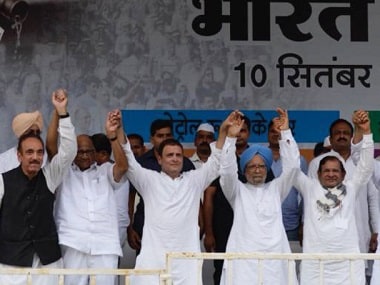 The BJP had then joined hands with the Left and called for Bharat Bandh against the rising fuel prices and later disrupted Parliament over the issue. The BJP had also rejected the UPA’s argument that the devaluation of the Indian rupee and rising crude oil prices in the international market were responsible for the rise in domestic fuel prices. “The hike in fuel prices is a result of the wrong economic policies of the UPA,” the BJP had said in 2013.

However, five years down the line, the tides have turned, and now, Congress president Rahul Gandhi, with other Opposition parties by his side, has launched a scathing attack on Prime Minister Modi and the government of the National Democratic Alliance over the exorbitant prices of fuel and the falling rupee.

This is probably the first time the Congress has succeeded in getting Opposition parties — including the Aam Aadmi Party (AAP) with whom it is at loggerheads in Delhi — together on a wide range of issues, ranging from fuel prices to the Rafael fighter jet deal and a nationwide protest.

As the Left parties have taken out a separate protest rally across the country, it was not part of the Congress-led rally at Delhi’s Ramlila Maidan.

“Obviously, we’re together with the Congress and other Opposition parties against the Modi government on the issue of fuel prices,” said Communist Party of India (Marxist) Badal Saroj. “As per our schedule decided earlier, we’re staging a separate countrywide protest.”

One corrective action that the Congress took this time was to give space to other Opposition parties, including AAP, on the dais on Monday, even though it was a Congress-led rally.

The Congress has claimed that 21 political parties, including the Samajwadi Party and Bahujan Samaj Party (BSP), have backed its call for a Bharat Bandh on Monday.

However, a number of political analysts strongly feel that it is the burning issue of the fuel price rise that has forced Opposition parties to join hands with the Congress.

“It’s a perfect opportunity for Opposition parties, and it’s the issue that has united the Opposition. Both the Congress and other Opposition parties will benefit from this anti-BJP stand. Their focus is to get prime minister Modi out,” MD Nalapat, a political analyst and geopolitics professor at Manipal University, told Firstpost.

“The BJP has been repeating the same mistake Telugu Desam Party chief N Chandrababu Naidu made by following policies of the World Bank and International Monetary Fund, and he lost the 2004 election of undivided Andhra Pradesh,” he added.

The most important question that needs to be answered now is whether these Opposition parties will rally behind the Congress for the 2019 Lok Sabha elections, as well.

The Samajwadi Party and BSP were conspicuous with their absence at Delhi’s Ramlila Maidan on Monday, despite assuring support to the Rahul-led bandh.

Addressing the protest rally, Manmohan Singh said: “Circumstances show that the situation has gone beyond control now. Farmers, businessmen, youth — all are facing a crisis in their respective fields. The government has failed miserably in fulfilling the promises made to the common people. The time has come to change the party at the Centre, and this will happen very soon.”

Although the Congress has been successful in garnering the support of a large number of Opposition parties for the BharatBandh, there is no guarantee that this tempo will continue till the 2019 elections.

“However, I don’t see the Opposition uniting behind the Congress during the 2019 elections or supporting the party’s prime ministerial nominee, if the Congress announces one,” Nalapat added.