Atal Bihari Vajpayee passes away: Ex-PM's funeral procession was a tribute to how he had built BJP

It was rare to see a serving prime minister and almost the entire top leadership of the ruling dispensation disregard security and health-related concerns, as voiced by security and intelligence agencies, to show the reverence they had for the former prime minister. The last journey of the departed leader, who on many occasions had supported and even mentored some of them and guided them through thick and thin, was clearly an emotional moment for them. 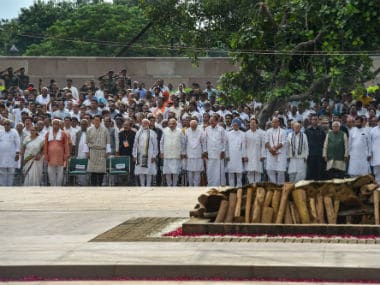 Modi also wanted to convey a message that he cared and respected for his elders. He had been there thrice at AIIMS in the last 18 hours of Vajpayee's struggle against death. He had stood at the gates of BJP headquarters along with Shah, Rajnath Singh and Yogi Adityanath to receive the mortal remains of Vajpayee.

The long march by Modi and the rest of BJP leadership behind the carriage carrying Vajpayee's body was perhaps symbolic of the long march Vajpayee had in his life time – from the time he became an MP in 1957 till he breathed his last on Thursday evening. The tallest icon of the Sangh Parivar deserved a befitting tribute from his successors in the party.

Vajpayee was persuaded to become president of Bharatiya Jan Sangh (erstwhile form of Bharatiya Janata Party) in 1968, shortly after the then president and biggest ideologue of party and ideological Parivar, Deen Dayal Upadhyay, died under mysterious circumstances at Mughal Sarai station. Upadhyay was 52. Vajpayee was only 44 years old when the responsibility of the party leadership was thrust on him. Upadhyay's death had virtually orphaned the young party and the cadre had become listless.

Vajpayee, assisted by LK Advani, gradually built the party brick by brick and in 1977, on the insistence of Jayaprakash Narayan, merged Jan Sangh with Janata Party. He was foreign minister in the Morarji Desai government. But after the fall of the Janata Party government, Vajpayee had the grit to separate from the Janata Party on dual membership issue and form Bharatiya Janata Party in 1980.

His contribution to the BJP and Indian polity is four fold – first, removing the untouchability tag from BJP. In 1998 and in 1999, when he became prime minister, he had the support of around two dozen regional allies. Second, he was the first non-Congress prime minister to have served in office for a full term. Third, he successfully ran a stable coalition government at the Centre and fourth, he made Indian polity bipolar where one pole would be the BJP and the other would be the Congress.

The party has only grown from the foundation he laid and the structures he built. As BJP president and even as prime minister, to him, party headquarters meant 11 Ashoka Road. Under Modi-Shah dispensation, party headquarters has moved to a bigger and modern premise of its own on Deen Dayal Upadhyay Marg.

At party headquarters, a huge cut out of Vajpayee with a line from his poem “Lautkar aayonga, kuch se kyon daroon (I will come back, why should I be afraid of going on?)" conveyed the message required: the former prime minister was obviously not going to return in physical form but his soul, his legacy would always be alive there as founder-builder of the party, which is now the ruling party in India.