BJP president Amit Shah is in Jind, Haryana, to take part in ‘Yuva Hunkar’ rally, which is going to see the participation of more than one lakh motorcycle riders today

BJP president Amit Shah arrived at the venue in Pandu Pindara village near Jind to take part in the  Yuva Hunkar rally.

Ashok Tanwar, president, HPCC, was taken into custody for showing black flags to participants in Amit Shah's bike rally in Jind. Tanwar was taken to custody along with his supporters.

Haryana chief minister Manohar Lal Khattar has reached the rally venue and is waiting for BJP party president Amit Shah who will arrive by helicopter.

Haryana's anganwari workers have assembled in large number near the National Highway at Kurukshetra district, and threatened to disrupt traffic. They have been demanding a pay hike and had issued threats against the visit of Amit Shah in the past as well.

While Amit Shah is yet to arrive at the venue to take part in the Jind bike rally, expensive bikes made a beeline at the venue. Interestingly, Haryana chief minister Manohar Lal Khattar had advocated austerity to its ministers and supporters.

Union Steel Minister Birender Singh, Haryana Finance Minister Captain Abhimanyu and Ambala BJP MP Rattan Lal Kataria have arrived at the venue. They are current on the stage of the Jind bike rally to be addressed by BJP Chief Amit Shah.

Haryana Pradesh Congress Committee Chief Ashok Tanwar was detained by state police while marching towards the Amit Shah bike rally in Jind. Tanwar was carrying black flag as a mark of protest.

Several INLD workers were detailed by paramilitary personnel at Tohana in Fatehabad district and Narwana in Jind district after they attempted to show black flags to BJP leaders riding motorcycles to Jind. Over 1 lakh bikers are expected to take part in  Yuva Hunkar rally which will see the participation of BJP president Amit Shah and Haryana CM Manohar Lal Khattar

Scores of INLD workers were taken in custody at Jind for protesting against the Amit Shah bike rally in Jind, Haryana. The protesters were arrested by Haryana Police for showing black flags to the bikers riding as part of the rally.

Heavy security arrangements are in place in Jind where 37 companies of paramilitary forces are deployed to thwart any attempt to disrupt BJP chief Amit Shah's bike rally. Jat groups and Opposition parties have threatened to show black flags to Shah.

Apart from taking part in the bike rally, BJP president Amit Shah is also scheduled to inaugurate party office in Jind district and will lay the foundation stone for 15 district offices.

Jind has been decked up to host Amit Shah's bike rally

Haryana's Jind has been decked up to host BJP present Amit Shah's motorcycle rally. Heavy security arrangements have been made with 37 companies of paramilitary forces.

BJP chief Amit Shah is in Jind for his ‘Yuva Hunkar’ rally which is going to see the participation of more than one lakh motorcycle riders today. The rally is being seen as an attempt by BJP to consolidate its hold in Jind which is considered to be the nerve centre of Haryana politics.

The Party has made it mandatory for its MLAs from all 90 constituencies and local leaders to reach on bikes in full strength. Shah will reach Jind from Delhi while Haryana CM Khattar will arrive from Karnal. Both the BJP leaders will arrive in a chopper and later on bikes till rally ground at Pandu Pindara village of Jind district.  Hundreds of bikers wearing saffron colour helmets, clothes are on bikes on the way to Jind.

Empty chairs at the venue 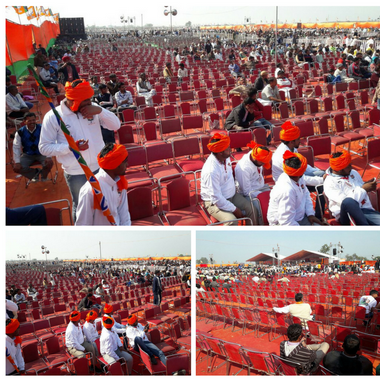 Images of empty chairs being shared on social media

While the BJP is basking in the glory of success of the Hunkar rally, photos of empty chairs at the venue are being shared on social media. 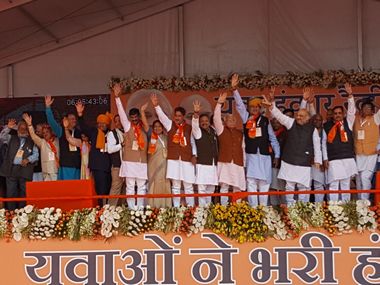 Amit Shah pats back of Khattar, lauds him for completion of four years in power

On stage, BJP chief Amit Shah patted the back of chief minister Manohar Lal Khattar for the completion of four years of the party in power in Haryana.

Former Congress minister Subhash Batra addressed a press conference in Rohtak and alleged that the BJP has misused the government machinery to make their party rally successful. "Its shocking that Haryana is facing an Emergency-like situation, just because their party chief has come to address a rally", he said.

The BJP chief has ended his address.

Opposition members released black balloons in Jind district near the rally site to register their protest against the BJP party rally. 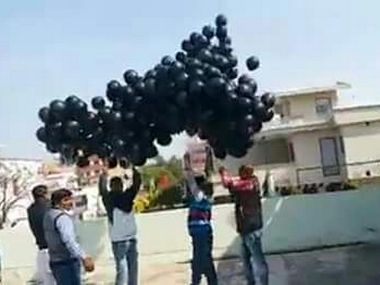 BJP will form governments in two more states in next two elections: Shah

Shah claimed that BJP governments will be formed in two more states in the next two elections, and the tally of states in which the BJP is in power would go up to 21 from 19.

No need to give progress report to Congress: Amit Shah

The BJP chief has said, "The Congress has said that when Amit Shah comes, he should come with a progress report of four years. There is no need to give a report card to Congress, but we need to give details to the public of Haryana."

Amit Shah along with other BJP leaders at the rally. 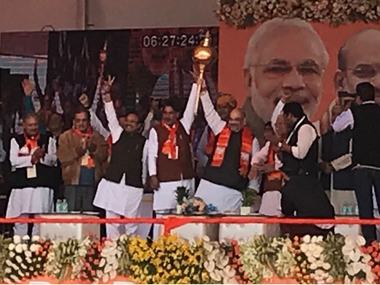 BJP president Amit Shah arrived in Jind, Haryana, to take part in ‘Yuva Hunkar’ rally, which is expected to see more than one lakh motorcycle riders today. The BJP chief rode a pillion amid tight security to the venue at Pandu Pindara village, on the outskirts of the Jind city, after his chopper landed on Thursday afternoon.

The rally is being seen as an attempt by the BJP to consolidate its hold on Jind and adjoining areas. Jind is considered to be the nerve centre of Haryana politics. Acording to reports, hundreds of bikers wearing saffron colour helmets, clothes were on bikes on the way to Jind.

Haryana chief minister Manohar Lal Khattar who is personally overseeing the arrangements has already arrived at the venue.

"All necessary arrangements for tomorrow's rally have been made," the Haryana chief minister told reporters.

According to the claims of BJP leaders, over one lakh bikers will participate in Shah's rally.

The Party has made it mandatory for its MLAs from all 90 constituencies and local leaders to reach on bikes in full strength.

Tight security arrangements have been made in view of the rally, officials said. Armed jawans could be seen in different parts of Jind and some adjoining towns, including roads leading to the venue at Pandu Pindara village, on the outskirts of the Jind city.

A few Companies of paramilitary forces have also reached Jind. Police and security forces have been put on alert to prevent any untoward incident taking place during the rally.

The All-India Jat Aarakshan Sangharsh Samiti had earlier withdrawn their proposed protest rally in Jind tomorrow after talks with Khattar and Union Minister Birender Singh on Sunday night. The opposition parties, however, decided to protest in a peaceful manner.

State AAP chief Naveen Jaihind has announced presenting 'pakodas' to Shah over the BJP's alleged failure to generate the promised three lakh jobs for the youth in the last three years. Main opposition INLD had announced it will show black flags and balloons to protest failure of the BJP government on various fronts including the SYL canal issue.

Haryana: Three migrant labourers killed after being run over by truck in Jhajjar

The police said the truck loaded with coal rammed into the median divider and turned turtle after the collision, hitting those sleeping at the spot