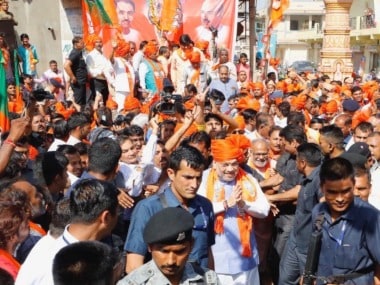 Lok Sabha Election 2019 LATEST updates: BJP president Amit Shah, who is contesting the Lok Sabha election from Gandhinagar seat, took out on a roadshow in the city before which he asked those present there to chant "entire Kashmir is ours." Garlanding photographs of Jan Sangh founders, he asked people present to say, "Jaha hue balidan (SP) Mookerjee, woh Kashmir hamara hai, sara ka sara hamara hai." This translates to "where Mookerjee sacrificed his life, that Kashmir is ours, entire Kashmir is ours."

Congress chief Rahul Gandhi, speaking at Haridwar in Uttarakhand, slammed the BJP once again for doing away with party veteran LK Advani. He said that Narendra Modi has kicked out his guru and yet has the temerity to talk on Hindu dharm in which the guru is the most important thing.

Rahul also sought to reply to many of the charges brought against him by the likes of BJP leaders and especially Narendra Modi, in campaign speeches.

BJP veteran Uma Bharti's Jhansi seat has gone to Anurag Sharma in a new list of 24 candidates released by the BJP for Odisha, Haryana, Uttar Pradsh, Rajasthan and Madhya Pradesh. Bharti had earlier written to BJP president Amit Shah, repeating her decision not to contest the elections.

Narendra Modi, addressing his first rally in Chhattisgarh since the Election Commission announced the dates of the polls, at Balod, once again referred to the Congress manifesto, saying that it tries to take away from the army's freedom and referring to it as a 'dhakosla patra'. He also mentioned the chopper scam and asked his audience repeatedly if the state government has fulfilled its farm loan waiver promise.

"In Odisha, from where I am coming, Congress leaders are running around, looking for parties to join," he said.

UPA chairperson Sonia Gandhi, addressing the Congress's Jan Sarokar rally 2019 in Delhi said when the UPA was in power, civil society had been in sync with the Manmohan Singh government. She also slammed the present BJP government, saying that a "new definition of patriotism" has risen now. "Those who do not accept diversity are being called patriots," she said.

"I have no doubt that the promises being made by the Congress now will be realised in their entirety if the party is voted to power," Sonia added.

Speaking at a rally in West Bengal's Alipurduar, Trinamool Congress chief Mamata Banerjee called Prime Minister Narendra Modi a "liar". "TMC will lead the formation of new government at the Centre after defeating Modi. You didn't look after your wife. How will you look after the masses," the Bengal chief minister asked.

A delegation of the Indian Union Muslim League (IUML) on Saturday lodged a complaint with the Election Commission of India against Uttar Pradesh chief minister Yogi Adityanath over his remarks on the party. “We came today to Election Commission of India to lodge a complaint with regards to the tweets and statements made by Yogi Adityanath, leaders from the BJP and its allies including Delhi MLA Manjinder Singh Sirsa and the troll army of the BJP. They are calling us virus, terrorist and calling our flag a Pakistani flag. Such statements are maligning us,” IUML national secretary Khurram Omer said.

Speaking at his second Odisha rally of the day, Narendra Modi extolled the virtues of Odisha and asked why the BJD government has not been able to make the most of the natural resources of the state. "What Congress did at the Centre, Naveen babu's BJD government has done to Odisha," he said.

After nearly three decades with the BJP, actor-turned-politician Shatrughan Sinha, who had been unhappy with the saffron party, formally joined Congress in the presence of Randeep Singh Surjewala, KC Venugopal and several other senior party leaders on Saturday.

Speaking in Sundargarh, Narendra Modi on Saturday invoked everything from the formation of Chhattisgarh and Jharkhand to the Naveen Patnaik government's disavowal of the Ayushman Bharat scheme to highlight the BJD government's failure. "Odisha has remained away from the ambit development, but not anymore, your chowkidar has resolved to make your situation better," Modi said.

Invoking the names of BJP leaders like Atal Bihari Vajpayee and LK Advani, Prime Minister Narendra Modi, at his rally in Sundargarh in Odisha said, "BJP is the country's largest party." He stressed that everyone from women to dalits to adivasis are with the party.

"The BJP was formed out of the sacrifice of karyakartas," said Narendra Modi, adding that in Bengal, BJP workers are allegedly routinely killed. Modi spoke on the BJP's Foundation Day, invoking the ethos of the party and holding forth at length on how much the party has "soldiered on" with courage.

Delhi Congress chief Sheila Dikshit, state in-charge PC Chacko and other Delhi Congress leaders are in a meeting at party chief Rahul Gandhi's house to discuss whether an alliance between Congress and Aam Aadmi Party will solidify at all. Sheika Dikshit has voiced her disagreement with the alliance earlier.

With every day ahead of the first phase of the Lok Sabha election crucial for political parties in building a last-minute rapport with the electorate, it is no wonder that the Bharatiya Janata Party and its Opposition forces will make good use of Saturday, on the campaign trail.

Prime Minister Narendra Modi will address rallies in Odisha's Sundargarh and Subarnapur. The BJP has concentrated its efforts on the Biju Janata Dal-ruled state which will see simultaneous Assembly elections. Uttar Pradesh chief minister Yogi Adityanath will also address rallies in Odisha's Phulbani and Berhampur districts. Adityanath is expected to reply to the Election Commission which had sent him a notice regarding his reference to the Indian Army as "Modi ji ki sena" at an earlier rally.

The prime minister will also speak in rallies at Nanded in Maharashtra and at Balod in Chhattisgarh.

Congress president Rahul Gandhi will campaign in Jammu and Kashmir's Srinagar and address public meetings at Almora and Haridwar in Uttarakhand. Congress general secretary Priyanka Gandhi will also be on the campaign trail with a roadshow at Fatehpur in Uttar Pradesh. Former BJP MP Shatrughan Sinha is expected to formally join Congress on Saturday, after 30 years with the saffron party.

BJP president Amit Shah will address a rally in Gandhinagar, the constituency he is fighting the General Elections from.

West Bengal chief minister Mamata Banerjee will address public meetings at Barobisha and Kalchini in Alipurdar, while Bahujan Samaj Party chief Mayawati, who has been critical of both the Congress and the BJP, will be speaking to the public at Haridwar and Nainital.