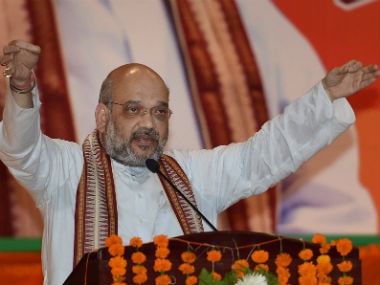 Shah will begin the day by addressing a rally at Vyara in Tapi district at around 11.30 am. His next stop will be Bardoli in Surat, where is expected to speak at 1.30 pm. Shah's third rally will be at Maroli in Jalalpur in Navsari at 4 pm. Shah's last rally for the day will be Gandevi in Navsari at 5.30 pm.

On Sunday, Shah had addressed rallies in Mandvi and Mahuva in Surat district as well as Rapar and Anjar in Kutch district. Speaking at Rapar, Shah attacked the Congress for questioning vikaas in Gujarat and said, "Those questioning us should also answers as to why they did not help in Gujarat's development between 2004 and 2014." Speaking about tribal welfare, Shah said that while Congress alloted "zero budget" for tribal welfare, the BJP has allocated Rs 67,000 crore for them. Tribals form 14 percent of the total population of Gujarat. Addressing a rally in Kutch's Anjar, Shah added that the Gujarat government helped in bringing over six lakh acres of land into cultivation. he said that the Gujarat government has provided electricity to over 1.6 lakh tribal homes. Shah targetted Congress for lacking any kind of agenda for the state, while adding that the Gujarat government has implemented "Skill India" to provide jobs to over nine lakh youth.