New Delhi: Activists of the All India Mahila Congress on Tuesday staged a demonstration at Jantar Mantar and slammed the Centre over its alleged "anti-women" policies. 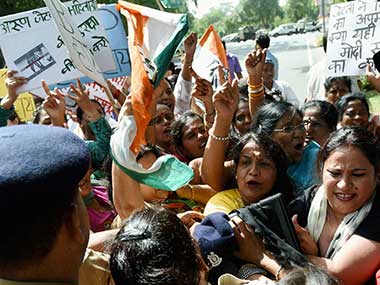 The demonstrators participating in the protest tried to march towards the Parliament building but were stopped at a police barricade.

"Crime against women has increased by 30 percent under the Modi government. Imposing GST on sanitary napkins exposes the insensitivity of the government towards women," said Shobha Oza, national president of the Mahila Congress.

She said that Mahila Congress is pledged to expose the "anti-people" policies of the Modi government and uproot it in the Parliamentary elections in 2019.