Amid Shaheen Bagh protests, budget and upcoming Delhi elections, an important development has gone quite under the radar that may have far-reaching consequences and leave an indelible mark on India’s polity. As the date of execution of the four convicts in the 2012 gangrape-murder case keeps getting postponed, the delay subverts justice, denies retribution and incentivises vigilante action of the kind we witnessed in Hyderabad encounter killings.

On Sunday, the Delhi High Court reserved its order on a plea challenging the stay on the execution of the convicts who raped, tortured and inflicted catastrophic injuries on the 23-year-old Delhi student, on the night of 16 December, 2012. Grievously injured, she died a few days later. The crime shook the nation and forced the government to enact tougher new laws, including introducing death penalty in ‘rarest of rare’ cases, widening the definition of “rape”, adding “stalking, spying and acid attacks to a list of specific crimes against women; and require jail time for police who fail to register assaults or who commit them themselves.” 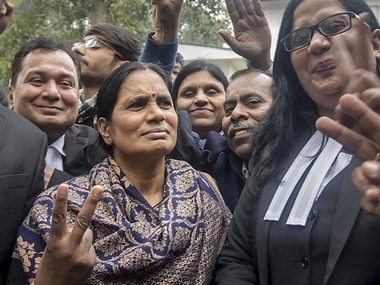 All this sounds good, but the problem lies in implementation. The 2012 victim’s case was put on ‘fast track’, yet more than seven years have passed, and the victim’s mother is still crying for justice. The four convicts — Mukesh, Pawan, Vinay and Akshay — were given the death penalty by the Supreme Court in May 2017. One of the convicts committed suicide while serving jail time while the sixth, a minor during the execution of the crime, was let off after serving three years in a correctional home.

What we have here, therefore, is a case where four convicts who unleashed one of the brutal crimes that posed a challenge to India’s moth-eaten criminal justice system, successfully employing through their legal team every option in the book to delay execution of the sentence and frustrate all attempts at administering of justice.

For instance, while Mukesh has exhausted all possible options including clemency from the President of India, three of his fellow convicts are yet to exhaust theirs, and they are coordinating their moves in a way so that execution remains repeatedly (and perhaps indefinitely) postponed.

It is important to stress here that the all these are happening within the constitutional and legal framework, and the death row convicts are legitimately exercising their rights which the Indian state’s legal system allows them to. For instance, while the convicts were to be hanged till death on 22 January, the date was postponed till 1 February as Mukesh filed his mercy plea. Even as that date was finalised and a black warrant issued, a Delhi trial court passed an order postponing the execution of sentence sine die till further orders.

The Tihar jail authorities, according to reports, appealed for the separate hanging of the convicts, the court turned down the plea, maintaining that if an appeal or an application is made by one convict, the execution of sentence shall be postponed in the case of co-convicts as well. Worth noting here that while Mukesh has exercised all his legal rights, Akshay hasn’t sought clemency yet while Pawan has not yet moved any curative petition before Supreme Court.

Additional sessions judge Dharmender Rana, in his order, observed that “without commenting upon the dilatory tactics adopted by the convicts, suffice it would be to state that seeking redressal of one’s grievances through procedure established by law is the hallmark of any civilised society. The courts of this country cannot afford to adversely discriminate any convict, including death row convict, in pursuit of his legal remedies, by turning a Nelson’s eye towards him.”

Following this development, the Centre filed a plea against the stay on execution, and an order on that was reserved by Delhi High Court on Sunday. Worth repeating here that even death row convicts have legal rights, and it is part of the judicial process to allow them the benefit of a lengthy appeal and review process. Taking of life by the state even in nations where the provision exists is not an easy decision, and these safeguards are inevitable and necessary.

And yet these rights militate against the rights of a victim, the need for natural justice to be served and seen to be served, and in a state where inordinate delays are caused due to apathy, lack of state capacity and artificial barriers to justice, these delaying tactics by the convicts act as a force-multiplier and take away the retributive, deterrent nature of justice.

What answer does the State has when the victim’s mother, who has been doing the rounds of courts for the last seven years to ensure that perpetrators of the heinous crime face the consequence of their actions, breaks down before the media and says the convicts will never be executed?

Here, the delay renders the punishment meaningless. As Vrinda Bhandari writes in Firstpost, “For the law to govern, the system through which it is administered must measure up adequately when mapped against the three dimensions of justice– substantive justice on merits, timeliness in the disposal of cases, and proportionate use of the State’s resources.”

The delay and barriers to justice lead to denial of civil-political rights, corrodes the link between crime and punishment, highlights the gap between rule of law and judicial procedure and ultimately, erodes public faith in India’s criminal justice system.

In his article Death Delayed Is Retribution Denied, Russell L Christopher of University of Tulsa argues while quoting scholars Carol and Jordan Steiker, “extending the time between sentence and execution undercuts two of the most pressing pro-death-penalty arguments: deterrence and retribution.”

The combined effect of procedural delays, the pendency of cases in courts convoluted procedures and inconsistent application of the law results in cynicism among the public over India’s criminal justice system, and this paves the ground for vigilante justice.

The Hyderabad case, where four men accused of gang-raping and charring to death a 27-year-old vet were “killed in an encounter” with police in December last year, saw cross-section of Indians from ordinary people, politicians, celebrities to sportspersons greet the extrajudicial killings with celebrations and support for men in uniform.

Among those who congratulated the Hyderabad cops was the Delhi victim’s mother Asha Devi, who called the news “ointment to her wounds”. “At least one daughter has been served justice. I thank the police. I have been shouting for seven years, punish the culprits even if it needs to be done by breaking laws and then see how the society changes for good,” she was quoted as saying.

There are no easy answers or quick fixes to ethical, moral, legal and institutional crises that India faces over its criminal justice system. Administrations so far have proven to be inadequate and lacking in vision and political will to carry out deep-seated reforms in judicial, police and criminal justice spheres. Asha Devi’s nightmare won’t end anytime soon.