Mumbai gangrape: 'My daughter did not know the names of attackers'

Recounting her brutal rape last month, the Mumbai photojournalist informed her mother that she was assaulted by five men, whose names she did not know. According to the statement of the girl's mother, at around 7:30 pm on the fateful day (August 22), she called her daughter on mobile.

The statement is part of the chargesheet which Mumbai police on Thursday filed in the photojournalist's rape case against the five accused. The crime took place at the deserted premises of Shakti Mills in central Mumbai. 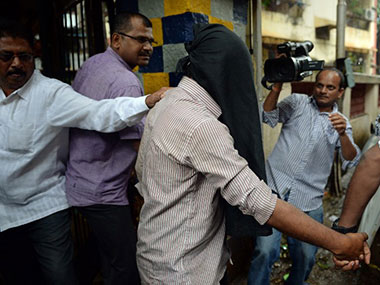 One of the Mumbai gangrape accused after being arrested. AFP

As the girl was crying inconsolably, her mother asked her to give the mobile to somebody else, after which she spoke to the girl's friend.

"When I went to the casualty room I saw my daughter crying there and seeing me made her cry more," the mother says.

"When I asked her what happened (the survivor) said that she has been forcefully raped by five persons," the statement adds.

When the mother asked about the identity of the accused, the girl said, "Mummy I don't know their names I know only their description."