According to the report, call data records of the accused show that over the last month, Bangali was in touch with a police constable posted at the Agripada police station.

"We were analysing Kasim's CDRs while trying to trace him, and were going through the contacts he has had the most number of conversations with... A number that figured nearly 60 times in the CDRs of the last one month belongs to a constable with the Agripada police. We made further inquiries after his arrest and learned that he was an informant," an officer of the Mumbai Police Crime Branch told The Indian Express.. 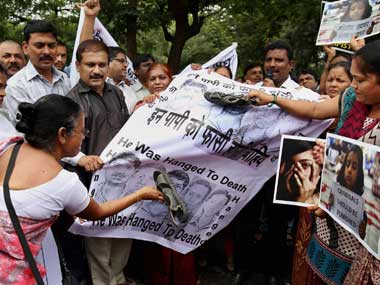 The main accused in the case, Kasim Bangali, was a police informer. PTI

In fact, this constable even called up Bangali after the gangrape was reported, asking him to meet him for some personal work. Bangali however got suspicious and went into hiding. He was later arrested by the Mumbai Police from the Nair Hospital in Mumbai Central.

Bangali's mother had on Monday come out in defence of her son saying he was a minor. She however failed to provide any documents to prove her claim.

Meanwhile, having arrested all five accused, Mumbai Police officers now say a key witness could be a ragpicker who may have witnessed the incident at Shakti Mills in Mahalaxmi.

According to a report in the Hindustan Times, the police are looking for a ragpicker who they believe passed the crime scene while the photojournalist was being raped.

"We are gathering details about this ragpicker. If we find him, it will help prove the crime," a police official told the Hindustan Times.

Reiterating that the case would be tried in a fast-track court, Mumbai Police Commissioner Satyapal Singh said the chargesheet in the case would be filed as early as possible and they would seek maximum punishment for the accused.

"The crime is very serious, but Mumbai is not unsafe," Singh said, seeking to reassure citizens that the city continues to be among the safest in the country.

Significantly, one of the accused has reportedly confessed that he raped at least four other women at the same spot during the past month. Investigators believe that the fact that these four cases went unreported may have emboldened the accused to commit another rape.

Firstpost had on Monday argued that the popular outrage to the crime is perhaps influenced by the class of the survivor.

Would we have cared as much if the four poor women did report the crime? The police, notoriously unresponsive in matters of rape, may scramble into action on a headline-making case, but is unlikely to show such alacrity when the victim is a lowly rag-picker.

You can read the article here.