Victims of an unfinished city: Lavasa's regulations row has left villagers fighting for their land

Nestled within the picturesque Western Ghats, the Lavasa township near Pune, Maharashtra is unlike any other hill city of India. As one drives up a smooth road amid the monsoon greenery,  a clean and well-planned township is in sight. But on a closer look, Lavasa is bereft of the most basic constituents of a residential town like this – people.

Embroiled in a series of controversies related to the acquisition of land and lack of environment clearances over the past 10 to 15 years, the project, touted to be India’s first private hill city, has been facing an uncertain future. With skeletal population, it is a ghost town with ready to move into apartments that are empty, unfinished construction or buildings vacated by their occupants.

The villagers who gave up their land for Lavasa have for several years been protesting against the project for duping them and cheating them of their land. Just as people and life in general are missing in the ghost town of Lavasa, perhaps the affected people and their needs are also invisible to the authorities, they point out. An overview of the Lavasa city. Photo by Mayank Aggarwal.

The city was planned across 25,000 acres in 18 villages of Mulshi Taluka which is 50 to 55 kilometres away from Pune. But over the years, the project faced numerous legal cases of usurping the land of villagers and violating environmental conditions. The difficulties took a toll and the project ran out of steam.

In August 2018, the National Company Law Tribunal (NCLT) had accepted a petition to declare the Lavasa Corporation Limited bankrupt and find a solution to its financial mess worth nearly Rs 60 billion (Rs 6,000 crores). In August 2019, a Pune based buyer had expressed interest in taking over the project for about Rs 5.4 billion (Rs 540 crore) but no solution has been finalised as yet.

Tanaji Margale, a resident of Dudhwan village, one of the 18 villages from where land was acquired for the Lavasa project, highlights the irony as the villagers struggle for basic facilities right next to the luxury township styled on Italian hill towns.

“Land was acquired from our village Dudhwan as well, for the Lavasa project. But still, there are people who are living in the village and need basic facilities. No one hears our demand for basic facilities like a road to our village or drinking water. To reach our village, one has to climb the hill for at least three kilometres from the motorable road,” Margale, who is a farmer and still holds land in Dudhwan village, told Mongabay-India.

“We do not exist for the administration. There are agents who threaten us to give up our land stating that the government will anyways never give them any facilities. They killed our hills and damaged the forests and the water facilities. Elections or no elections, no one including the politicians is bothered about us. They know our number is small and that is why our votes are of no consequence to them,” said Margale. He informed that his village’s current population is less than 250 people, and that of the 18 villages in Lavasa is less than 10,000.

Margale, however, stated that the people will fulfil their constitutional right of voting even if they vote for NOTA.

Elections for the 288-member Maharashtra legislative assembly are scheduled on 21 October, 2019, and the results will be declared on 24 October. Lavasa falls under the Bhor assembly constituency and is currently represented by a leader of the Indian National Congress. This would be the first state elections after the town management is declared bankrupt. But fixing a botched up private township plan, which took off with controversial links to a political party, is probably not on the agenda for any of the parties that will come into power.

The abandoned town is decaying

Until some years ago, events like a vintage car rally or a motorcycle rally were being held in Lavasa. Now, the town sees a trickling of visitors, particularly on weekends, as youngsters and families come from Pune or nearby towns for a day picnic.

The town is decaying and the signs are visible all over. There are abandoned and unfinished buildings across the town. For instance, Fortune hotel which operated in Lavasa for years was recently closed. Apart from a couple of guards to look after thousands of square metres of the property, human presence is rare.

Similar is the fate of many once-occupied buildings. There is overgrown grass, unkempt roads and empty boats tied in the corner of the lake around which Lavasa was built.

Construction material is left unattended and unguarded at most of the under-construction buildings. Unfinished and abandoned buildings in the Lavasa city. Photo by Mayank Aggarwal.

But some people are still trying to find a solution and protect the life savings that they invested in the project. For instance, in June and July 2019, hundreds of people, who had invested in property in Lavasa, have sent petitions to the Prime Minister’s Office (PMO) for help. Some people had even started online petitions to save the project.

“This project was good and everyone was good at their job but since the time the project got shelved everyone has lost the work that they were getting. But today there is no work,” said Sharad Patil, who used to work as a supervisor for civil works when the city’s development was in full swing.

Former Indian Police Service (IPS) officer YP Singh, who is now a lawyer, explained to Mongabay-India that the project was bound to fail.

Some of the environmental violations that people had pointed out in the project included haphazard cutting of hills, construction of buildings too close to water sources and forcible acquisition of land of tribal people.

Villagers have no hope from the administration or politicians

Mongabay-India recently visited the area in September 2019 and spoke with several villagers who have lost their land to the project and those who fought and got their land back.

“The company (Lavasa) displaced my family from our ancestral land and our forests but it could not deter us from fighting for justice. We were ready to lose our life but not the land. We fought them and ensured that we secured our land back from him. None of us gave the land. Our fight ensured that other villagers do not face a poor fate,” Leela Bai of village Mugaon told Mongabay-India.

Mugaon is one of the 18 villages where the next phase of development activity in the Lavasa project was scheduled to take place before things took a nosedive. There are several fields as well where construction material was thrown without permission from farmers. 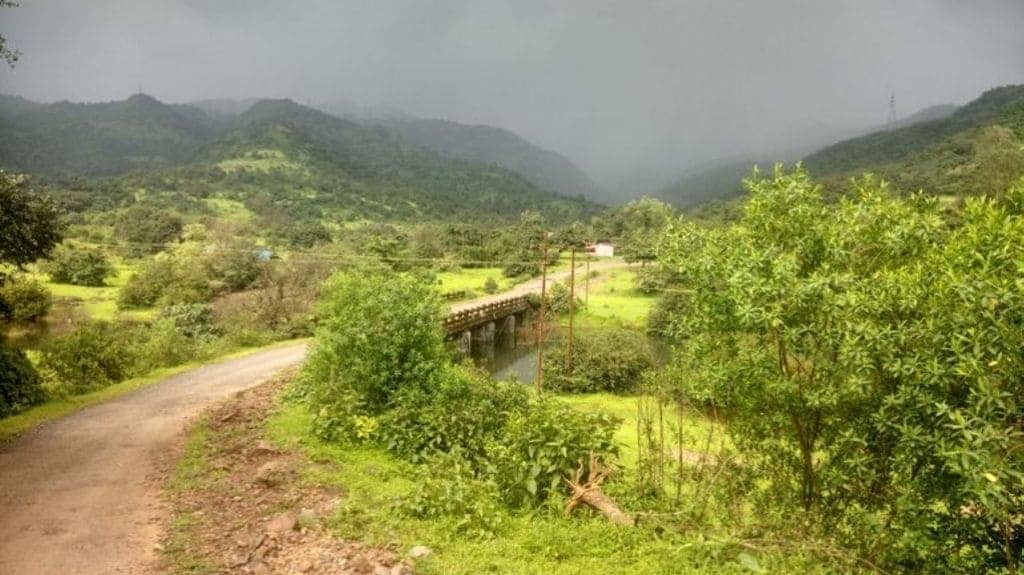 Mugaon village where the next phase of development of Lavasa was expected before it ran into a financial mess. Photo by Mayank Aggarwal.

Even today, there are several unfinished buildings lying vacant near Mugaon.

When the project had started, promises were made to villagers for education, health and imparting other skills. But villagers allege that all such promises never took off and all they got was booted out from their land.

Kondiba, a farmer of the Mugaon village, said his family lost his land and no one came to rescue.

“We have no idea how our land (about 8.5 acres), which was in our father’s name, was taken away. They even dumped construction material on our fields. We are today forced to earn by doing labour and dairy work to run our lives. There is no construction taking place right now but even if it starts, we won’t go anywhere as this is our ancestral land,” said Kondiba, who earlier used to do paddy farming.

There are many similar cases where the land of farmers was taken away by agents without giving the people proper compensation or on the pretext of false documents.

Gangaram Margale, another resident of Mugaon village, is still fighting the case regarding his land in court.

“We had agreed to sell four acres but the agents cheated us and took all our 14 acres of land. We never got our compensation. Though I am fighting the case, I have to depend on labour work to sustain our life,” Margale told Mongabay-India.

The villagers even highlighted there were cases where someone who died in the early 1990s was shown to have signed papers for selling the land in the 2000s.

Another villager, Laxman Kokhre, who had 14 acres of land, said they have no idea who got money for their land.  “Our land was shown to have been bought from someone else and compensation money was given to them. We don’t even have money to file a case,” said Kokhre, who is now working in fields of other farmers to earn a living.

The villagers expressed disenchantment with the elections as well and said no one comes to their village. Around 10,000 people live in the 18 villages from where land has been used for the Lavasa project. Photo by Mayank Aggarwal.

They said no leader is bothered about them and it is only the lower rung representatives of the legislators or parliamentarians that come to their place. They alleged that votes of many villagers are bought with alcohol and money which is accepted by the villagers who have already succumbed to the fact that the elections are anyways not going to help them.

Suniti SR of the National Alliance of People’s Movement worked on the issue of Lavasa with the project of affected people in the valley explained to Mongabay-India that the Lavasa project impacted hundreds of farmers and tribal people of the area.

“A total of 1.08 TMC (thousand million cubic feet) water was allotted to the Lavasa company for their Lake City Project itself even when Pune was facing drinking water shortage. Farmers lost fertile agricultural land in the Varasgaon Dam for ‘public purposes,’ which was given to Lavasa on lease. Land of a lot of farmers was fraudulently taken away from them. There were so many environmental irregularities as well. We succeeded in stopping the project at 2,000 hectares which was proposed to be on over 10,000 hectares. We also regained around 94 hectares of tribal land grabbed by the project,” said Suniti.

“Their Special planning authority was cancelled by which they were violating town planning and environment laws and rules. Now it is facing bankruptcy and is reportedly looking for buyers. Now is the time to struggle for the village-based, sustainable development with the local people’s participation, and we are focusing our efforts to that effect for issues like education, health and drinking water. Their struggle continues,” Suniti added.

An official of Hindustan Construction Company, which founded Lavasa, refused to comment stating that the project is facing proceedings at the NCLT and expressed its inability to comment on the issues connected to the project.