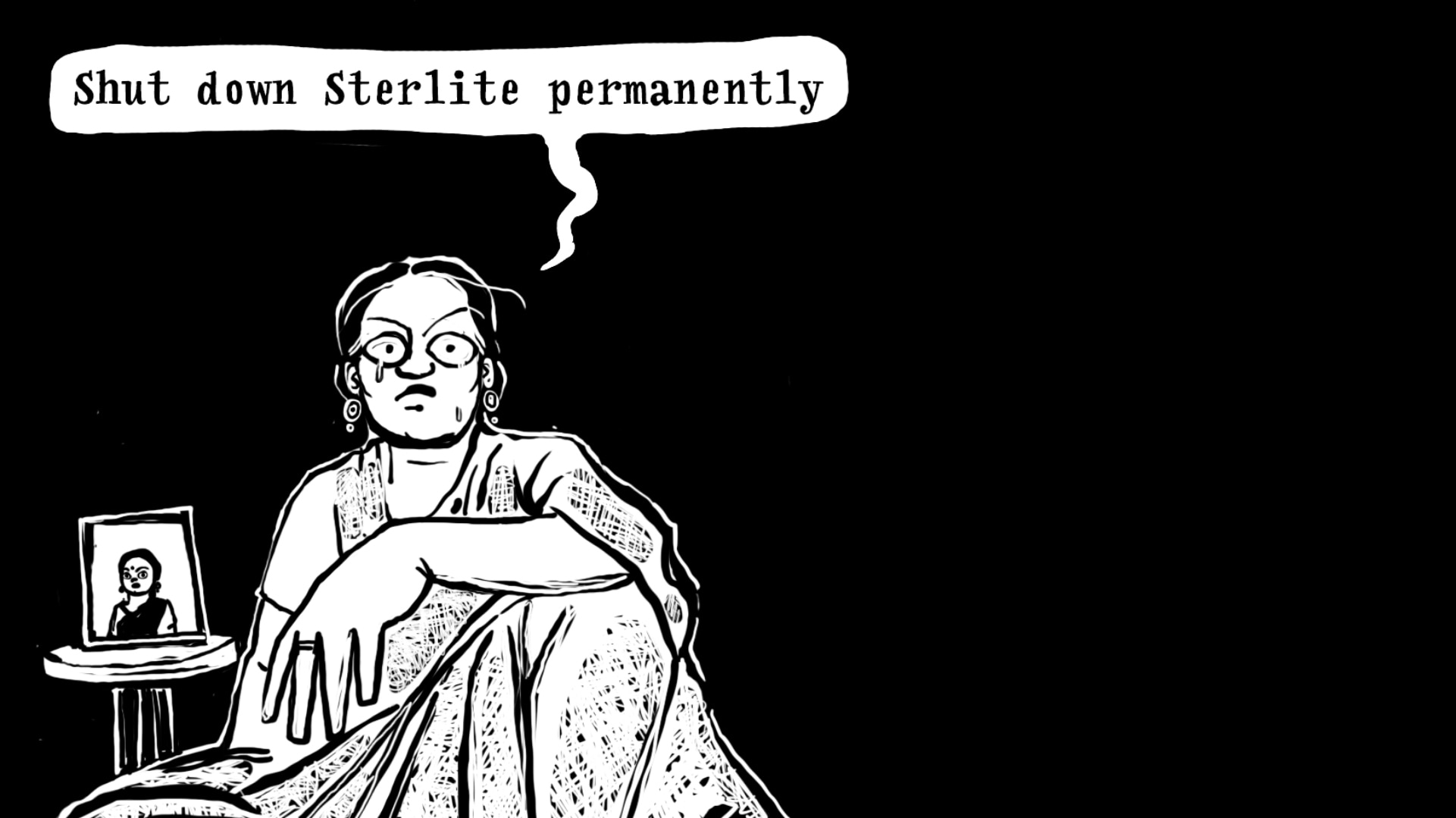 The anti-Sterlite protest of 22 May: A day of rage and death in Thoothukudi

They had been protesting continuously for close to three months. And to mark the 100th day, the struggle committee, comprised of representatives from each locality of Thoothukudi, decided to organise a mass rally to the District Collector’s office on 22 May. They had pulled together several meetings as part of this protest against Sterlite Industries and, as before, they submitted a letter to local authorities stating their intent to agitate. The march would begin at Matha Kovil as it was accessible to everyone in the town. They would assemble early in the morning and walk to the District Collector’s office to submit a petition to the officer.

These are their stories of 22 May, the day they marched 6 kilometres from Matha Kovil to the Collector’s office. Infanta is an Economics graduate from Fathima Nagar. She quit her job in January to take part in the struggle, and has been doing this full time since. She was one of the first to begin mobilising people for this march. She called her friends and all of them began to exchange messages on the WhatsApp groups they were part of.

Tamilarasan has been part of the agitation against Sterlite Industries since 1996. He is a well-known leader, known for the passion with which he defends the Tamil cause. His struggle assumed a personal urgency when his brother died of cancer, a disease that locals have long held is caused by Sterlite’s polluting ways. For the 100th day march, Tamilarasan took on the task of distributing posters. He directed his friends to do the same.

Raja runs a mechanic shop next to the Collector’s office. He hadn’t participated in the protests before, but he decided to take the day off on 22 May to attend the rally. He wanted to shoot everything on his mobile phone.

Rani is a transwoman who had played an important part in the struggle along with her community, in spite of facing struggles of survival everyday. She instructed others from the community to be ready for 22 May.

Vanitha lives in Mini Sahaya Puram. As soon as she heard about the rally being organised, she told other mothers like herself in the area that all of them should participate in the rally in huge numbers. She would herself take at least five people from her family. Her daughter, Snowlin, had just finished her Class 12 exams and was very enthusiastic about taking part in the rally. She began to practice slogans and excitedly discussed the rally with friends in the area.

While everybody was in the midst of organising the march, the police denied the protestors permission to rally and imposed Section 144 as a deterrent. The struggle committee tried reasoning with the police, but to no avail. The committee representatives took this back to each of the neighborhoods they represented. It was decided unanimously that they would go ahead with the rally. On the morning of 22 May, at 6 am, people began to assemble at Matha Kovil. Vanitha took along Snowlin, her daughter-in-law Marylda, and her grandchildren, one six months old and the other two years old. They reached the temple at around 7 am. They met Infanta who was there with her friend Finolin. They thought it best to hold hands throughout, considering the crowd would grow to a large number. As protestors gathered, it was decided that the transwomen would lead the rally, followed by the women and then the men. As there were many elderly protestors and children, everybody was instructed to march at a slow pace. They set off from Matha Kovil at 8 am. The police had installed the first barricade next to Thoothukudi’s fire service station and when the march reached this fortification, the crowd was told to disperse immediately. The marchers refused. An argument broke out. Several protestors asked the police why they were siding with Sterlite and imposing prohibitory orders against them, even after being informed about the rally a week in advance. The police, seeing that the people were unrelenting, launched a lathi charge. Enraged, the crowd surged forward, pushing the police aside. They broke the barricade and marched on. There were similar barricades along the route, and the marchers broke through them all. They pushed their way to VVD Signal, where stones were hurled at them. One of these stones struck Infanta on the head, felling her. She picked herself up and carried on. 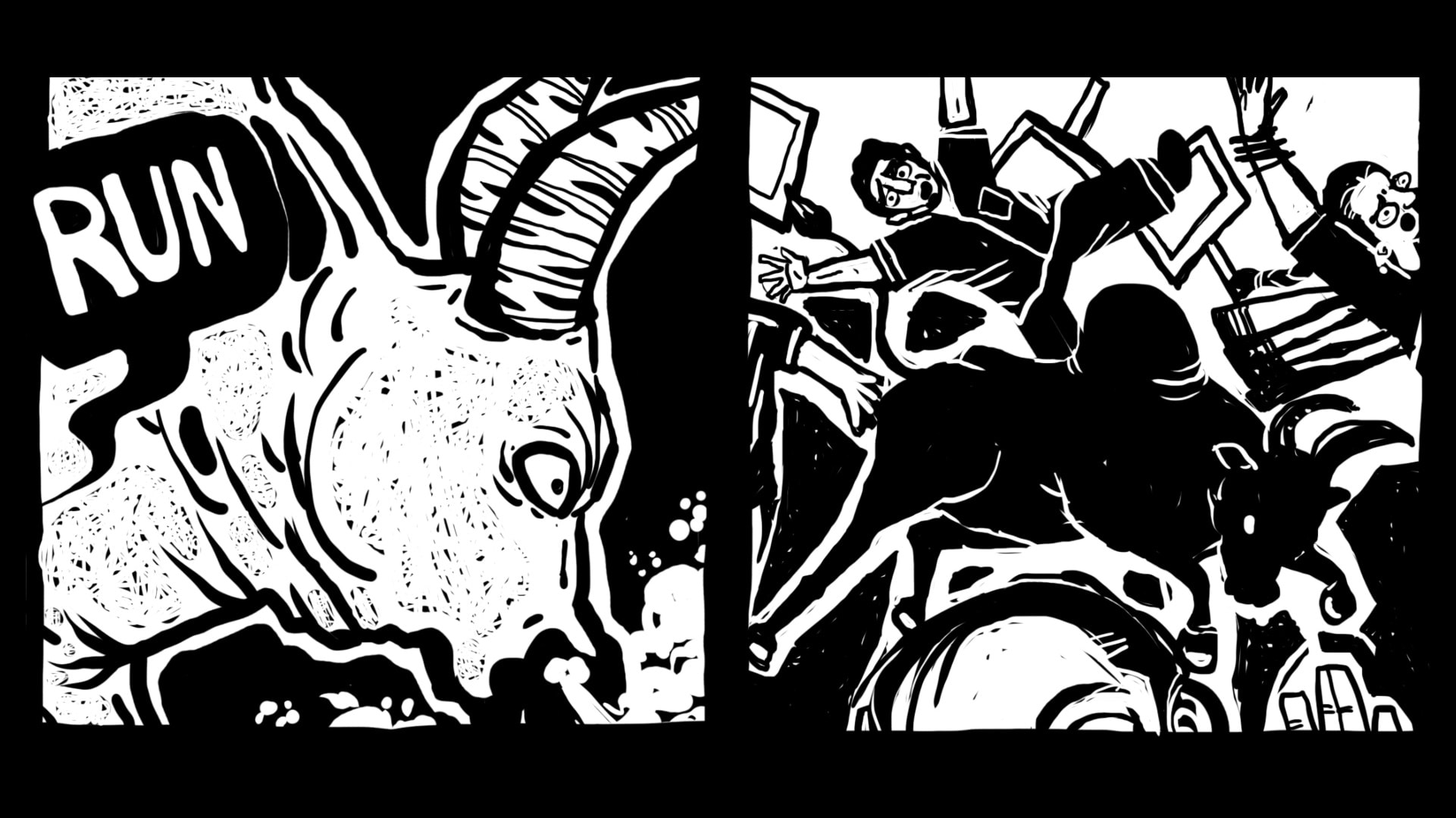 A stray bull stood at the signal. It charged at the crowd, piercing their ranks, scattering people. The police ordered another lathi assault, angering the protestors further; it was just a few weeks ago that thousands of them had gathered at this signal to rail against Sterlite. The police had offered them protection. It defied reason that they were being attacked now. Many from the crowd retaliated. A few snatched lathis from the police and chased them away. Others picked up the stones which were hurled at them and hurled them back. By the time this skirmish between the police and protestors heaved its way to 3rd Mile Bridge, the marchers appeared to have gained some control. The police was chased away.

As Vanitha and others began the final leg of the rally, they spotted smoke from under the Thoothukudi Bypass Bridge. A bike had been set on fire. They walked past it and reached the entrance to the Collector’s office. Police forces had run ahead of them, further away from the building. 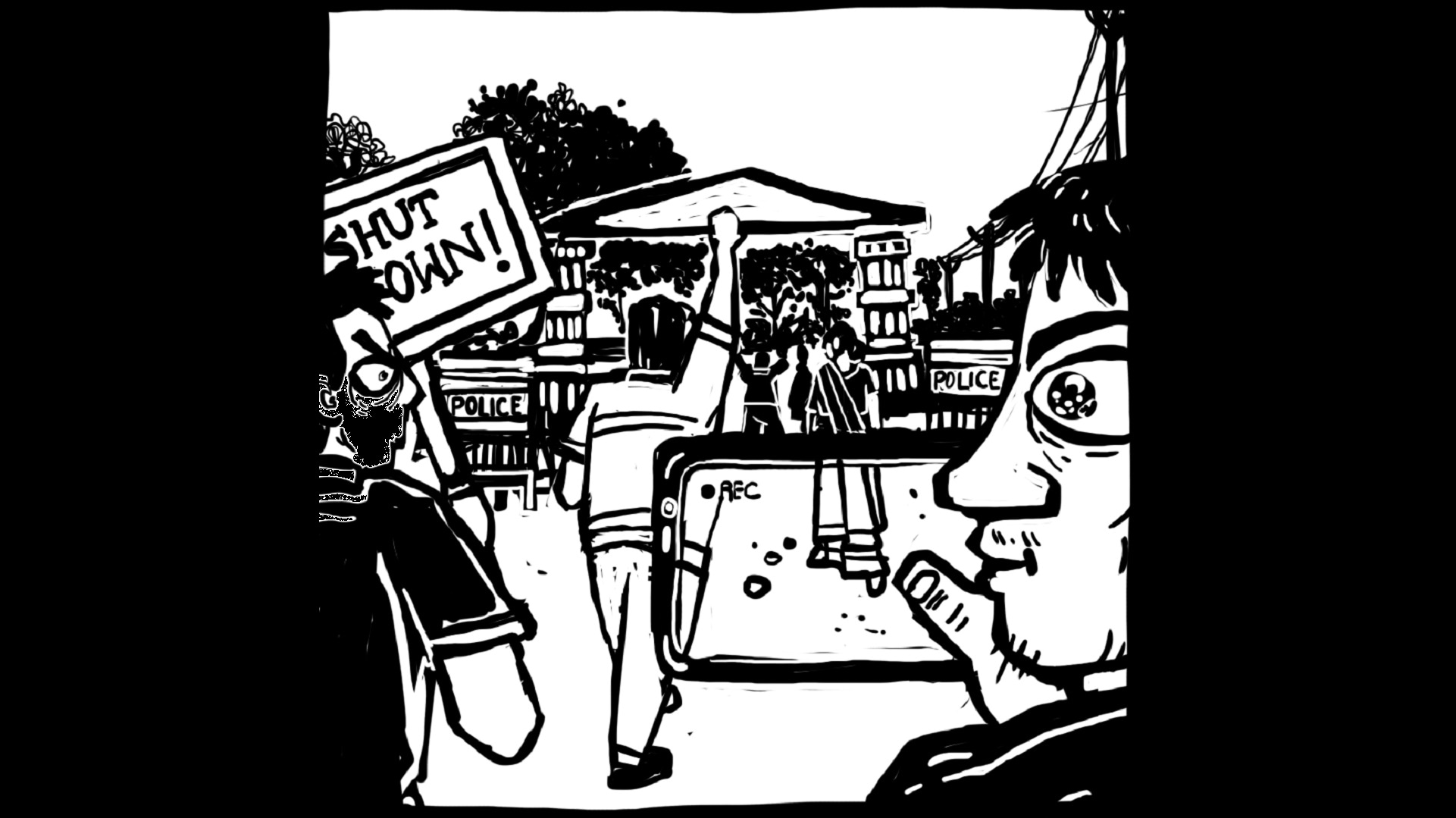 A group of marchers, including Rani and Tamilarasan, walked past barricades and entered the office. Infanta felt faint from the injury to her head. She sat down next to the archway that led to the building. She told Snowlin and the others to go on. Vanitha, who said she was tired carrying her grandchild, sat down with Infanta. As protestors approached the office, the police struck them with blows. This didn’t deter Rani, who thought they had the police outnumbered. She was sure they’d get to meet the Collector. But when she got to the building, Rani found the police had them surrounded. Hundreds of uniformed men had positioned themselves around the office. She heard gunshots behind her. Rani grabbed her sisters and ran. Raja was dumbstruck. He’d expected to film some action and skirmishing on his mobile phone but he hadn’t quite expected to see gunfire. As he looked around, he saw a man in a yellow t-shirt taking aim at him. Moments later, an older protestor next to Raja collapsed, blood flowing from his head. As Raja ran forward to help, he felt a rush of pain in his leg. He looked down to see that he had been shot. Infanta, who was at the archway, stood up in shock as she heard the shots. She told Vanitha to leave with the children. As people bolted away from the building, Infanta ran towards it, looking for Snowlin, Finolin and Marylda. She caught sight of them almost instantly. The four clutched hands and headed for the gate. 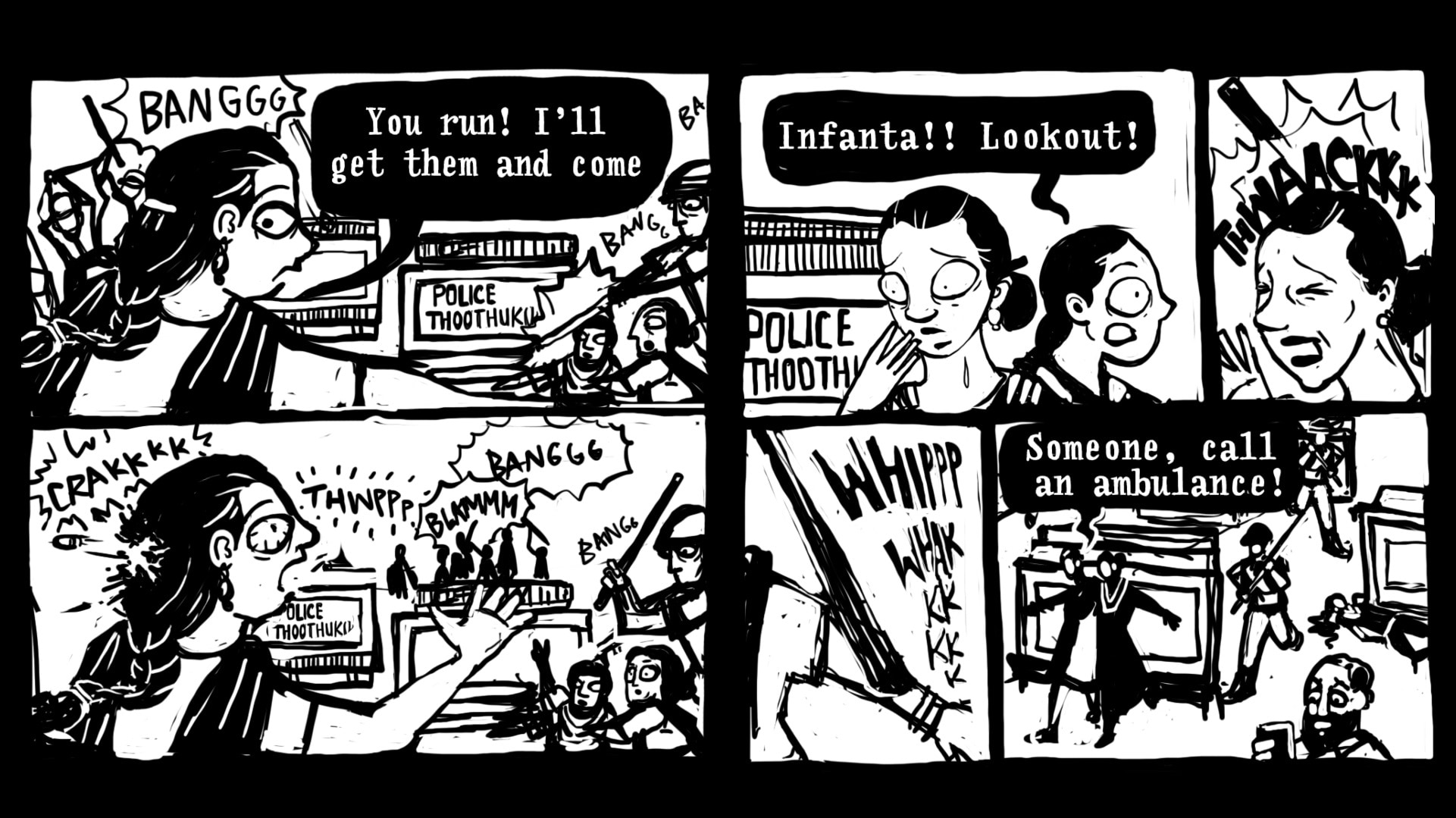 As they neared the barricade at the entrance, a policeman struck Finolin on the head with a lathi. She collapsed. Infanta let go of Snowlin’s hand to help her friend. Snowlin, who was a few paces ahead told Marylda to run and turned around. She bent to pull Finolin up. A bullet hit Snowlin’s face. Infanta watched her drop to the ground, her face masked with blood. Around her the police waved lathis and the bullets continued to fly. She had to help Snowlin, she had to get her to an ambulance. 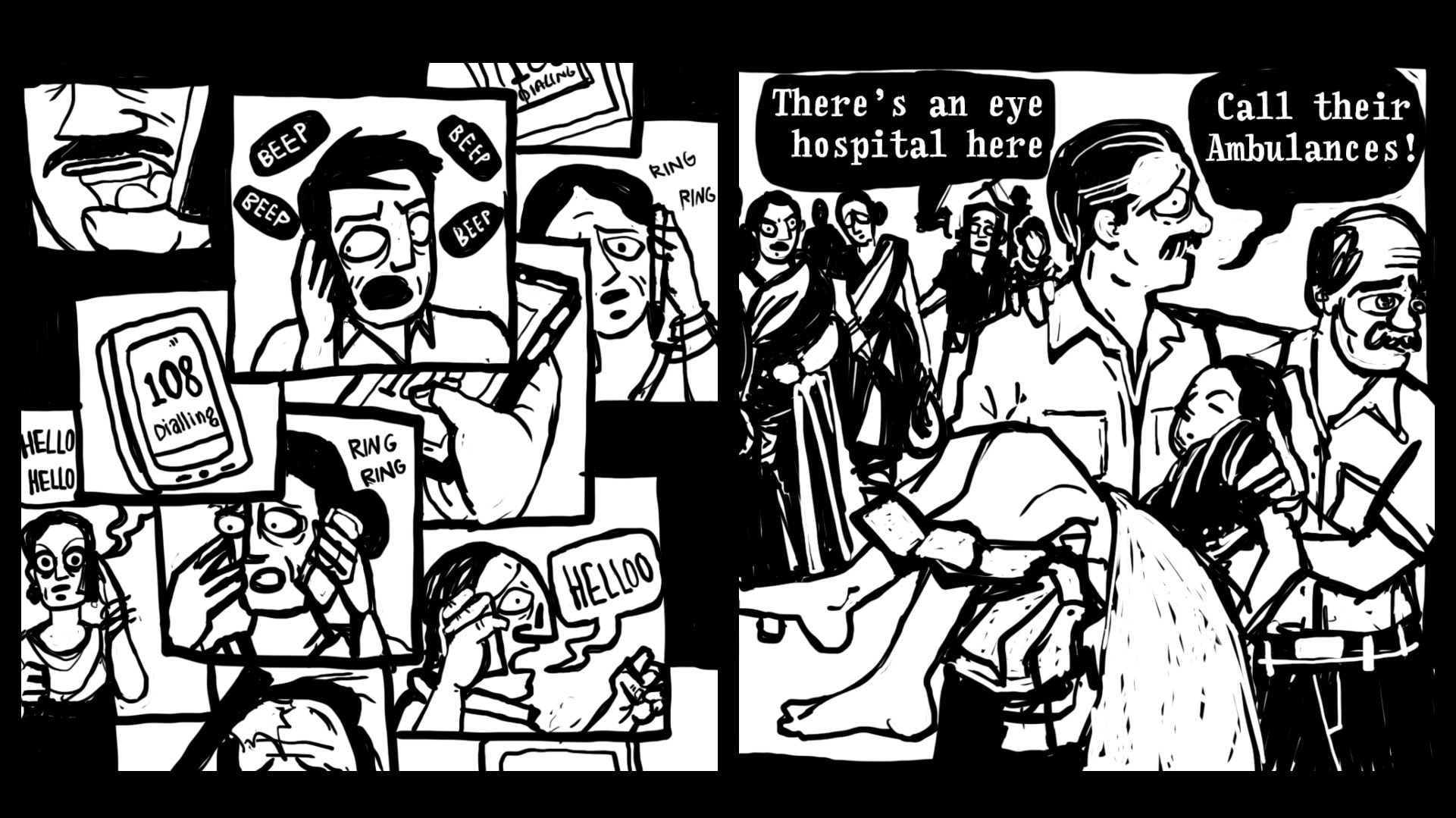 More people collapsed under firing. A few protestors rang 108 to call for ambulances so the injured could be taken to the government hospital. No one came. They commandeered motorbikes and scooters to carry those who were wounded. A privately run eye hospital was called, and it dispatched two ambulances. These vehicles made multiple trips to transport injured protestors. As many fought for their lives at the Government Hospital, Vanitha reached home. Everyone who had left with her was safe, except Snowlin. Vanitha began to make a series of calls to check if her daughter was out of danger. Meanwhile, there was no word about Tamilarasan’s whereabouts. His family made inquiries with friends. Vanitha was told Snowlin was dead. Tamilarasan hadn’t made it either. They were killed in the firing. Snowlin and Tamilarasan were among the 13 people who died in Thoothukudi on 22 May. Their families released a statement declaring they wouldn’t claim the bodies of the dead till Sterlite shut down permanently.

This article is based on conversations with eyewitnesses in Thoothukudi. Some names have been changed on request.