At a time when Pakistan is in desperate need to conserve water, the Chotiari reservoir — a mega water storing body constructed 17 years ago to boost agriculture in the country’s southern riparian Sindh province — has emerged as an unsustainable irrigation project and an environmental disaster due to bad planning, a new report revealed.

A fresh study jointly done by Pakistan and the United States has said that the conversion of the Chotiari wetlands into a reservoir has ultimately turned into a disaster due to the resultant water logging, soil salinity and negative vegetation in the adjacent areas of the structure.

The study was done by the American Society of Civil Engineers (ASCE) with the collaboration of experts from Pakistan’s Mehran University of Engineering and Technology in Jamshoro as well as the University of Nevada.

Titled Environmental Impact of Conversion of Natural Wetland into Reservoir: A Case Study of Chotiari Reservoir in Pakistan, the document, which contains data till 2017, was published online in May this year. It used remote sensing and geospatial tools to quantify the salt-affected and waterlogged areas within a five kilometre buffer area of the reservoir.

The Chotiari reservoir is situated on the edge of Pakistan’s Achhro Thar (white desert) in southern Sindh’s Sanghar district that borders India. Multiple communities benefit from, and are dependent on, wetlands. All photos by Zulfiqar Kunbhar.

Historically, the Chotiari was a complex of deep lakes and riverine Makhi forests with a rich ecosystem.

In 2009, some wildlife conservation organisations suggested that this site should be submitted for consideration as a Ramsar site, however that did not happen. The Ramsar Convention on Wetlands is an international treaty for the conservation and sustainable use of wetlands.

An initiative of the Water and Power Development Authority (WAPDA), the conversion of the Chotiari wetland into a man-made water reservoir was done through raising the elevation of levees on its eastern and western sides. The project was approved in 1992 and started in 1994. It was to be completed in three years, by December 1997, at a cost of PKR 1.5 billion (USD 9.68 million), the Left Bank Outfall Drain (LBOD) being recognised as feeder canal of the dam. However, due to ineffective planning and alleged corruption, the project was completed in December 2002, at a total cost of PKR 6 billion (USD 39 million).

The main purpose of the reservoir construction was to store water during the monsoon period and supply it mainly for Rabi crops (winter crops) in Sindh’s Sanghar and Umerkot districts. As per design, the Chotiari Reservoir is constructed to irrigate 290,000 acres of barren land in areas in Sanghar’s Khipro and its neighbouring district Umerkot.

Today, the Chotiari reservoir is an off-canal storage reservoir which is fed through the Ranto Canal, a tributary of the Nara canal.

With a maximum storage capacity of 0.71 million acre feet (MAF) of water, the Chotiari reservoir was made to store excessive rain water in the River Indus. However, since its construction, it has received the full supply level only three times. In 2010 it was filled for the first time due to a devastating countrywide super flood. In the following two years, it was filled due to torrential rains.

“To fill the dam, it needs 6,500 cusecs or 70 days. Generally, however, excessive water is not available for 70 days in the River Indus,” said Haji Khan Jamali, the former director of the Nara Canal. 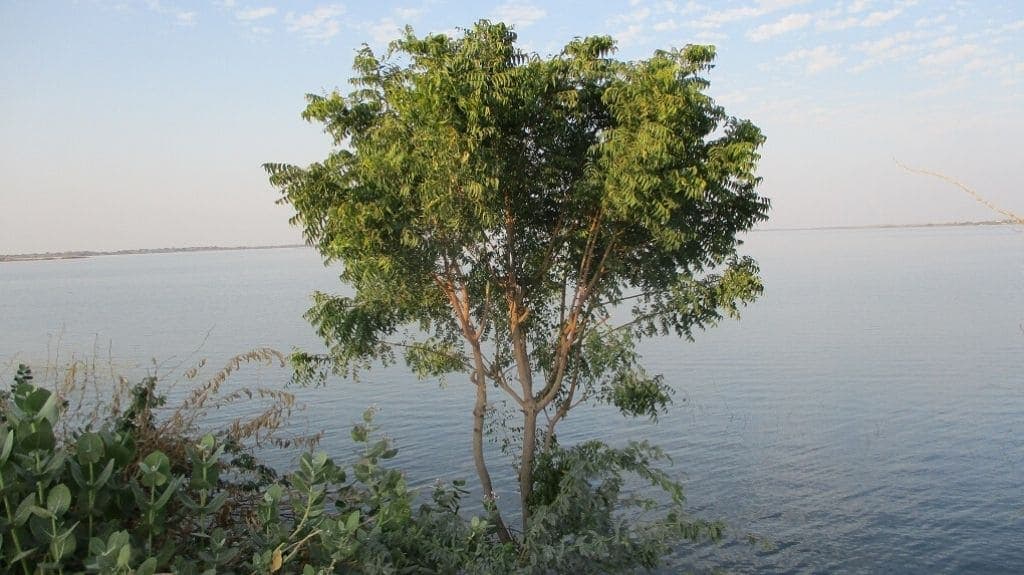 The area around the reservoir is now suffering from waterlogging and is salt affected.

For instance, it discloses that since the completion of construction of the reservoir in 2002, water-logging has increased by 7.5 percent. In the same time period, 4.5 percent of the fertile agricultural land changed into “unproductive salt-affected soil”.

The study also reveals that natural vegetation decreased up to 9 percent within the lake boundaries due to the conversion of natural wetland into a reservoir.

The transformation of natural wetlands into a man-made water reservoir has not only degraded the natural environment of the wetlands but has resulted in water-logging and salinity in the adjacent area of the project.

Due to the seepage of the Chotiari Reservoir, a vast area of Sanghar’s cotton producing agricultural land has been damaged. Cotton is among Pakistan’s top export commodities. Sanghar, which was said to be the number one cotton producing district in the country eight years ago, is today not even in the top 10.

Malik Sher Muhammad, president of the Federation of Sanghar Chambers of Commerce, said “Not only cotton, Sanghar was once the leading wheat producing district, but due to water-logging the production has declined sharply." The area, and its waterways, have been immensely fertile.

During the construction there was a mass movement by locals who questioned the project's potential and predicted future environmental hazards.

Moula Bux Mallah, a local environmental activist who represented the Citizens Action Committee — a movement to safeguard the environmental interests of the area — said the project has devastated environment and livelihood.

“During the construction of the Chotiari Reservoir, an environmental assessment survey was conducted jointly by government officials, contractors and locals to control seepage and safeguard the environmental interests of the area,” he said. “To control seepage, there was an agreement to establish three sim nullahs (drainage canals) and install scavenger tube wells. The formation of a national park was agreed on. But the ground reality is that none of the agreed points were implemented in true spirit,” said Mallah.

Haji Khan Jamali, while acknowledging Mallah’s statement, said that there are around 100 shallow tube wells installed to control seepage but they are non-functional due to the non-availability of electricity. For the same reason, work on sim nullahs did not begin.

Mallah said that the reservoir was constructed to cultivate barren land in its command area, but that it was destroying once agriculture-rich fields. “Till now, an equal size of agricultural land has been turned into unproductive soil. And this loss is increasing with every passing day,” he added.

Mallah also said there is loss of weeds in the reservoir which is leading to a sharp decrease in fish production. 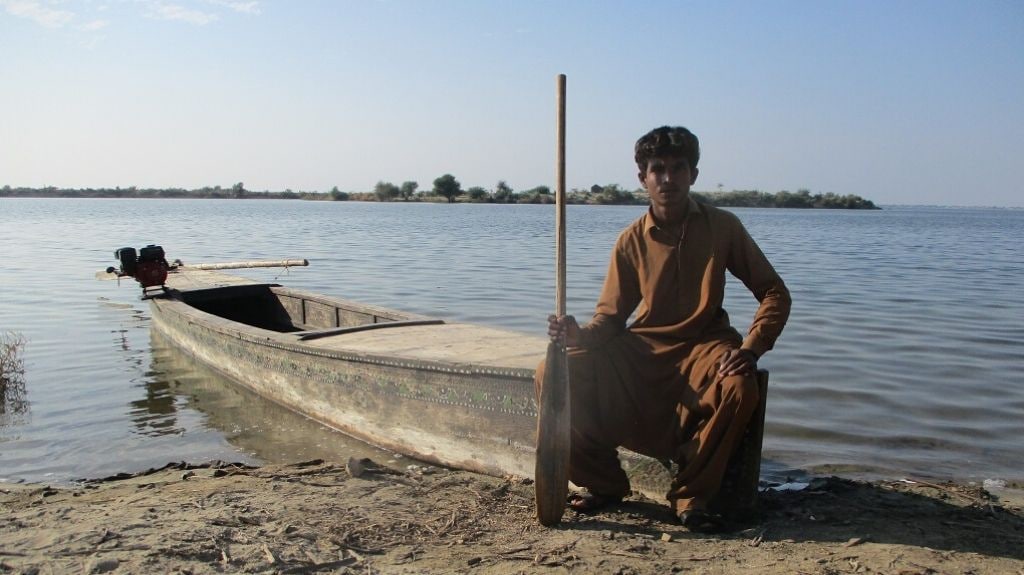 Those most affected have not really had their voices heard.

“There are around 1,000 boats in the area. The families whose livelihood is attached to these boats have been affected,” he said.

According to him, the riverine Makhi forest has vanished as trees have submerged into the reservoir. “The Chotiari wetlands and forest were once known for partridge, rabbit, endangered Barasingha (swamp deer) and Chinkara deer. Now, the overall natural beauty of the lake has vanished,” Mallah stated.

Altaf Ali Siyal, one of the authors of the study and a senior faculty member at the US-Pakistan Center for Advanced Studies in Water (USPCAS-W) at Mehran University of Engineering and Technology in Jamshoro also thinks that there are high chances the environmental devastation level in the surrounding areas of the Chotiari Reservoir may increase beyond what is mentioned in the study.

“We selected a five kilometres area on some estimates. But there is a strong possibility that the devastation level may have a greater than just a five kilometre radius,” said Siyal.

He stressed on the need for a proper mechanism of installation of scavenger tube wells to counter water-logging.

According to the design, the Chotiari Reservoir feeds the Thar Desert in the Umerkot district through the Nara Canal and its tributaries stretching up to more than 100 kilometres away from the reservoir.

Umerkot is Sindh’s southernmost riparian district. Besides other cereal crops, the area was once known for abundance in chili crop and still holds one of Asia’s largest chili markets at Kunri. However, during the last few decades, the area has faced acute agriculture and drinking water shortage. The water shortage in this area has resulted in the highest number of water-related protests in the country.

With the commencement of the reservoir water supply, deep desert parts of Umerkot which mostly consist of sand dunes saw an improved supply.

However, in recent years local farmers have raised questions about water quality, which according to them has shown increased salinity and is affecting their agriculture yields.

“Before construction of Chotiari Reservoir, we used to get Indus River water direct from Nara Canal. Then, on average we used to produce 70 maunds (traditional weight measurement, one maund is approximately 37 kilogrammes) of cotton per acre. After the reservoir construction, the crop yield started lowering so much that now we hardly produce 20 maunds of crop per acre,” said Janib Ali Dalwani, a small grower in Umerkot taluka whose lands are fed through Chotiari Reservoir water.

Janib says due to the reservoir, water availability has increased to the tail end areas. However, the quality is unfit for crop cultivation. “Paani me jaan nahay (this water is lifeless),” he said.

According to growers in the area, since the Chotiari Reservoir area comes on the edge of the Achro Thar Desert which is basically a salt range, chances are high that stored water in the reservoir contains salt which are damaging the agriculture fields in its command area of Umerkot. Siyal, who is also an agricultural engineer, suggested a scientific assessment of the situation.

“Through some laboratory tests, reservoir water supply was found sediment-deficient, which affects the fertility of the crop. This situation further worsens in the winter as water supplied to Chotiari Dam via River Indus comes from stored water in the Tarbela Dam, located in the upstream Khyber Pakhtunkhwa province, some 770 miles away from the Chotiari Reservoir,” he said, adding that it does not necessarily mean the water supply was showing increased salinity or creating water-logging in Umerkot.

“This needs to be properly investigated.”

Banner image: The Chotiari reservoir was meant to ease problems, but has become a source of them. Photo credit: Zulfiqar Kunbhar.