Over the last week, like millions of others, I have been spending every spare hour playing Red Dead Redemption 2 — the newest game from Grand Theft Auto developer Rockstar Games. Unlike its more renowned stable-mate, the world of Red Dead Redemption 2 is far more serious. (In fact it can often be a bit of a downer, if I’m honest.)

But being more serious doesn’t preclude the game from having its share of intricate details, biting satire, and even a bit of nuanced commentary. We're taking a look at the philosophy and key themes that have shaped the reimagined western setting of Red Dead Redemption 2.

The Death of The West

Set at the dawn of the 20th century, Red Dead Redemption 2 is a prequel to 2010’s Red Dead Redemption. The West just isn’t as Wild as it used to be. Anarchy has given way to federal bureaucracy as growing trade and industry bring increased wealth — and better law enforcement to the region. For outlaw protagonist Arthur Morgan, these are troubling times. The world he knew and his very way of life seem to be inexorably coming to an end.

Of everything that Red Dead Redemption 2 has to say, perhaps this is the most poignant. All things end. You can resist, or deny. Maybe even slow down the process. But eventually, everything and everyone you know or care about will be taken from you.

Just as the march of time brought civilisation to the West and with it, an end to the libertarian lifestyle of its early settlers, so too will time bring an end to all things. Friendships will fade, brotherhoods will break and families will fall apart.

(Above: Even the Wild West isn’t immune to the wonders of the industrial revolution | Source: Rockstar Games)

This sobering ethos marks much of the story of Red Dead Redemption 2. Interactions with other characters almost inevitably bring up members of the gang that are no longer with us: picked off over the years or lost just prior to the start of the game during a heist gone wrong in the town of Black Water. The Van Der Linde gang is in steep decline and among the gang’s more sharp-witted members, the writing on the wall is becoming increasingly clear — their days are numbered.

But rather than call it a day, the gang, chooses to keep faith with their leader who — while now primarily concerned with just getting his people out of harm’s way — once shared with them a grand vision of a better way of life.

While Arthur Morgan may be the protagonist of Red Dead Redemption 2, it would be hard for anyone to refute that the true star of the game is his boss: the notorious Dutch Van Der Linde, ringleader of the eponymous Van Der Linde Gang.

Intelligent and manipulative, charismatic and cruel, magnanimous and merciless, Dutch is all of these things, frequently at the same time. Naturally, he does not see himself as an opportunistic brigand, but as a crusader, fighting to preserve a way of life that is now under threat.

Dutch is the prime embodiment of libertarian existentialism: he’s against big government, a fervent believer in the paramount importance of individual freedoms, who fears that ‘civilisation’ — at least the kind that the US Federal Government espouses — comes at the cost of true freedom itself.

In his own words, Dutch describes himself and his followers as “…dreamers, trying to reform the world into a better, truer, kinder society”. For Dutch, the idea of the noble homesteader working the land and living free is representative of the very highest virtues of humanity.

(Above: Dutch Van Der Linde — well known for his flair for the dramatic | Source: Rockstar Games)

In many ways, Dutch is the tragic hero of Red Dead Redemption 2: an idealistic leader who is too intelligent to not realise that the walls are closing in, but far too proud to admit defeat. Dutch has always firmly believed that the end justifies the means, although lately, it’s increasingly difficult to determine what Dutch’s true ends are.

As it becomes clear to Mr Van Der Linde that his designs of a ‘Savage Utopia’ will never see the light of day, both his behaviour and plans become more erratic, violent and desperate. In the end, defeat comes not in the expected form of a well-aimed bullet, but in giving in to despair, as Dutch allows himself to become the very villain his detractors believe him to be.

But even though Dutch and his gang are focused firmly on corporeal matters, there is also a transcendental aspect to Red Dead Redemption 2 to consider, specifically…

The Deer and The Wolf

While organised religion is frequently mocked and parodied in many of Rockstar’s games, faith and spirituality are nevertheless a common theme in both Red Dead Redemption 1 and 2. While you don’t encounter The Stranger (the bullet-proof, stovepipe hat wearing, God/Devil metaphor) from the first game (or at least I haven’t yet), as the story progresses, Arthur will begin to have a series of recurring visions. These visions are linked to the game’s honour system and are representative of how you have played through the game.

If you choose to play the part of a noble outlaw and conduct yourself in a mostly honourable manner, Arthur will have visions of a large stag set against sun-drenched grassland. In Christianity, the Stag is sometimes used to depict piety and as a symbol of God’s protection. Native Americans also regard the deer as the protector of the forest and revere it for its intuition, sensitivity and gentleness. This would make sense since when played honourably… at least as much as a ruthless, gun-slinging outlaw can ever be considered honourable, Arthur does tend to spare the innocent and protect the helpless from tyranny and evil.

However, if you’re like me and instead choose to embrace the lifestyle of a dastardly, dishonourable desperado, you will instead be treated to visions of a Wolf set amongst a more grey and dour landscape. As a despicable bandit, preying on the weak and always on the lookout for new and exciting ways to victimise your fellow man, you are a living embodiment of the Latin proverb ‘Homo homini lupus est’ which literally translates to ‘Man is a Wolf to Man’.

(Above: I Regret Nothing! | Source: Red Dead Redemption 2)

While wolves are associated with positive traits across some cultures (most notably loyalty and intelligence), in Christianity, they are used primarily as a symbol of greed. These cunning and vicious predators are the bane of The Shepherd (Jesus); a dire and ever-present threat to his flock.

In the Book of Genesis, Jacob’s youngest son is described in the following manner: "Benjamin is a ravenous wolf; in the morning he devours the prey, in the evening he divides the plunder." That description certainly would fit my dishonourable Arthur as he splits the proceeds of his villainy with the rest of the gang.

Curiously, however you choose to play, Arthur and the Van Der Linde gang believe themselves to be morally superior to the average cut-throat. That little self-delusion certainly begs the question…

Is There Truly Honour Among Thieves?

While Rockstar may have you believe so with the trouble they took to implement an honour system, the truth — probably by design — is much murkier. Any questions of honour or dishonour in Red Dead Redemption are perhaps based entirely upon our own character’s subjective morality and how they judge their own behaviour.

For those who prefer learning critical life skills instead of studying philosophy, here’s the short version. 'Subjective morality' requires only that a claim of superior morality be backed by belief rather than truth. This is opposed to 'objective morality', where moral correctness is determined by universal truth or a higher power with ‘superior morality’ such as God. While there is also an argument to be made for 'intrinsic morality' — that all humans hold an innate and almost universal understanding of right and wrong — let's ignore that for now and focus on just the first one.

Subjective morality is used extensively by the core cast of Red Dead Redemption 2 to validate their actions as being virtuous or justified, constantly battling self-awareness with ever larger helpings of self-denial. Occasionally you get the opportunity to see just how far it goes. For example, on more than one occasion during the game, our protagonist drops a variation of this line:

“The world is changing, they don’t want folk like us no more. No more outlaws or killers. Now we’re the ones being hunted.” 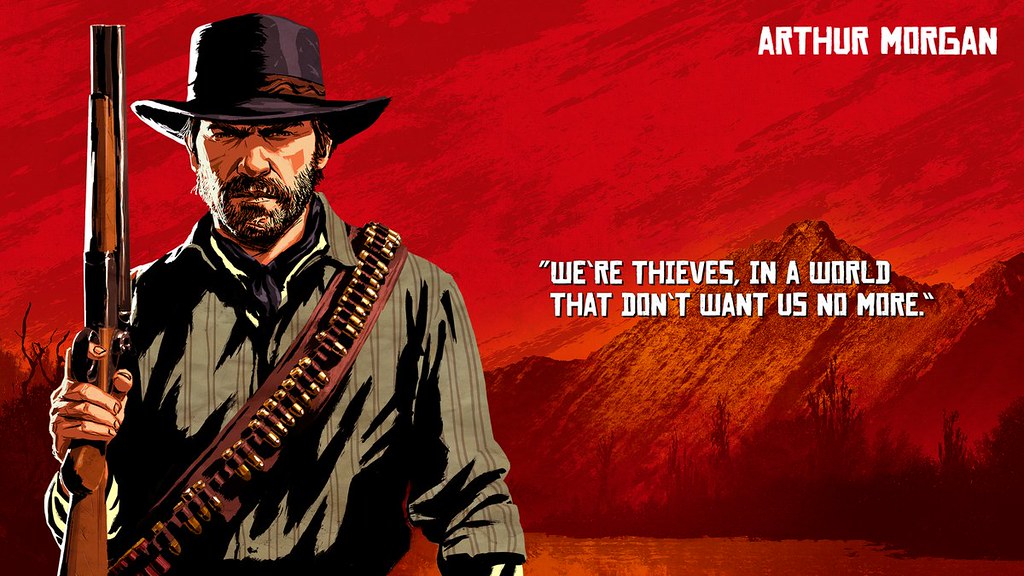 (Above: Click through for character posters. Images courtesy Twitter/@RockstarGames)

Now either I have no understanding about the silent majority’s demand for outlaws and killers back in the Old West, or this statement is idiotic to the point of absurdity. It’s possible that what Arthur was referring to was that back in the day, the gang was known to have primarily targeted other outlaws, essentially stealing for themselves what others had stolen first.

Even when they did hit more innocuous targets, they kept the body count low and, in keeping with the modern-day Robin Hood vibe that Dutch is eager to project, gave some of their ill-gotten gains to the poor.

However, by the time Arthur reiterates this statement, I had robbed an oil magnate, a trainload of wealthy holidaymakers heading East, two ranchers, an oil refinery and the 1899 equivalent of an armoured car. And if you’re thinking back to the mention I made about playing a dishonourable character, these are non-optional missions, so no matter how much of a white knight you want to be, there’s no avoiding them if you want to finish the game.

So what separates Dutch’s gang from the other key bandit outfit, Colm O’Driscoll’s boys? These days, not a thing. In fact, the game takes pains to make that clear right at the outset when former O’ Driscoll gang member Kieran states how similar they are, and is genuinely surprised when Arthur denies the comparison.

(Above: It’s okay for us to rob you because unlike other bandits, we fully believe in what you represent! | Source: Rockstar Games)

This reaction is understandable of course — we are never the villain of our own story. Only Hosea, one of the original members of Dutch’s gang and easily its most sensitive and introspective, is able to openly confront the truth… that they have lost their way and are now “just another bunch of killers”.

As you’d expect, one of the primary dangers of subjective morality is that both sides can employ it in equal measure to justify any action they deem necessary. Let that situation play out for long enough and you run the risk of finding yourself in….

An unending cycle of vengeance

I can’t really talk about this final point much without major spoilers for both Red Dead Redemption games, so I’ll keep this one brief.

Right from the start, revenge is an important theme of both games; fuelling everything from the start of the O’ Driscoll-Van Der Linde feud which leads to at least three generations of violence and reprisals, to the bad blood between various families and factions out in the open world.

Call it poetic justice or call it fate, but Red Dead Redemption 2 takes multiple opportunities to remind you that those who choose to live by the sword, run a good chance of dying by the sword.

Like I said in the beginning, this game can be a bit of a downer. But being a downer doesn’t stop it from being brilliant.

Now if you’ll excuse me, I have a train to rob.