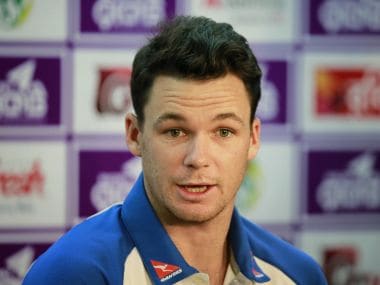 Peter Handscomb 'hurting' after axe from Australia's squad to play Pakistan next month, says he needs to score more runs

Sydney: Test discard Peter Handscomb says he is hurting after being axed from Australia's squad to play Pakistan next month, but has heeded the message that he must score more runs.

The middle-order batsman was sacrificed after form deserted him, with selectors opting instead for uncapped pair Travis Head and Marnus Labuschagne.

Since making his Test debut against South Africa in late 2016, Handscomb has averaged a creditable 43.63.

But the 27-year-old paid the price for being dismissed in single figures nine times from his last 11 innings across all formats.

"It's obviously tough, getting dropped at any stage hurts," he told cricket.com.au on Tuesday.

"I was backing myself to score runs in the subcontinent. I had a tough tour (this month) with Australia A in India, but I know I can do it and I've done it before both in India and Bangladesh."

Despite his self-belief, the sometime wicket-keeper understands why he has been dropped.

"It's the same old – you've got make runs to be playing for Australia and I haven't been putting numbers on the board that's needed to represent this country," he said.

Australia has selected five debutants for the two-Test series in the United Arab Emirates, with Michael Neser, Brendan Doggett and Aaron Finch joining Labuschagne and Head.

Veteran fast bowler Peter Siddle, 33, was also recalled after a near two-year hiatus, a decision that stunned ex-Australian quick Stuart Clark who said Victoria's Chris Tremain should have got the nod instead.

"I spat my cornflakes out when I read it," he told reporters.

"I've read we have gone with character over ability and all this stuff. Well, what's wrong with Tremain's character? He seems fine to me."

The first Test is in Dubai from 7 October with the second in Abu Dhabi from 16 October.