On the India-Bhutan border, an indigenous group faces extinction due to mining pollution

"The days are not far when we will be confined to the pages of history if the wanton destruction of nature continues in the name of livelihood,” says Reshma Toto. The 22-year-old is a resident of Totopara on the India-Bhutan border and a member of an indigenous group that has only 1,630 people left in the world.

Most of those people live in Totopara, a village in Alipurduar district of West Bengal. It lies on the fringes of Jaldapara National Park – a protected forest known for its population of tigers and gaur (or Indian bison), in an ecosystem typical of the Himalayan foothills known as the Terai.

Above: The demographics of Totopara, as of 2011.

On the outskirts of the village is one of many India-Bhutan border checkpoints. Just beyond this, on the Bhutan side, is a stone-crushing operation: the main source of the Totos’ problems.

“The mining in Bhutan has been making life difficult for us but no one seems to be bothered,” says Reshma. “The natural streams that once remained full of water have died. We have to depend on a lone active stream inside the forest for our daily water needs. But it also fails to fulfil our requirements during the extreme summers.” “The Totos have been living in Totopara for the past several centuries and worship nature. But the fast depletion of natural resources due to quartzite stone mining in the nearby Bhutan hills, coupled with the massive destruction of forests, has put their existence in danger,” says Samar Kumar Biswas, professor in the department of anthropology at the University of North Bengal.

Biswas, who has studied the Toto people extensively, adds: “The influx of outsiders, mostly Nepalese and people from Bihar and other eastern states, began in the 1940s [and] affected the habitat. The Totos were living in a completely pristine environment before that.”

Just across the border are the hills of Tading in Bhutan, an area that has been mined since 1987. First, the hills were quarried for dolomite, a stone that is crushed and used in construction. Then limestone – another construction material – was found and quarried. Now the operations include high-value quartzite, a decorative stone in demand to cover walls, floors or as roof tiles.

Next to the quarries are the stone crushers that can be seen from Totopara. When they are working, the entire area is covered by a layer of dust. Both quarrying and stone crushing need large quantities of water, which the miners and crusher operators take from the watercourses upstream of the village.

Above: Anju Toto runs the only guest house in Totopara.

Anju Toto, 47, who runs the only guest house in Totopara, says: “Earlier, numerous small streams in the village had water throughout the year. But now they have all gone dry. Four borewells were dug a few years ago, but just two are functional. They are located far from the main market. We have to often walk for around 3-4 kilometres to fetch water. It often leads to skirmishes among the villagers. But we have no option.

“Only one stream, deep inside the forest, is still active. Even there, the water supply is depleting. We built a reservoir near the stream and connected a water pipe over a kilometre long to bring water to our guest house. During summers, the water reduces significantly, causing problems for our guests.”

Most residents have pipes leading from the forest stream to their homes.

Above: (LEFT) Dried springs in Totopara mean residents must draw water from the lone flowing spring in the nearby forest. | (RIGHT) Many residents have installed pipes from the spring to their homes.

Villagers say that the authorities in Bhutan used to supply water until three years ago. But stones uprooted by the quarrying have blocked streams and no water is being supplied now.

Mining in Totopara leads to soil erosion and deforestation

In some places, stream beds have become wider due to soil erosion, though they are dry except during the monsoon. When it rains, the stream near Totopara rages so close to homes that villagers have had to place boulders in wire meshes to stop the soil from being washed away. 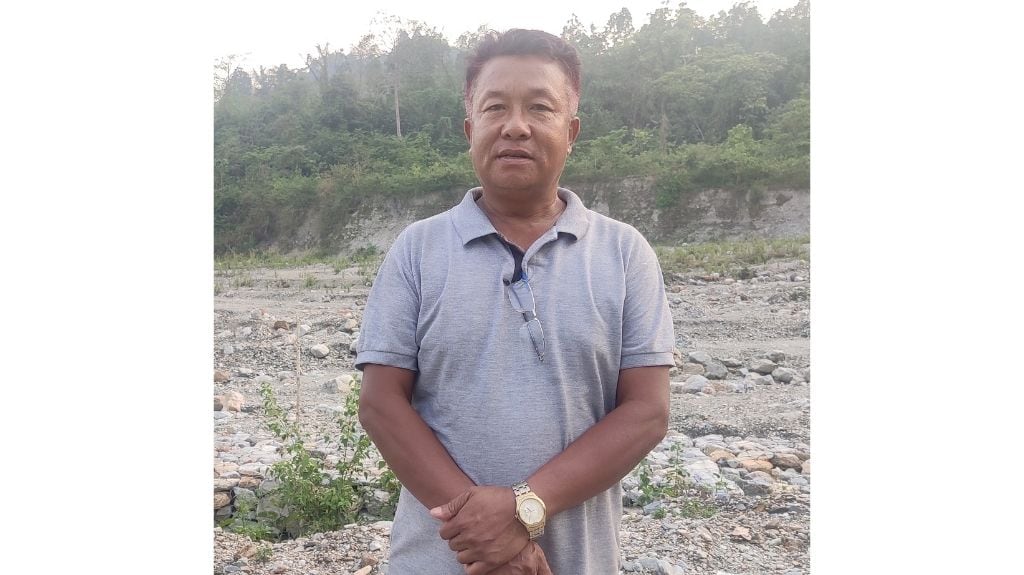 Ashok Toto, 53, points to the stream and says: “It was so small that we used to jump and cross it in our childhood. It used to be at least 45 feet [about 15 metres] from the village. Now it’s just 8 feet away, forcing us to take measures to save ourselves.”

Above: Rocks in wire cages have been used to keep the stream from washing homes away.

Deforestation is a common problem in the area. “The population of those migrating from other states and even Nepal and Bhutan has exceeded the local Toto population,” says Biswas of North Bengal University. “Around 4,000 people are staying in Totopara, of which just 46.24 percent are Totos who have lived here for centuries. People from other areas who began to arrive axed the forests to build houses and sell the wood for survival.”

Biswas adds: “We suspect more than 70 percent of Totopara’s forest cover has been lost in the past four decades. Numerous jackfruit and mango trees that were easily spotted even until 2004 are rarely seen now. Most of them were on private land and were axed for planting betel nut trees by Totos and others. They do not have many other livelihood options. Even animals like wild boar that were seen earlier have dwindled in numbers. The tall trees and dense forests have almost disappeared. The medicinal herbs on which [Toto people] depended for livelihood and treatment are also gone.”

Bakul Toto, 45, has around 450 betel nut trees. “It brings good returns,” she says. “Our betel nuts are in demand because of their sweetness. A single tree fetches around 30 kg of betel nut annually that sells for 50 Indian rupees (US$ 0.68) per kg.” Betel nut is chewed, often packed in betel leaves.

Above: A betel nut plantation in Totopara.

The West Bengal Forest Department has no information on deforestation in Totopara. Bijoy Tamang, range officer of the Jaldapara Wildlife Division, says: “We know the exact forest cover of Jaldapara National Park. But Totopara falls outside its purview and most of the trees that have been axed were on private land, of which we have no record.”

The environment is not the only reason this indigenous group is in danger of extinction. Inbreeding has led to 49% of school-age unmarried Totos suffering from thalassemia, a life-threatening blood disorder, according to a study conducted between 2009 and 2012 by the Kolkata-based Netaji Subhas Chandra Bose Cancer Research Institute.

Nabamita Paul, who was a member of the study team, says: “Around 20 percent of the 443 Totos examined were already experiencing complications from the disorder. The problem appeared severe as Totos do not allow inter-caste marriages. That means their offspring are affected with the ailment.”

Not many Toto people living in Totopara seem to know about thalassemia. Indrajit Toto, a traditional priest in the village, says: “It is difficult to say that we are suffering from any disease as there have been no medical tests. It might be present but I’m not sure.

“A medical team that arrived over a decade ago had claimed about the prevalence of the disease. But nothing was done after they left. It is true that people die young here and a youth who was just in his early 30s passed away a few days ago. We witness three to four young deaths in a year but have never seen anybody going for blood transfusion.”

Public healthcare in Totopara is no better than in thousands of other small Indian villages. There is one Primary Health Centre (PHC) with a few facilities. Serious cases must be taken to Dalgaon, a village about 40 kilometres away.

Saurabh Bhowmick, the medical officer in charge of the PHC, says: “We do not have the facility to conduct high-performance liquid chromatography (HPLC) tests to identity thalassemia patients. We cannot even do autopsies to ascertain the cause of death.”

Bhowmick, who has been in the village for five months, adds: “Most people here are suffering from tuberculosis (TB), diarrhoea and hypertension. But I am yet to come across thalassemia patients.”

Medical experts say high cases of TB could be due to the air pollution caused by quarrying. Lorries carrying stone chips are constantly moving in the area, raising clouds of dust.

Above: Stones are transported constantly through Totopara.

Sajal Biswas, general secretary of Service Doctors’ Forum (SDF), a Kolkata-based association of doctors, says: “Stone crushers have an adverse impact on health due to the presence of silica. It could lead to severe respiratory problems and even TB. The authorities should do a proper examination to find the reason behind people getting affected with the disease.”

Bleed image: The checkpoint at the India-Bhutan border next to Totopara. The stone-crushing operations in Bhutan can be seen in the distance, behind the checkpoint.

— All photographs courtesy of The Third Pole/Gurvinder Singh.

Gurvinder Singh is a journalist based in Kolkata. He tweets @Gurubha32660201.