About 10,000 litres of heavy fuel oil spilled into Karnaphuli River in Bangladesh on 25 October, spreading over a stretch of more than 16 kilometres. It poses a serious threat to the hundreds of fish species and to a breeding ground of the critically endangered Ganges dolphin.

According to environmentalists it is a “major disaster” for dolphins as spilled diesel or any other type of oil severely damages the food chain of a river or a canal almost immediately after contamination. The diesel spill in the Karnaphuli River is a threat to the local biodiversity, especially the Ganges dolphins as the 22-kilometre stretch of the river from Karnaphuli estuary to Shah Amanat Bridge is their breeding ground. At least 20 dolphins have died unnaturally in Karnaphuli and Halda rivers in the past four years, mostly due to pollution. 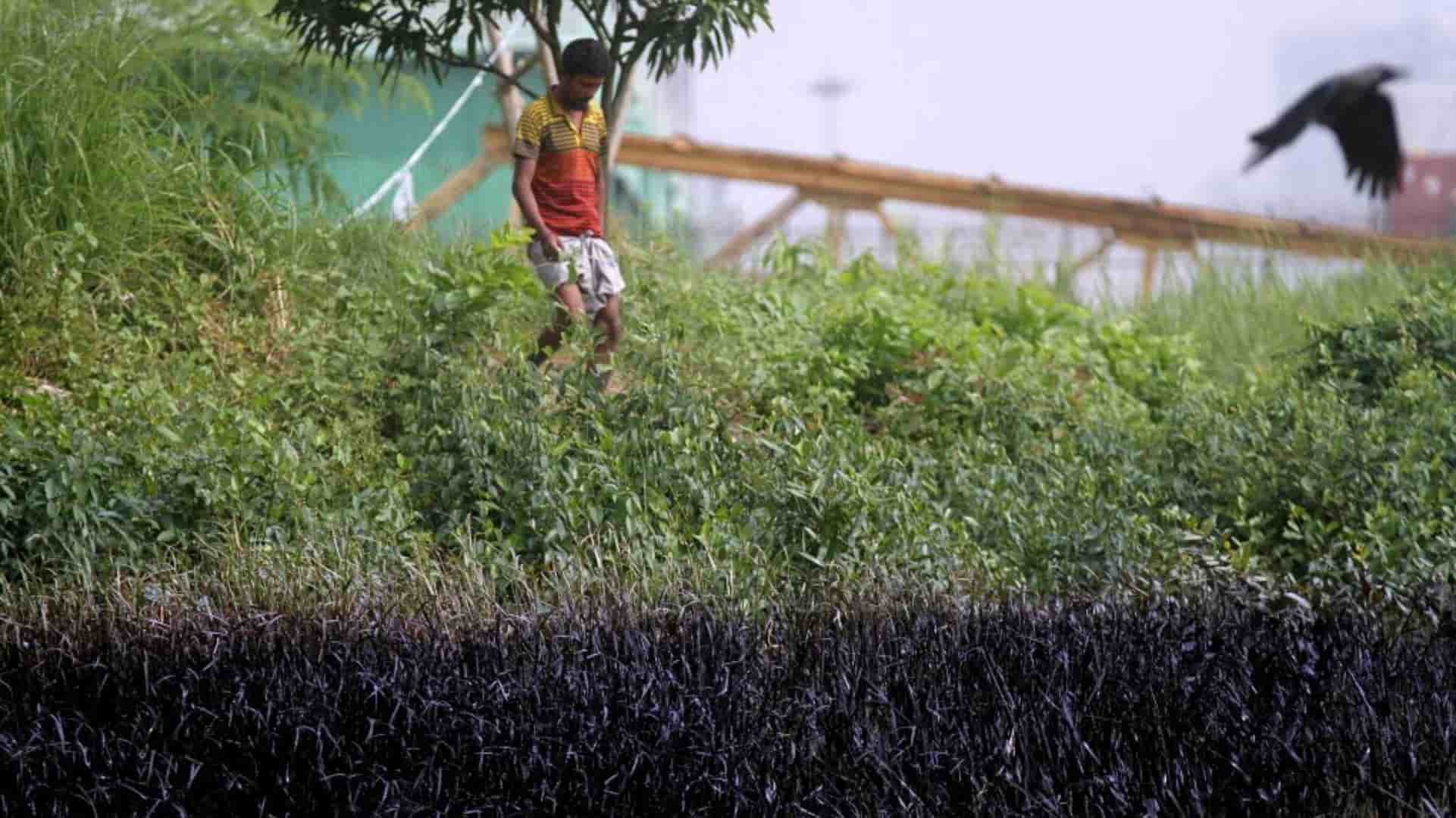 Above photo: A week after the oil spill, the grass, shrubs and small trees are still coated with oil on the banks of the Karnaphuli river. This photo was taken on October 31, 2019. Image courtesy: Mohammad Minhaj Uddin/ The Third Pole

Mohammad Shafiqul Islam, a professor at the Institute of Marine Sciences at the University of Chittagong, described it as major disaster for the river’s dolphin population as they could inhale toxic petroleum vapours when they surface to breathe.

“Subsequently if the habitats are oiled, the dolphins could experience both acute and chronic exposure through their respiratory system and through ingestion of contaminated prey. Dolphins as local residents of the Karnaphuli River system will be affected by the oil spill if the oil sinks to the bottom, as they scoop up significant quantities of sediments during feeding,” he told thethirdpole.net.

Mohammad Al Amin, a dolphin researcher at the Institute of Forestry and Environmental Sciences, University of Chittagong, said that the Ganges dolphin population will be irreparably harmed by the oil spill. “It will create a long-time impact on the biodiversity and on phytoplankton and zooplankton.”

What caused the oil spill?

On November 3, more than a week after the spill, one could see grass, shrubs and small trees coated with oil at Shah Amanat Bridge, Moyeshkhal point, Saltgola and Dangarchar areas. A thick layer of diesel was seen on the surface of the mud during low tide. Oil was seen on rocks and trees on both banks of the Karnaphuli.

Following the accident a team from the department of environment (DoE) visited the area on October 26. They said at least 1.5 million square metre area of the river has been affected severely. Their report said the oil spill will take a heavy toll on aquatic life as the thick and sticky oil slick settles on the surface of the river. They also said the oil would spread into adjacent canals due to tidal movements.

Azadur Rahman Mallick, director of DoE of Chittagong (Metropolitan) said, “The oil will harm the marine ecosystem directly, and it also blocks the sunlight entering the water and reduces the dissolved oxygen.”
Environmentalist Idris Ali said, “Due to such repeated oil spills in the Karnaphuli, the river will lose its ecosystem if stern measures are not taken now to save the river.” The deputy conservator of the Chittagong Port Authority (CPA), Faridul Alam, said they had cleaned up 80% oil from the river. He also said it was given “high importance” due to the dolphin breeding zone.

What do the port authorities do to control oil spill?

Around 90% of all this passes through Chittagong, largely transported by 500 oil tankers. In the Karnaphuli River there are five oil handling points of the CPA known as Dolphin Oil Jetty (DOJ). At DOJ- 5, 6 and 7 oil is handled for the BPC while DoJ-3 and 4 are used for handling edible oil.

In 2010 the CPA formed an Environment Management Team (EMT) to prevent spillage of waste oil from ships. The CPA bought a waste collection vessel named Bay Cleaner-2 for this purpose. They also have two boats to collect oil in the traditional way, using foam and cloth.

Unfortunately there is not enough manpower to run the EMT. Sources said that they needed 64 people to run the department properly, but they have only 10 people. 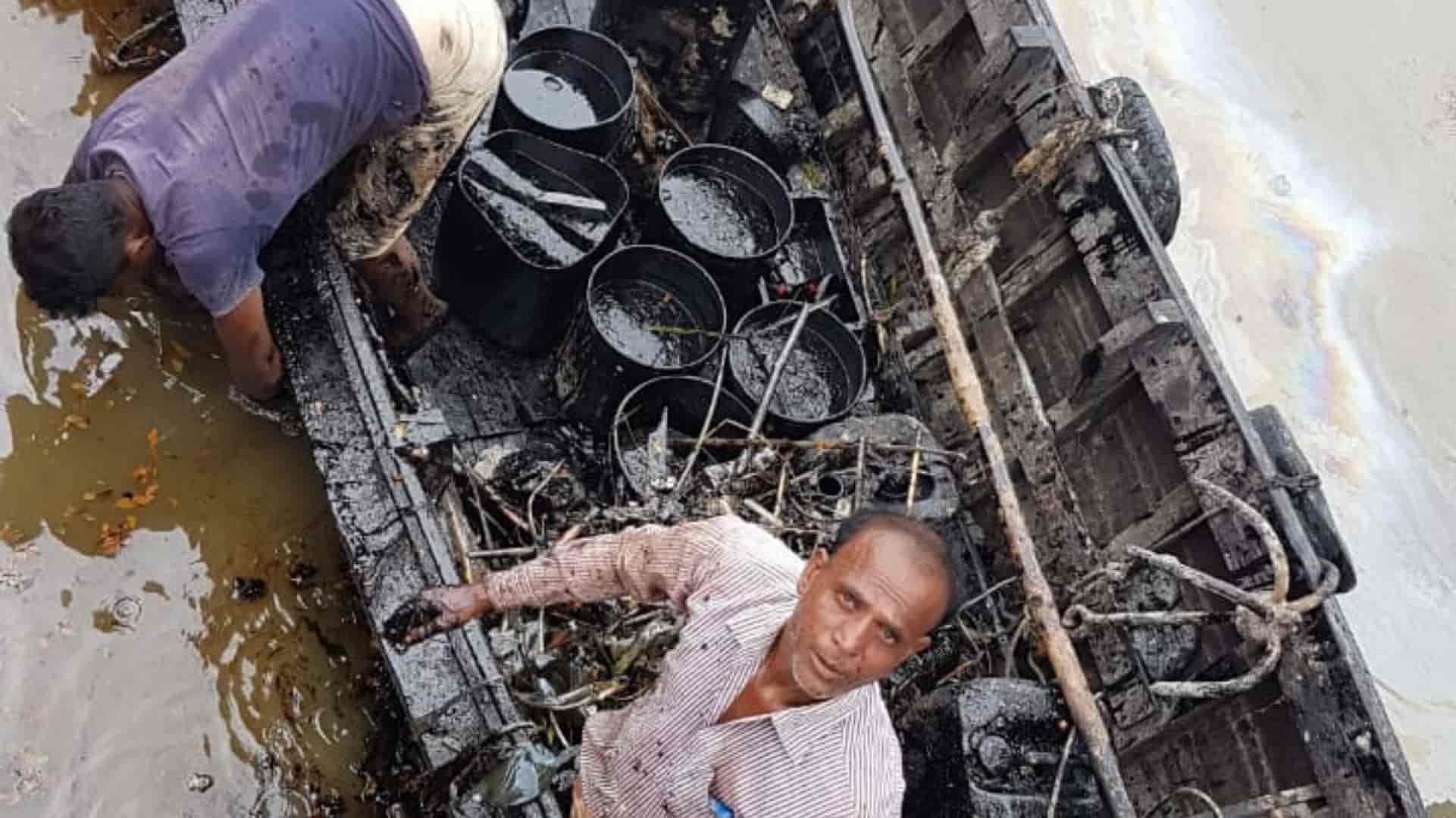 Another problem is that under the 1976 CPA Ordinance, the fine for causing such problems is capped at BDT 100,000 (USD 1,118), said CPA secretary Oamar Faruk. This is a minor sum that cannot help pay for the cleanup of even a small area. This is what happened in 2016 when an oil tanker named Arzu spilled over 15,000 litres of diesel.

This time the CPA has handed over the matter to the DOE, which has fined the oil tanker BDT 30 million (USD 355,000).

No expertise, no contingency plan

Environmentalist Idris Ali said that a lack of skilled crews on tankers has meant that such accidents are taking place almost every year. Compounding the problem, the CPA does not have the skilled manpower to clean the oil. They should buy modern equipment and appoint enough manpower to deal with such disaster as every day thousands of tonnes of oil are being handled, he added.

Fahmida Khanam, a director at the DoE, said, “The lack of a contingency plan extended the damage as it was not defined immediately after the accident who will take the responsibility, and how the oil would be cleaned.”

Bangladesh started to formulate a national oil spill contingency plan in 2015 following a Memorandum of Understanding (MoU) signed in 2010 among five coastal countries in South Asia – Bangladesh, India, Pakistan, Sri Lanka and the Maldives – to avoid further large-scale damage and also receive cooperation from other countries in the region to jointly to tackle such accidents. The DoE under, the Ministry of Environment and Forests, is leading the work.

After many years the National Oil Spill and Contingency Plan has been finalised and is now waiting for the approval of the cabinet, said Khanam.

Banner image: The oil, both floating on the river, and subsumed by its sediments, is a major danger to aquatic life. Image courtesy: Chittagong Port Authority/ The Third Pole