In ongoing efforts to deal with monkeys causing disturbances and impacting health in human settlements, the Delhi government is planning a census of monkeys (rhesus macaques) in the capital city. The monkey species, which has now adapted to the urban environment, is often involved in cases attacking humans. After two decades of effort, the government has now roped in the Wildlife Institute of India (WII), Dehradun, to study the “numbers and behaviour” of the animal.

In 2018, more than 950 cases of monkey bites were reported in the capital. The proposed census will help the Delhi government identify the number of monkeys in each area. “It will help us to locate the troublesome areas and we can make comprehensive plans for each ward of Delhi where people are facing this problem,” a senior official of Delhi government told Mongabay-India.

The presence of monkeys has increased in the residential areas of Delhi in the last two decades. Even the high-profile bungalows and apartments – where the ministers, members of parliament, judges and other senior officers live – are not spared. 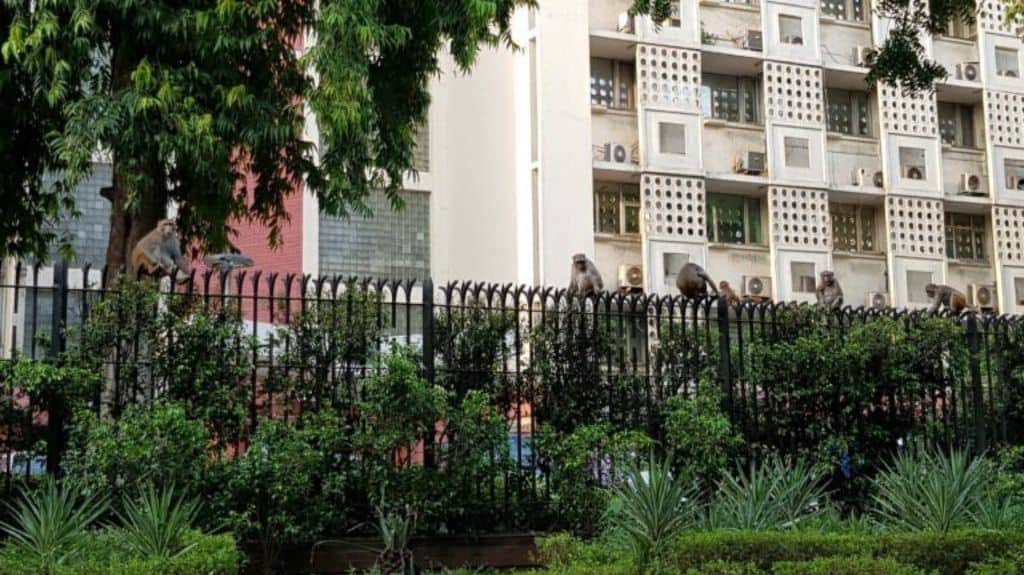 Monkeys in and around central government offices, which is a VIP zone, are now a common sight. Photo by Hridayesh Joshi.

This is being reported as the “monkey menace”.

Parliamentarians too have raised the issue in the house several times and Lok Sabha (the lower house of parliament) secretariat has had to issue guidelines for members to keep themselves safe from the attack of monkeys. Several members of parliament also asked questions related to the problem.

“For the last two years, I am living in the Meena Bagh area, which is next to the parliament house. We face a terrible problem with monkeys. Though we have covered our houses completely, the monkeys run wild and destroy whatever comes their way. We can’t even dry our clothes in the terrace outside,” said Gurjeet Singh Aujla, a member of parliament from the Amritsar Constituency in Punjab.

In a locality behind Bara Hindu Rao hospital in Delhi, 27-year-old Raju Sharma was bitten twice by monkeys. He runs a small shop and said monkeys have become a big problem for shopkeepers, patients, nurses and doctors.

“They have bitten so many people. They run amok here and have bitten nurses and doctors. A few days back they entered the record room (of the hospital) and created a ruckus,” said Sharma.

In 2003, the Delhi government had tried to relocate monkeys to the jungles of the neighbouring state of Uttar Pradesh and later to other states like Madhya Pradesh. But the plan was unsuccessful as the monkeys once again strayed towards the urban, human-dominated localities of those states, in search of food. Subsequently, the Uttar Pradesh and Madhya Pradesh state governments refused relocation of monkeys from the national capital.

What is driving monkeys to areas outside forests?

Experts see a number of reasons behind this problem – where monkeys have moved away from their natural environments into human settlements.

The destruction of the natural habitat of wild animals and monoculture forests are among the prime factors causing monkeys to move to Delhi. In the larger context too, experts point out that the absence of prey and loss of habitat are driving wild animals to urban settlements in search of food which is increasing chances of conflict between wildlife and humans.

“We have created this monster problem over the decades by destroying the forests and village commons where these animals would live. Also, the plantation forest just gives you timber but no fruit," Yogesh Gokhale, Senior Fellow, Forestry and Biodiversity Division in The Energy and Resources Institute (TERI), told Mongabay-India.

So, the monkeys have moved to urban localities in search of food for their survival. Warning boards such as these, requesting people not to feed monkeys as they can bite and be dangerous to human life, have been erected to make people aware of the problem. Photo by Hridayesh Joshi.

"Here the very inefficient garbage and waste management system has provided them ample food in the form of leftovers. So, the monkeys have adapted very well and learned to live with humans in urban conditions,” he adds.

The problem of monkeys has not been a major poll issue in either the assembly or parliamentary elections, even though it impacts several people, including the parliament members and is costing the government millions of rupees every year. Corruption, inflation, power cuts, water and women-safety are the regular issues that find a space in the election manifestos of political parties.

“The problem of monkeys is definitely there but it is mostly limited to some areas and those areas are mainly posh localities,” said Saurabh Bharadwaj, who is a member of the Delhi legislative assembly (MLA) from the ruling Aam Aadmi Party representing the Greater Kailash assembly constituency from south Delhi. “Monkey problem never became a poll issue but certainly it was raised in the committees of assembly and we are trying to address this (problem),” Bharadwaj told Mongabay-India.

So far, the Delhi Government has tried several ways to deal with the monkeys, with one of the efforts keeping Ravi Kumar, who imitates langur sounds, busy. Kumar is hired by the government and he makes the sound of langur (Himalayan baboon) around residential localities, government buildings and public hospitals to drive away monkeys.

“First, we used to deploy langurs to shoo monkeys away but wildlife activists objected to it by saying this is atrocity against the animal,” said Ravi Kumar. Ravi Kumar is one of the many professionals hired by the Delhi government to scare away monkeys and help relocate them to a sanctuary. Photo by Hridayesh Joshi.

Therefore, we now mimic the langur’s voice and drive the monkeys away, he adds.

After the orders of the Delhi high court, the municipal bodies of the capital have hired professionals like Kumar to relocate monkeys to the Asola Bhatti Wildlife Sanctuary situated at the Delhi-Haryana border. This work started in March 2007 and till September this year, a total of 21,871 monkeys had been transported from the city to this sanctuary, as per the official records at the sanctuary.

The sanctuary employees explain that the government is spending around Rs 1.2 crores (Rs 12 million) every year to feed the monkeys. More than 21,000 monkeys have been captured and shifted to the Asola Bhatti Wildlife Sanctuary at Delhi-Haryana Border. Photo by Hridayesh Joshi.

“Everyday 2,500 kilograms of seasonal vegetables and fruits like banana, guava, cucumber, tomato and corn is given to these monkeys so that they remain within the sanctuary and don’t stray towards the city,” Kesar, who is one of the caretakers in the sanctuary, told Mongabay-India.

Can sterilisation be a solution?

Besides shifting the monkeys to sanctuaries away from the city, another way that has been suggested to tackle the problem of monkeys is to control their population by sterilisation.

Himachal Pradesh, the northern state of India, has been running a drive to sterilise monkeys since 2006 and more than 140,000 monkeys have been sterilised so far. Himachal government claims that the number of monkeys has dwindled by more than 100,000 between 2004 and 2015 due to this effort. Yet, the drive did not provide any relief to the farmers or common people of Himachal. In fact, in 2017, Himachal Pradesh had to declare the monkeys as “vermin” in 10 districts under the Wildlife Protection Act 1972 because according to the government the animal was becoming a danger to human life and crops. Once an animal is declared vermin, the authorities are allowed to put them down (culling).

However, activists say that the entire exercise is just a waste of public money and it will only worsen the situation.

“The failed programme of monkey sterilisation of the Himachal government has cost more than Rs 300 million (Rs 30 crore) to the public exchequer. The whole process is so botched up that it has made monkeys more aggressive towards humans and now the government had to declare the animal vermin in the state,” said wildlife activist Gauri Maulekhi, who is a trustee of People for Animals (PFA), a non-profit organisation run by the Bharatiya Janata Party leader and former union minister Maneka Gandhi.

Now, the Indian government’s Ministry of Environment, Forest and Climate Change has launched a programme with the help of the National Institute of Immunology (NII) and Wildlife Institute of India (WII) to develop a new immunocontraception technique which will inject a vaccine to prevent female monkeys from making babies. The programme aims to control the population of the elephant, wild boar and blue bull (neelgai) along with the rhesus macaques. Wildlife activists feel that contraception has worked in several countries and will be a good way to control the monkey problem.

They think it's a better solution than “useless sterilisation” or a transportation programme of monkeys.

“Transportation or displacement of monkeys is no permanent solution. However (in Delhi), Asola Bhati is something that the high court has directed. It is a temporary solution; we are working on the immunocontraception technique which has worked the world over on wild animals. It is the only thing which is going to help contain the population (of monkeys) without making the situation worse,” said Gauri Maulekhi.

Banner image: The Delhi government has decided to carry out a census of monkeys. Photo credit: Hridayesh Joshi.