Marathwada is the epicentre of India’s agrarian crisis. Farmers in this dry region of the western province of Maharashtra have been killing themselves over wilted crops and impossible debts. Erratic rainfall and rising temperatures due to climate change have added to the distress. Smallholder and marginal farmers are the worst-hit.

Farmers in this parched land continue to cultivate water-guzzling soybean, cotton and sugarcane, and when landholdings are less than five acres, they have no fallback at all if the crop fails.

Usha Pade came to the Pimpri village of the Kallam administrative block in Osmanabad district as a young bride to Sideshwar in 2001. Her husband owned a small patch of land where on one acre he tried, and mostly failed, to grow some sugarcane. The remaining three acres in this parched section of Marathwada remained unused. We had no option but to work as labourers in other people’s farms, recollects Pade.

“We worked in the farms from sunrise to sunset. When my first daughter was a toddler, I had to carry her while working. Sometimes, we were so tired that we couldn’t make it back home and used to sleep in the field.” For all their toil, Pade and her husband were paid as little as INR 50 (USD 0.70) per day.

Life held out very little hope for Pade, now 35 and mother of two daughters and a son, if it had not been for a fortuitous association with Swayam Shikshan Prayog (SSP) in 2014. The Pune-based non-profit was at that time trying to empower women farmers through various farm and non-farm initiatives in many districts of Marathwada.

Pade joined an SSP workshop and was immediately convinced to join an innovative farming initiative that relied on multi-cropping on a small plot of land without using any chemical inputs. She started cultivating a few varieties of vegetables on half an acre of her land and started a vermicompost pit (a form of composting using various forms of worms, mainly earthworms). Although the results were not too encouraging in the first season, she persisted and gradually brought her family’s entire four acres under diversified organic farming.

Today, Pade can be held up as an example for women farmers all over Marathwada and beyond. “I’m harvesting four crops a year and earning at least INR 250,000 (USD 3,500) every year after feeding my family properly,” says a beaming Pade. She has become adept at cultivating a variety of crops ranging from okra, tomato, fenugreek, pigeon pea and coriander, and has started earning extra from a small papaya plantation as well.

This is a remarkable achievement given that Marathwada continues to make headlines for its farming crisis. 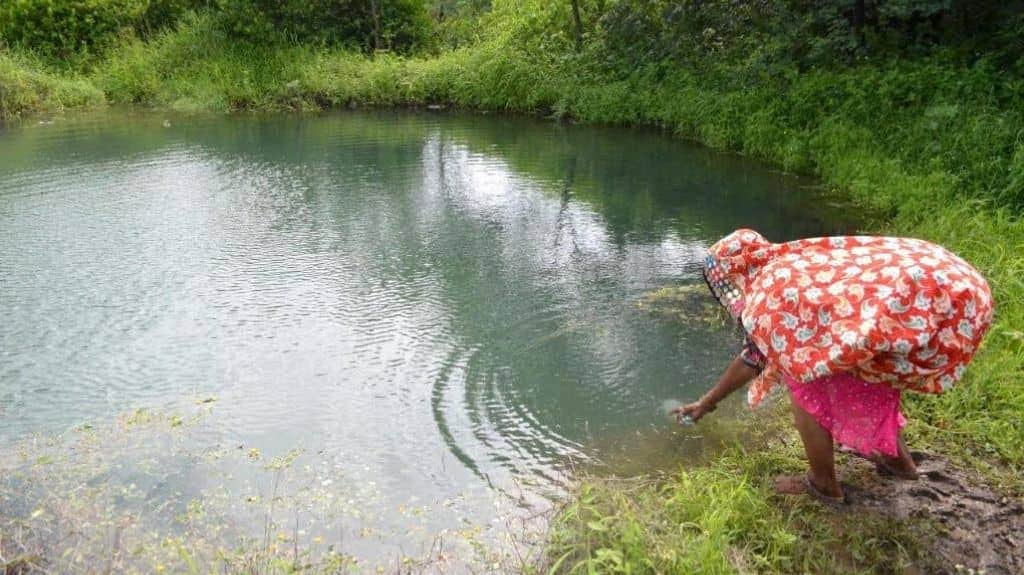 The region suffered from five years of consecutive droughts between 2012 and 2016, which has rendered agriculturally unviable, especially for smallholder and marginal farmers. In a desperate attempt to earn some profit from diminishing resources, farmers are still growing water-hungry crops in this parched area and using ever more chemical inputs, resulting in not just loss of income but also soil fertility.

Monsoon rainfall, which is the mainstay of crops in Marathwada and adjoining Vidarbha regions of Maharashtra, has become increasingly erratic and scant, partly due to climate change. Studies have found that most of Marathwada is affected by frequent moderate or severe droughts, while some parts have seen extreme drought conditions.

Despite such dry conditions, cropping patterns paint an alarming picture. Water-guzzling sugarcane is cultivated widely, leading to an ever increasing water scarcity. Such unwise farming practices have led to a loss of more than two million farmer livelihoods, according to a 2015 study by the South Asia Network on Dams, Rivers and People (SANDRP), an advocacy group.

Marathwada farmers planted sugarcane on 230,530 hectares of land in 2013, SANDRP found, which required 4,322 million cubic metres of water to grow. Another 23 million cubic metres of water was needed while crushing the cane to extract sugar. “The region has already seen a rise in extreme weather events and unseasonable episodes,” the study said. “In such a situation, a more diverse cropping pattern is imperative.”

Marathwada is home to some 19 million people, according to the 2011 Census, out of which about 73 percent live in villages and depend mostly on rain-fed agriculture for a livelihood. But unsustainable farming, droughts, water scarcity and rising temperatures are now placing the survival of this entire population at risk.

India is grappling with a farm crisis and Maharashtra is one of the states where the situation has reached a tipping point. In 2016 alone, 11,379 farmers committed suicide in India, with Maharashtra accounting for nearly a third of these incidents, according to data released by the National Crime Records Bureau on 9 November this year. Approximately 250,000 farmers have killed themselves in India in the past 25 years, official data show. 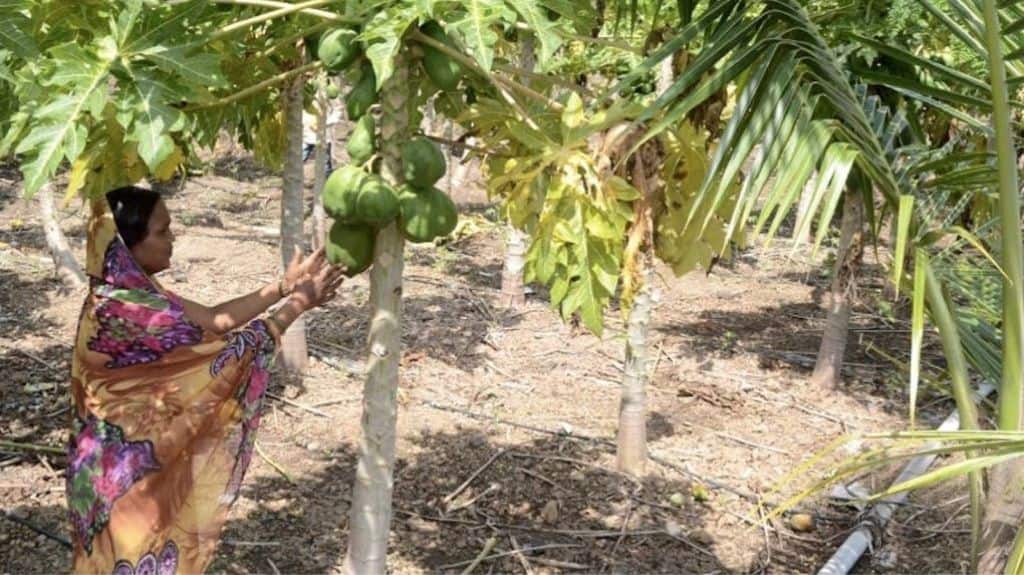 Sustainable and diversified agriculture is the only solution to stop deepening India’s agrarian crisis.

“Water insecurity lies at the core of the crisis,” said Prema Gopalan, executive director of SSP. “We must reduce wasteful use of water. Shifting to organic farming (which increases soil fertility) to grow drought-resistant varieties that provide additional incomes and household nutritional security is a viable option, as we have seen among thousands of smallholder women farmers in our field areas.”

SSP has enabled more than 70,000 women farmers in Marathwada to shift to what it calls the one-acre model, an innovative way of practising climate-resilient agriculture. Instead of the traditional approach of focusing on cash crops, these women have placed nutritional needs of their families first by growing mainly food crops and vegetables.

A shift from the traditional practice of growing cash crops like soybean and cotton that require more water and more chemical inputs also helps conserve the environment and health of the people. Once the women become successful, they start selling the surplus for an additional income that provides them with a buffer in lean years and also pays for household health and education costs.

“My daughter (18) is preparing for medical entrance exams,” said Vijaymala Shendage, 40, of Wagholi village in Osmanabad district. “My son (16) wants to become a civil engineer.” She has come a long way from the time when she and her husband were wage labourers struggling to eke out a living.

Shendage started her journey as an organic farmer at around the same time as Pade on 10 ghuntas of land (forty ghuntas make one acre.) Today, she has been able to ensure nutritional security for her family of five by practising diversified farming on one acre of land. The family continues to grow soybean on the remaining three acres.

“As other families in our village saw how we have become successful, they too started adopting our methods,” said Shendage. Gopalan also pointed to this multiplier effect. “Although we have directly worked with some 70,000 women farmers, the cumulative effect of our intervention is at least three times of that,” she said.

This would mean that upwards of 200,000 women smallholder farmers across Marathwada are practising this model of climate-smart farming. A back-of-the-envelope calculation shows that there would be some four million farmer households in this water-stressed region, out of which about 40 percent own less than four acres of land.

The number of households who have become climate-resilient is already statistically significant. But for a wider transformation of Marathwada, many more need to be encouraged to shift to this eco-friendly means of livelihood.

The most innovative aspect of this model is that it places rural poor women, who are traditionally treated as mere labourers, at the centre-stage as farmers and decision-makers. It empowers and recognises rural women as farmers, changemakers and mentors for innovation, knowledge transfer and replication.

“We have successfully demonstrated that it is possible to encourage women farmers to shift to water-wise and climate-resilient agriculture, and that too in fairly large numbers,” said Gopalan. “We now require wider participation by various government agencies and programmes to make a more meaningful and sustainable change in the agricultural landscape of Marathwada.”