The bylanes of Kumortuli — Kolkata's famed artisans' colony, located in the north part of the city — may seem dark, narrow and tacky to the casual observer. Come September, however, thousands throng these very alleys, looking for god (and goddesses).

Kumortuli is home to more than 250 artisans; in the weeks leading up to Durga Puja, these artisans get busy shaping idols of the goddess and her four children. Compelling stories and images emerge from this potters' lane. The artisans of Kumortuli, however, battle a number of issues, not the least being a high incidence of malaria, dengue and diarrhea, lack of drinking water and hygienic conditions, and poverty.

Over the last 30 years, idols made in Kumortuli have travelled across the world. Fame hasn't changed the lives of the artisans in any meaningful way, but still they toil, infusing the carefully crafted deities with the divine.

[Below] A man sells accessories for idols of Durga, near Kumortuli. A glimpse through a window, into a traditional studio. 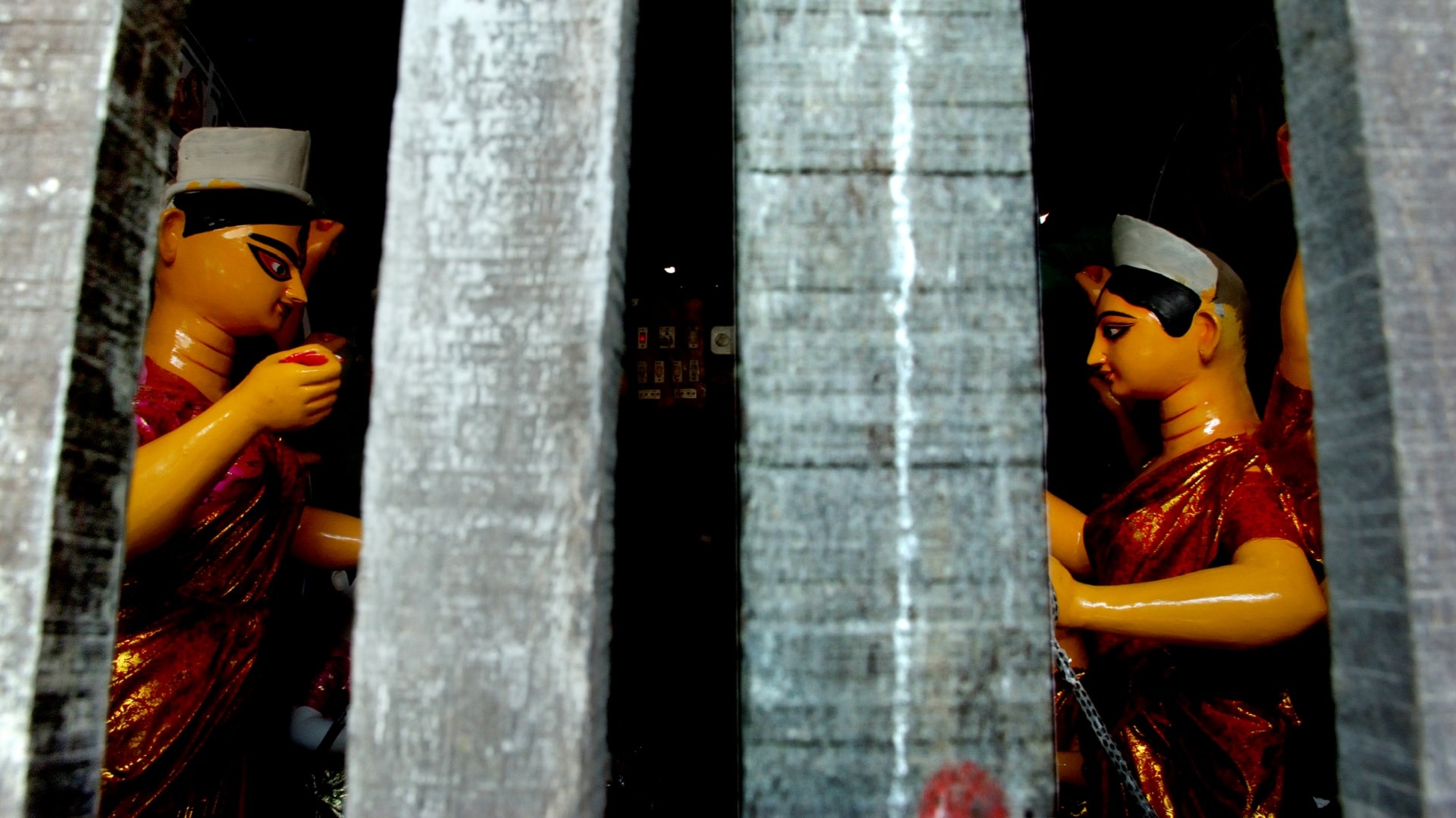 An old man is busy sculpting an idol while his helper looks for water. An old woman guards her son's studio while he is out on a lunch break. 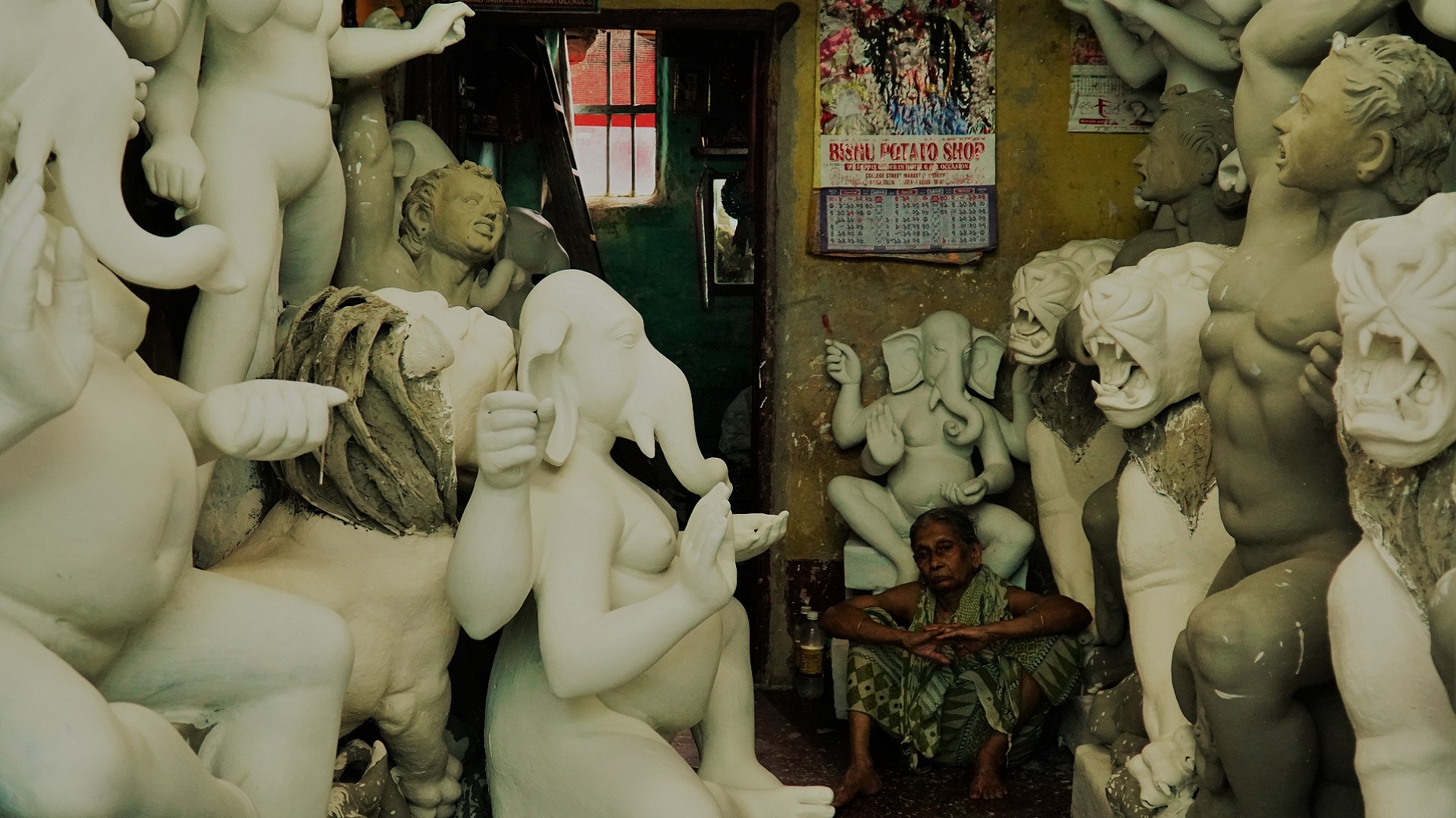 A few women have breached this formerly all-male bastion and established themselves as idol makers. China Paul and Kanchi Paul were among the first women to take up this men's-only profession. Here, China Paul is seen seated at her studio. China's father Hemanta Paul, a renowned potter, passed away in 1994. She then took on the responsibility of his studio and takes pride in being one of the most trusted potters in the colony. Every artisan is extremely involved in the process of creating the idols. Each puts their best into their craft. 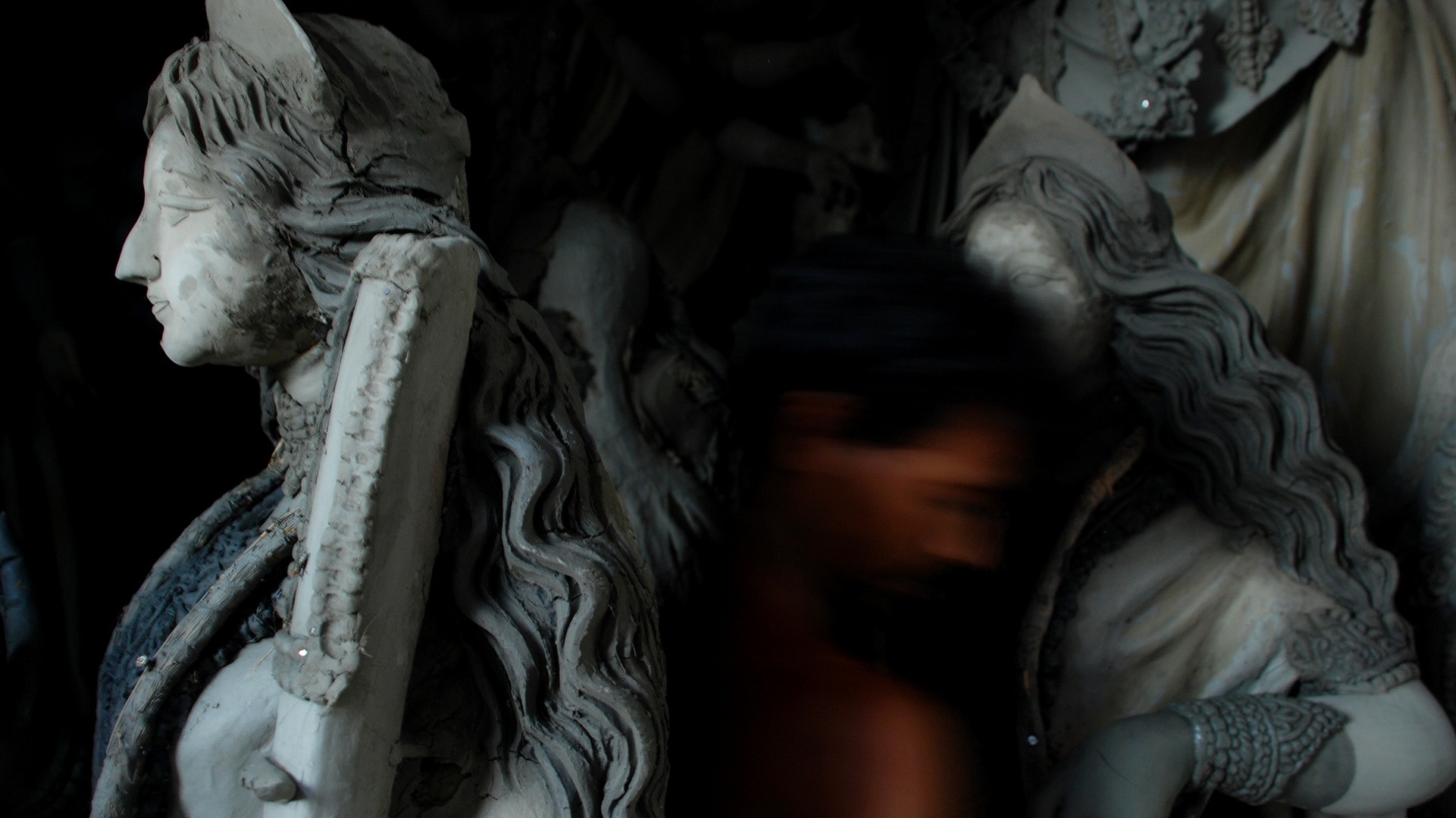 Kanchi Paul took up the profession in 2003, when her husband passed away. She says of the rush during the September-October period, "When everyone else goes pandal-hopping, that's when we finally get some rest." Ready idols at the studio. Idols being taken to the pandals by carriers. 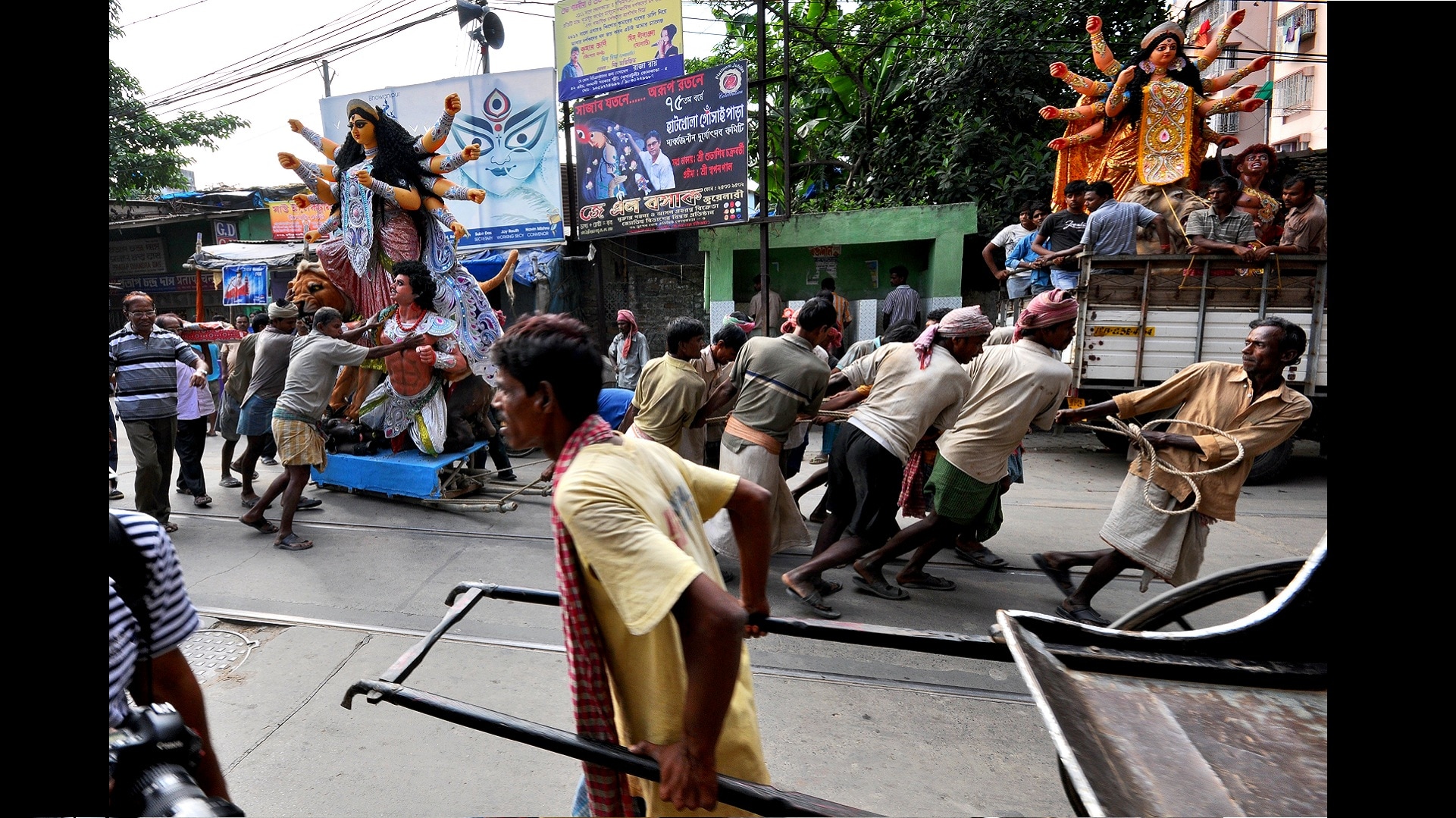 Shaping the idol's face is the most difficult and important task among all. Here, an artisan concentrates on crafting a deity's visage. 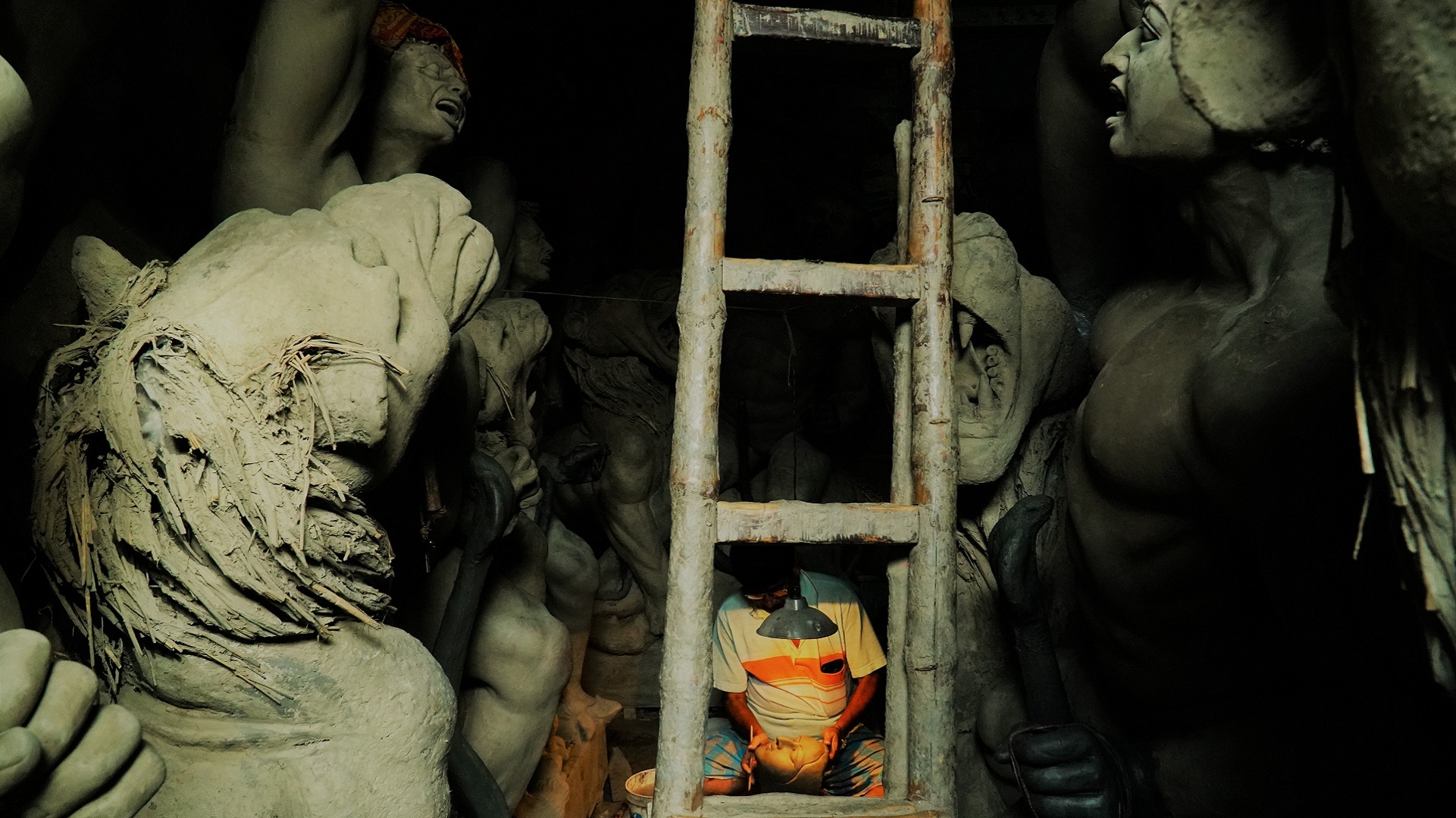 The artisans cannot move away from their studios until all the work is done. An artisan has lunch in his studio as his pet cat looks on. The beginning phases, when clay models are given a proper structure. 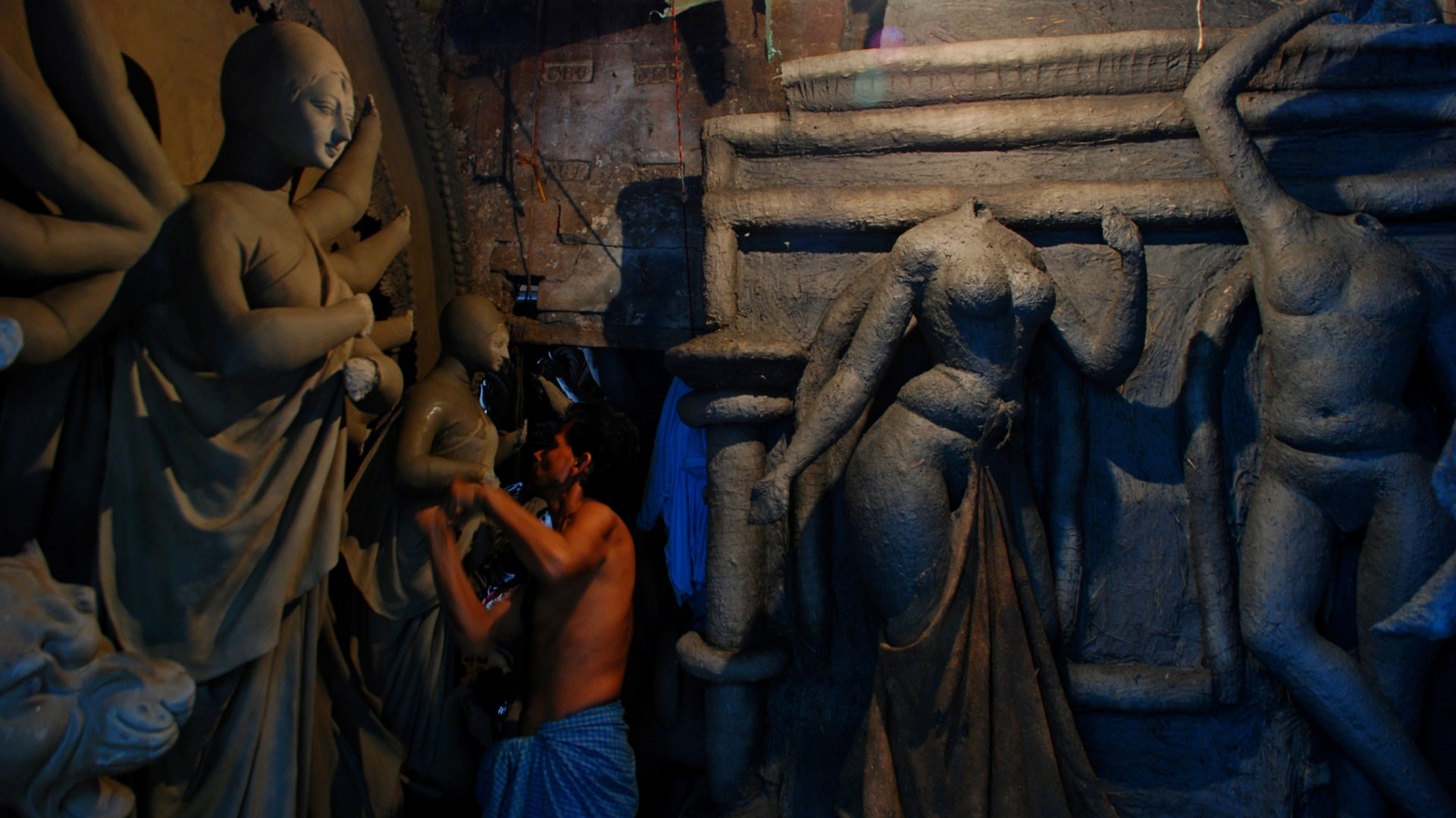 The rush in Kumortuli starts in the month of July itself. A shade protects a clay idol from the rain. 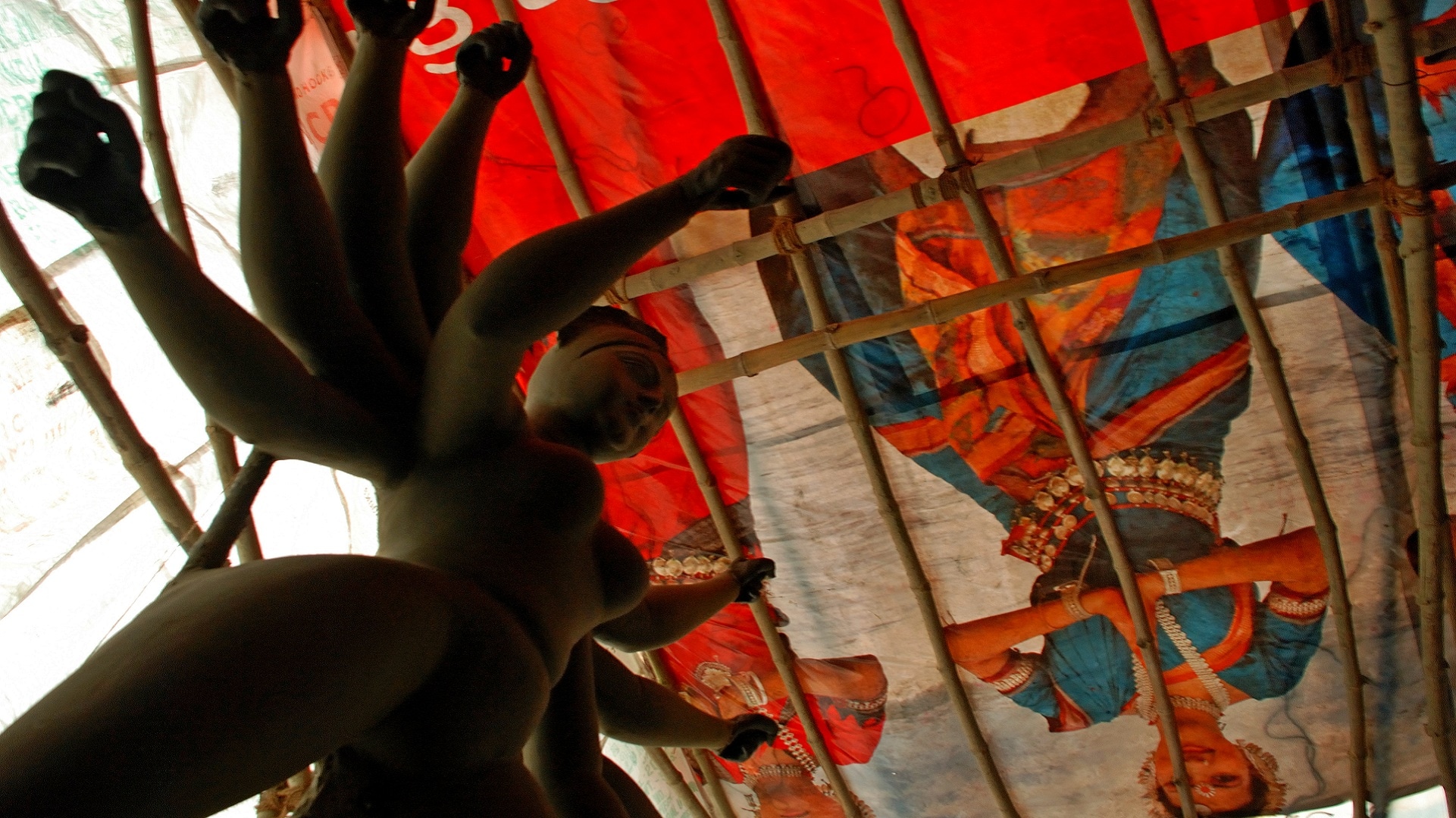 While hygiene and cleanliness remain a major problem area in the congested lanes of Kumortuli, potters prefer cleaning studio surroundings on their own.