Animal and floral motifs in a contrasting shade made the palm-sized piece look exquisite — but for a blot. An uneven, black dot, almost at the centre. “This black dot is because of too much iron in the water that the cloth was washed in as part of the dyeing process,” the tenth-generation Ajrakh craftsman said, “It spoiled this piece.”

The sample he was holding was one of the many examples of beautifully — and laboriously — dyed and block-printed Ajrakh cloth material being discarded in small and big workshops across Ajrakhpur in the state’s coastal district of Kutch because of aberrations introduced by its groundwater. Ajrakh is a block-printing technique wherein specific wooden blocks bearing different designs are dipped into a plate of dye or colour and stamped on to flowing pieces of cloth. The cloth can be cotton or silk. It is a water-intensive, 16-stage process that takes time and is much in demand among Indian and international buyers. 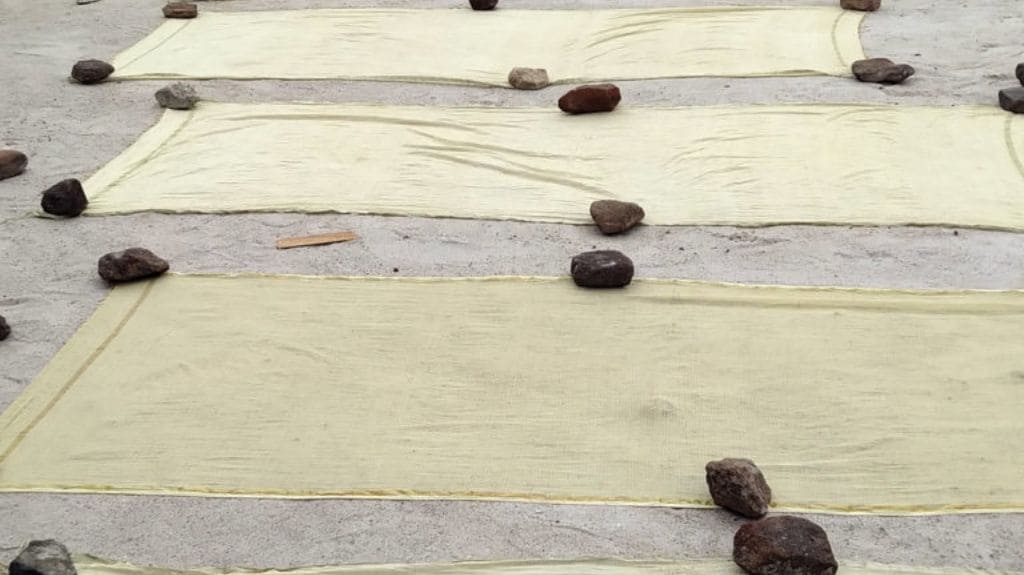 But iron contamination in groundwater, a lowering water table, and increase in salinity, are threatening the age-old craft in this village of artisans.

It is, however, not the first time that water has posed a challenge to Ajrakh in Kutch. Last time something like this had happened, the entire village of a hundred families moved from their earlier settlement in Dhamadka to their present location, 40 kilometres away, in search of good quality groundwater. This transition was after the devastating earthquake in 2001.

“Water and good quality water is essential to the survival of Ajrakh,” Sufian Khatri, who is a ninth-generation Ajrakh craftsman, said. Sufian traces his roots to the 16th century when his ancestors were said to have carried the craft all the way from Sindh. “I have grown up hearing how, back in the 18th century the river Sindhu (Indus) used to flow through Kutch from Sindh. Red rice used to grow here. And the natural colours used in Ajrakh were of exquisite shades, enhanced even more by the good water,” he said. Then, in 1819, there was an earthquake, and the river got diverted.

Almost two centuries later, after Kutch suffered yet another devastating earthquake in 2001, Sufian said that the quality of groundwater changed. “Every night, after their namaz, when the craftsmen would sit together for a chat, notes would be exchanged on how many pieces were destroyed because of the iron-induced black spots. Some would have lost 50 pieces, some a hundred,” he said.

“One of the initial stages is when the cloth is dyed with myrobalan and then washed.  If there is even one percent iron in water, the (pale yellow) cloth gets black spots. We tested and found seven percent iron content in the groundwater in Dhamadka,” Sufian explained.

Finally, his father, Ismail Khatri, and some others decided to survey other locations to relocate the families for the sake of their craft.

They aimed to look for a place with good quality groundwater. 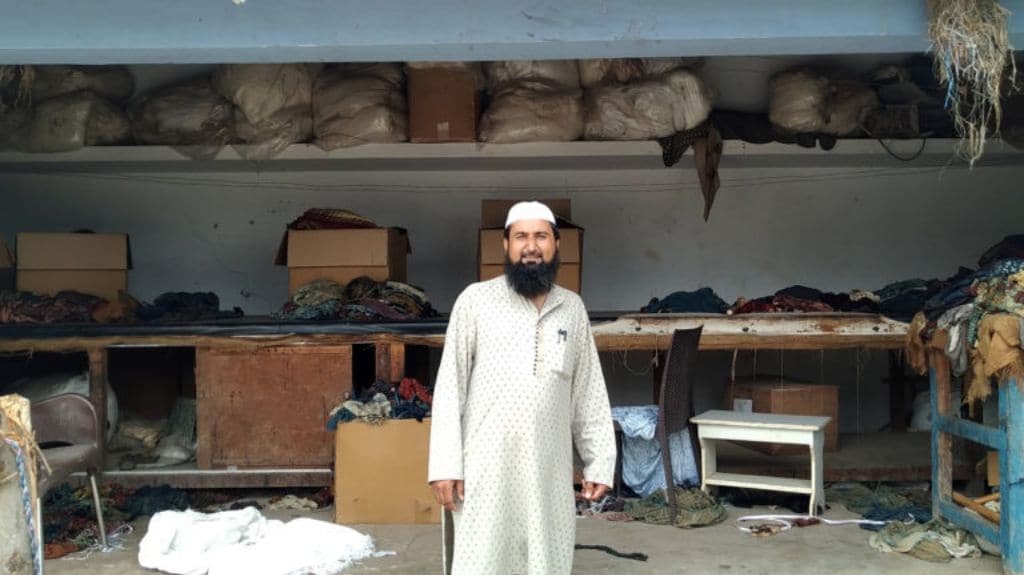 Sufian Khatri whose family had initiated the community to move from their earlier settlement in Dhamadka to the present location post the 2001 Bhuj earthquake. Good quality water was one of the main reasons for them to move here. Photo by Azera Parveen Rahman.

Thus they came to their present address, and the village was named Ajrakhpur, which lies at a distance of 335 kilometres from the state capital, Gandhinagar.

The present scenario is, therefore, like revisiting the past. But with additional challenges. “The water table is going down like never before,” said Sikandar Usman Khatri, an Ajrakh craftsman. “When our family had just moved in here, water would start bubbling at a depth of 200 feet. It was good quality water. But when I had to dig a private borewell for additional water supply for my growing business, the depth was 450 feet,” he added. The water is also turning increasingly saline, Sikandar further said.

The change in water quality and lowering of the water table, say most artisans, is because of the climate vagaries. “Instead of raining over a period of time, it now rains heavily on some days, and then there is a dry spell,” said Khalid Khatri, a young craftsman. Natural disasters like earthquakes can impact groundwater quality, say most of them — a fact that is echoed by specific scientific research papers as well.

An increase in groundwater salinity, again, is a fact that a coastal district like Kutch has been facing in the form of saline water ingress. According to a 2017 Status of Coastal Salinity Report by the Gujarat Ecology Commission (under the state government), the entire Gujarat coastline had “sweet water until the end of the 1960s”. But from the 1970s onwards, it was found that the groundwater salinity had increased from 3,500 parts per million (ppm) to 9,000 ppm at a distance of two kilometres from the coast, and from 860 ppm to 2,060 ppm at a distance of five kilometres from the coast.

Seventh-generation Ajrakh craftsman and Khalid’s father, Amin Khatri, said that small-time craftsmen like him are hit harder economically due to the cloth being marred by imperfections stemming from dwindling water quality. “I was so disheartened with my losses after the 2001 earthquake, that when we moved here from Dhamadka, I stopped doing Ajrakh. Instead, I opened a grocery store,” the master craftsman said, standing in his small workshop, amid the delicately carved wooden blocks lying on one side of a long table.

Khalid, who is now well-known for his modern take on Ajrakh printing, however, motivated him to go back to his traditional craft. “But now this (water problem) has started again in Ajrakhpur. It’s not as bad as it was in Dhamadka, but who knows about the future? We use water from the community well. The more well-to-do craftsman have dug wells in the hope of better water. Not all have succeeded — they have put in money,  but the water quality remained the same. But we don’t even have that choice,” he said.

Sufian Khatri’s family, for instance, bought a plot of land close by for a private borewell as they needed more and better quality water. “We had to drill 600 feet for water, but it turned out to have even higher iron content than in the village,” Sufian said. Washing of the cloth takes place in a community washing area. Photo by Azera Parveen Rahman.

Some craftsmen say that if they had the resources to own a piece of land, the loss could probably be somehow compensated.

“The water used in Ajrakh can be used to irrigate crops because it is free of any chemicals. But we don’t have land to do agriculture,” said a craftsman, Hamid.

Over the years since the water problem started surfacing, the community has explored different solutions. One has been of their own making — a filter in which water was made to pass through layers of charcoal, sand, and stone, thereby removing iron. It was effective, but a tedious process, mainly because the charcoal had to be replaced in short intervals.

In 2007, Khamir, an organisation that works for the conservation of art and craft in Kutch, decided to intervene after doing a geological survey of groundwater in the area. “We implemented a pilot project of setting up an effluent treatment plant (ETP) that used bio-water technology to recycle the water that was used in the Ajrakh process,” Ghatit Lehru of Khamir told Mongabay-India. The water used in Ajrakh, by virtue of the natural dyes used in the process, can be recycled and used in agricultural fields. The recycled water from the treatment plant could also be reused for the entire Ajrakh printing process in itself.

By this time, the ensuing water problem led to an upswing in the application of chemical dyes in Ajrakh printing among a section of craftsmen, and as Ghatitbhai said, the ETP “was not seeing 100 percent efficacy”. The community covered 50 percent of the total cost — around Rs 100,000 — of setting up of the ETP. “But it’s recycling capacity was much lesser than our requirement of recycling one lakh litres of water every day,” Sufian Khatri said. Even then, Khamir handed over the functioning of the ETP to the community.

More recently, however, an ongoing process of setting up a Common Effluent Treatment Plant (CETP) by the government through the Northern India Textile Research Association (NITRA) has given renewed hope to the artisans of Ajrakhpur.

The treatment plant has a capacity of recycling 1.5 lakh litres of water every day. The Common Effluent Treatment Plant is in the process of being set up. It will save water and save energy costs. Photo by Azera Parveen Rahman.

Rahul Srivastava of NITRA said that for the first six months after it becomes operational, the running and maintenance of the treatment plant — and training of the artisans on how to operate it — would be their responsibility. After that, the onus will be on the community. “The CETP has an iron filter and a dual media filter through which excess iron and other suspended matter will be removed from the water. It can then be reused in the Ajrakh process,” Srivastava told Mongabay India. The CETP is expected to be operational in the next two-three months.

Apart from water that is free of high iron content, the CETP will also help in water conservation.  “Normally we use one lakh litres of water in a single day. The CETP will ensure that we use the same amount of water in three days,” Sikandar Khatri said. There have also been efforts of rainwater harvesting in the village — an initiative that helps recharge groundwater. Sufian Khatri, for example, has a rainwater storage system of 80,000 litres in the front yard of his workshop. Half of it is full. Khalid Khatri and his father in their workshop. Photo by Azera Parveen Rahman.

There are also efforts to innovate the Ajrakh process, to make it less water-intensive.

“For example, instead of dyeing the background colour of the cloth, we are experimenting with printing it in the colour instead. Instead of washing the cloth under running water, we are now washing it in stored water,” Sufian said, “All these innovations, plus the CETP will reduce water usage by a big margin.”

Banner image: Fabric has been marred by the black dots as a result of high iron content in the water, making it unfit for sale. Photo by Azera Parveen Rahman.