The Indian government is in the process of auctioning out approximately 200 blocks in Jhelum river and its tributaries for mining of sand and other minerals. This is despite a recent study warning against large-scale mining operation in the Jhelum, and the advice of an environmental committee against haphazard mining in water bodies.

In 2018, the department of Irrigation and Flood Control (IFC) had asked the Central Water and Power Research Station (CWPRS) to do a detailed technical report covering a host of issues. This was also cited by a World Bank supported study for the Jhelum and Tawi Flood Recovery Project.

“The dredging de-silting/sand mining of the main channel of Jhelum from upstream to Asham is not advisable and may cause difficulties for the flood management. Re-sectioning by increasing the waterway width may possibly be taken up at few places only as recommended in the tour report of CWPRS officers,” the technical report concluded.

The report, CWPRS said, is based on the morphological analysis, site visits and analysis of unsteady flow conditions using 1-D unsteady mathematical model with the data provided by the state engineers including the hydrographs, their lag time of flood initiation and capacity curve for the various lakes.

“In addition to the works to be included in the interim scheme, CWPRS also recommended that further consideration be given to:

Considering the frequent flood threats from Jhelum and its tributaries, the IFC department has a large authority over these water bodies its approval is mandatory for any extraction of resources from them.

Despite these recommendations, mineral blocks in the Jhelum and its tributaries (which include sand, boulders and gravel) are being auctioned to mineral extracting contractors and companies by Jammu and Kashmir’s Geology and Mining department. By 10 February, 2020 sand blocks in Pulwama, Srinagar and Baramullah districts were auctioned against a bidding amount of Rs 720 million (USD 10 million) for five years.

Applications for the auctioning process were invited online (from 21 December, 2019) for the first time this year at a time when internet connectivity in Kashmir was completely blocked from the first week of August 2019 until the third week of January 2020. Since its restoration, only low-speed (2G) internet connectivity is allowed in the region. Internet was shut down across Kashmir following India’s decision to fundamentally change the semi-autonomous status of the mountainous state of Jammu and Kashmir on 5 August, 2019 and its subsequent conversion into a Union Territory (which, under the Indian Constitution, has comparatively limited powers).

Interestingly the reports recommending the limitation of mining were largely conducted during the time that the former state of Jammu and Kashmir was under Governor’s Rule, meaning that the central government is going against the very recommendations that were prepared under it.

The joint director of Geology and Mining Department in Jammu and Kashmir, Imtiyaz Ahmad Khan, said that his department has received written permission from IFC. However, an official of the IFC alleged that the IFC faces a lot of pressure from the government to grant such approvals.

“We are strongly against this extensive mining in Jhelum and its tributaries, particularly in south Kashmir as it can have huge consequences on flood management in Kashmir. But we are not able to assert our authority before the government,” the official said requesting anonymity.

According to the Water Resources Act  of Jammu and Kashmir, “The control of the bed and banks of all water sources, navigation channels, intake channels, city channels and flood spill channels together with all works that affect the hydraulic conditions in the State shall be under the Irrigation and Flood Control Department.”

Khan claimed that his department will take environmental and other concerns into consideration when the contractors start the work. “These are the resources required for raising of developmental infrastructure and housing. But we will definitely seek the opinion of experts on this,” Khan said.

But a member of Environmental Appraisal Committee of Jammu and Kashmir, which gives environmental clearance to such projects, said on the condition of anonymity, “We had advised the government during a meeting in December last year that no mining should be allowed in Jhelum and other rivers till there is a basin-wise scientific mining plan as to which area should be declared feasible for mining and which areas should be declared as river sanctuaries.”

“Any mining has to be done in a way so that it doesn’t cause problems in flood management or functionality of water bodies,” he added. Recently, he said, some 160 cases of mining from Jammu region had come to the committee for clearance, “but we didn’t find even a single case worth clearance.” He, however, alleged that the committee faces a lot of pressure to give clearances.

Now that close to 200 blocks are being formally thrown open for mining of minerals in Kashmir, there are apprehensions that large scale mining for sand and other minerals from the Jhelum and its tributaries can lead to severe environmental consequences. Given that the miners will be operating with the permission from the government, it would be hard for environmental activists and media to question them.

The Indian Institute of Technology (ISM), Dhanbad, cites an interesting example of how this works (or does not work) in practice. “Imagine this: a group of reporters are visiting a picturesque creek of a river on the western coast of India and are taking some photos. They are approached within minutes by a menacing gang in a large vehicle who interrogate them on their presence in the area. One of them roars: “who gave you permission to shoot here? We have purchased the entire creek for Rs 28 crore (INR 280 million / approx. 5.1 million USD). We own it now.”

Another related issue is that the change in Kashmir’s legal status now means that non-residents of the territory can now buy property in Kashmir and conduct business based on the region’s resources. 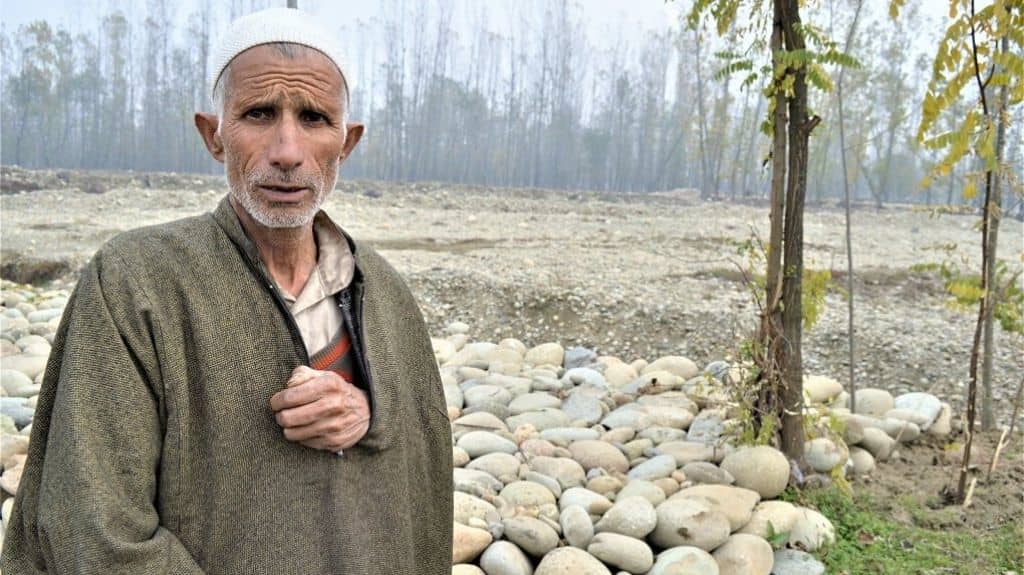 A man standing on the bank of a tributary of Jhelum in south Kashmir, Vishu. In autumn and winters, Jhelum’s tributaries have extremely low flows. Photo credit: Athar Parvaiz.

Earlier, these rights were only with local residents. Most of the mineral blocks auctioned so far, have been bought by companies from outside Kashmir.

In Baramullah, out of the 35 blocks, 28 blocks have been auctioned by 10 February. 19 of the 28 auctioned have been bought by companies from outside Kashmir against a bidding amount of INR 190 million (USD 2.66 million).

Local contractors allege that it is a “huge injustice” to them that natural resources, which provide employment to thousands of households in Kashmir, are now “open for sale” for anybody. “We are not in a position to compete with companies from outside. How can our resources match theirs? Obviously, they manage to buy most of the mineral blocks,” said Bilal Ahmad, a local contractor. Ahmad’s concerns apart, the large-scale auctioning also raises concerns that illegal mineral mining  of sand, boulders and gravel that has happened earlier, may now become beyond control.

Engineers in Kashmir’s Flood Control Department are aware of the consequences they are going to face in coming years because of large-scale mining in Kashmir’s rivers. “When you mine intensively in Jhelum and its tributaries, it is certainly going to leave an impact on local ecology as also on flood management in Kashmir,” said an engineer in Irrigation and Flood Control Department requesting anonymity. “For example, when massive exploitation of minerals is done in tributaries of Jhelum, it will increase the velocity of river flow, which, in turn, can result in instant flooding and over siltation in our water bodies such as Wular,” he said.

In recent years, Kashmir has faced many floods notably the devastating floods in 2014 which killed hundreds of people in parts of Kashmir controlled by India and Pakistan and caused losses worth billions of rupees.

Banner image: A view of the Jhelum in Srinagar. Photo credit: Athar Parvaiz.