It is just the onset of summer and mercury is already touching 42°C in Bundelkhand. Water has evaporated from most rivers and ponds. Tube wells and handpumps have gone dry here, in, one of the most underdeveloped regions of central India. Even urban households get brief water supply once in three days.

Water is the most precious item, found Mongabay-India while travelling through Jhansi, Lalitpur and Tikamgarh, three water-stressed districts in the hilly and plateau terrain of Bundelkhand which is spread over six districts in the states of Madhya Pradesh (MP) and seven districts in Uttar Pradesh (UP).

“There is no water left for irrigation and drinking water is likely to vanish in the next two weeks, like previous years. All 650 families here are having sleepless nights anticipating the hardships in coming days. Monsoon is still two months away and we would have to rely on water tankers once again,” says Rani, a resident of Rajpur, Talbehat tehsil of Lalitpur, UP, about 370 kilometres from the state capital Lucknow.

Districts in Bundelkhand, spanning UP and MP, are facing a water crisis. 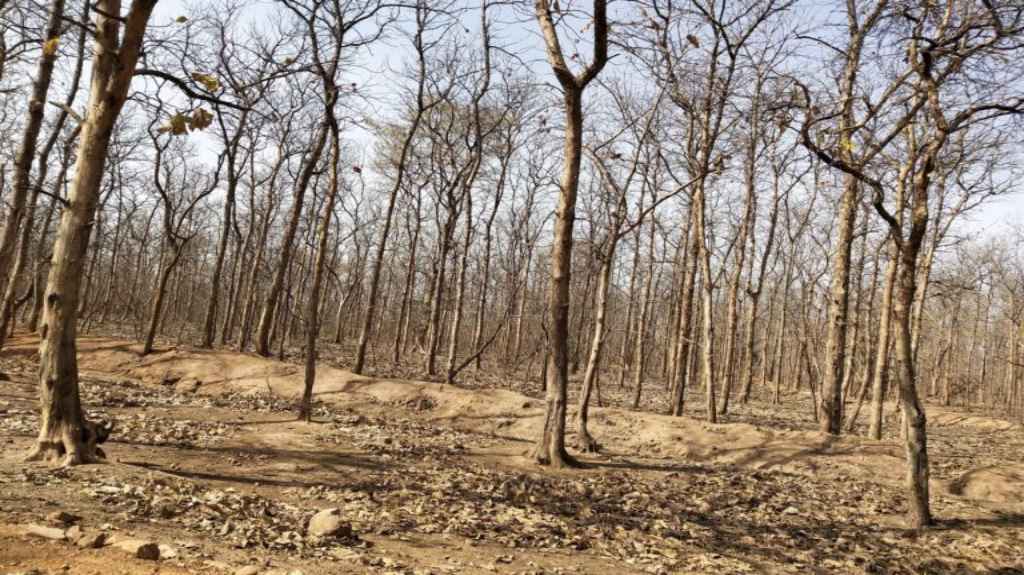 But just 15 kilometres away, in Chandrapur village, a part of the same tehsil, 170 families are comparatively more relaxed. A check dam, built by a women’s group, Jal Sahelis (women friends of water), five years ago, is full of water collected during monsoon. The water is being used extensively for irrigation and domestic purpose in the village.

Started in 2005 from Madhogarh in Jalaun, UP, the network of Jal Sahelis across 200 villages in UP and MP is reviving water harvesting structures and traditional water bodies through community participation.

“Over 670 rural women are working actively to change the fate of 200 villages. They are an inspiration to many others,” says Sanjay Singh who is guiding the network of water-women of Bundelkhand. Pushpa Vishwakarma (40), a woman farmer who set-up the Jal Saheli group in the village, says, “I got married in this village 22 years ago. Trekking long distances to fetch drinking water was a routine. Life of other women in the neighbourhood was not much different. Farming, household chores and then fetching water were taking a toll on our health and family life. It was the year of 2011-12 when we were told the importance of rainwater harvesting and we realised how important it was for the women of Bundelkhand.”

A check dam, built by Jal Sahelis in Chandrapur village (Talbehat tehsil, Lalitpur) has helped save rainwater which is now used for agriculture and household use.

The women joined hands and organised themselves as a Paani Panchayat under the mentorship of Singh, the founder of Jalaun-based non-governmental organisation Parmarth Samaj Sevi Sansthan and Jal Jan Jodo Abhiyan, a nationwide campaign which works to ensure water security through community participation.

The Jal Sahelis, who are illiterate or semiliterate, then involved the entire village for a 25-day massive digging exercise and revived a dying two-acre pond by converting it into a check dam before the monsoon season. Check dams are small, sometimes temporary dams built across the direction of water flow on shallow rivers or rain streams, for the purpose of water harvesting. They retain excess water flow during monsoon. The pressure created in their catchment area helps force the impounded water into the ground, resulting in the replenishment of nearby groundwater reserves and wells.

“Our hard work got recognition in the following summer when the check dam we built, recharged wells and handpumps and met the water needs of the entire village, including our farms and cattle,” said Devwati Sharma, another Jal Saheli.

The initiative brought a major socio-economic change in the village where agriculture was confined to a single crop, wheat, in the entire year. In Bundelkhand, canal irrigation is unavailable in most parts which severely hampers agricultural production leading to poverty, indebtedness and farmers’ suicide.

Ramkishore, a fellow villager says, “We never sowed more than one crop till a decade ago. Since water is now available round the year, we are sowing all three crops. Now, even animals from nearby villages come to drink water here. Very few farmers migrate now.”

In another village of Talbehat tehsil, Udguwan, the women take pride in their work of constructing a check dam and two ponds, eight years ago. Shirkunwar Rajput, a woman farmer who led the Paani Panchayat campaign in her village and doubles up as a cook in primary school, says, “Now the village is self-reliant in both water and food.”

anjay Singh who formed and guides the network of Jal Sahelis of Bundelkhand. As many villages in Bundelkhand are facing a serious water crisis, farmers are migrating to cities in search of water and jobs and women are walking for two-three kilometres to get water. Meanwhile, Chandrapur and Udguwan are set to grow pulses after harvesting the wheat crop, thanks to the efforts of the Jal Sahelis.

“These Jal Sahelis meet with women every month, discuss water distribution, potential water resources and problems and then follow it up with the authorities,” says Singh who ropes in private donors to bear the cost of construction material for check dams. The cost of one check dam is about Rs 2,00,000 – 3,00,000 and labour is provided by the villagers themselves. The network of Jal Sahelis across 200 villages in UP and MP is reviving water harvesting structures and traditional water bodies through community participation.

Water availability and awareness have encouraged many villagers to grow vegetables in their backyard and in unused small patches. “We don’t need to buy vegetables from cities as we started growing onion, potato, gourd and other vegetables in our small backyard. Banana and jackfruit trees have also started bearing fruits,” says Bharti Ahirwar of Nadiya village of Tikamgarh in MP. Even teenage girls in the district’s Nandanpur village are maintaining kitchen gardens after school hours to support their parents.

Woman have the first right on water resources: Jal Sahelis

Over the last five years, the Jal Sahelis have emerged as a group of empowered women who speak like seasoned activists. Clad in simple sarees and with their heads covered, the women water warriors speak in Bundelkhandi Hindi, a local dialect, and articulate the importance of water harvesting and rights of women as well.

“It is the women who suffer the most in Bundelkhand because of water scarcity," says Shirkunwar Rajput, the woman who led the Paani Panchayat in Udguwan, Lalitpur. “In Bundelkhand, fetching water is entirely a woman or girl’s job. Hence, women have the first right on water resources. And it’s women who can ensure water security for the community.”

At the check dams, these thoughts are literally set in stone which state, “Women have the first right on water resources.”

Water availability and awareness have encouraged many villagers to grow vegetables in their backyard and in unused small patches.

According to a World Resources Institute blog post, UNDP research on 44 water projects across Asia and Africa shows that when both men and women engage in shaping water policies and institutions, communities use water services more and sustain them for longer.

Pointing out that Bundelkhand got ample rains last monsoon, after seven years of consecutive drought, Ganeshi Kushwaha, a Jal Saheli in Nadiya village of Tikamgarh, says, “Every village could have enough drinking water this time had the people conserved and recharged their water resources during the last monsoon.”

Tikamgarh received 51 percent excess rainfall last year while the districts of Jhansi and Lalitpur had little less than the average, eight and 11 percent less respectively.

Was it difficult to convince people to take matters into their own hands instead of waiting for the government to do its bit? “It wasn’t, as everyone was suffering,” smiles Rajput, who has gradually emerged as a leader in her village, fighting for government funds to help all villagers get toilets and houses.

While the reach of the Jal Sahelis is limited, they hope that the government scales up its efforts for rainwater harvesting across India.

This article was originally published on Mongabay.com