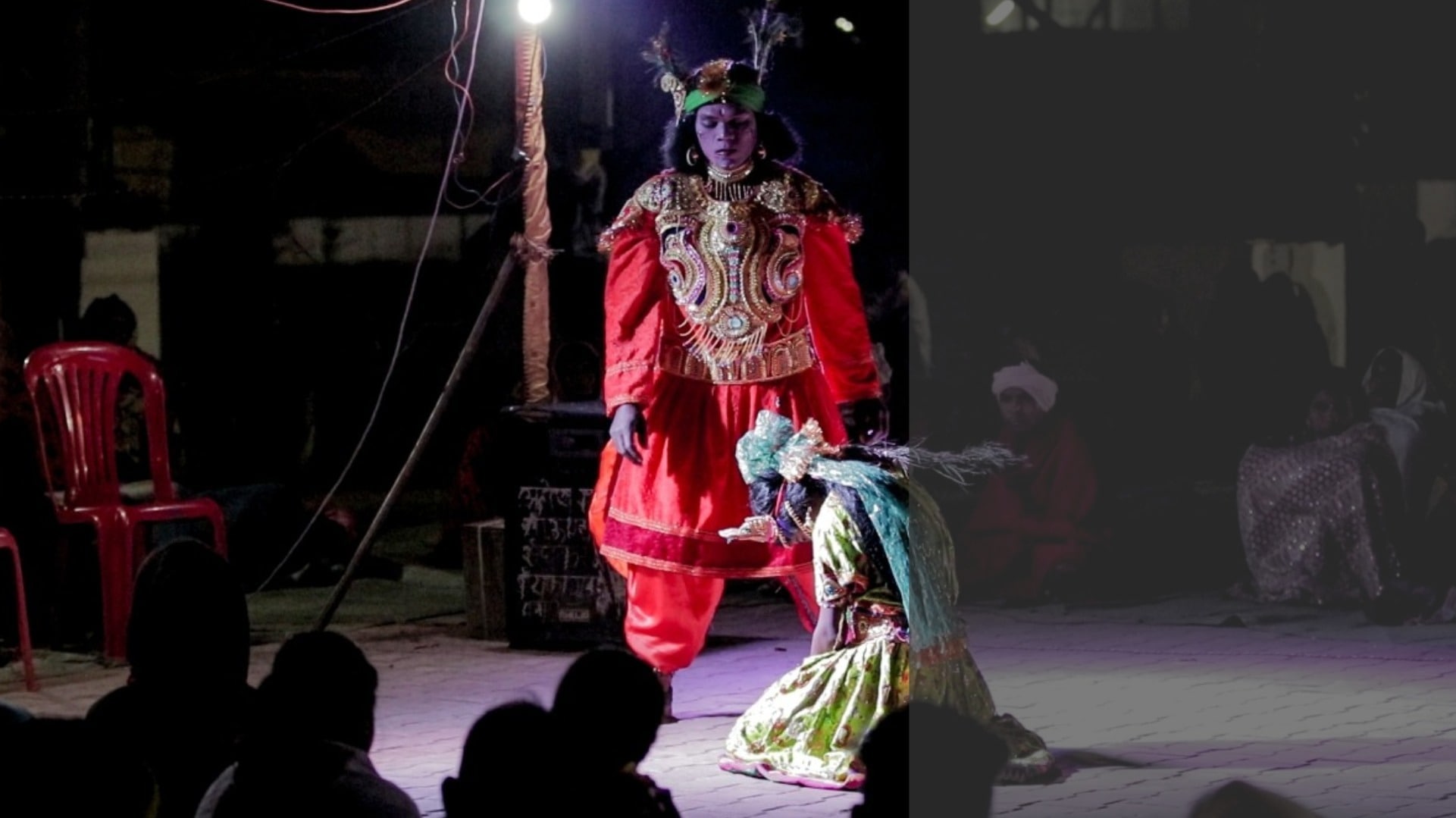 Dantewada town is about a seven-hour ride away from Raipur’s Swami Vivekananda Airport. Overloaded trucks hunker down the narrow strip of connecting road. The sparse landscape is dotted with leafless trees, everything covered in a layer of brown, with each set of tyres scattering the dust further. The festival of Phagun Madai that I am travelling for, is supposed to mark spring, but it is already scorching hot. On our way in, we stop at a market — a makeshift smattering of tarpaulin-covered units, selling everyday mundanities like incense and vegetables. Markets like these are not permanently stationed, they are put up by different villages, on different days, dissipating in the evening, no later than 5 pm. The fresh produce here is not sold by the kilo, but in batches. 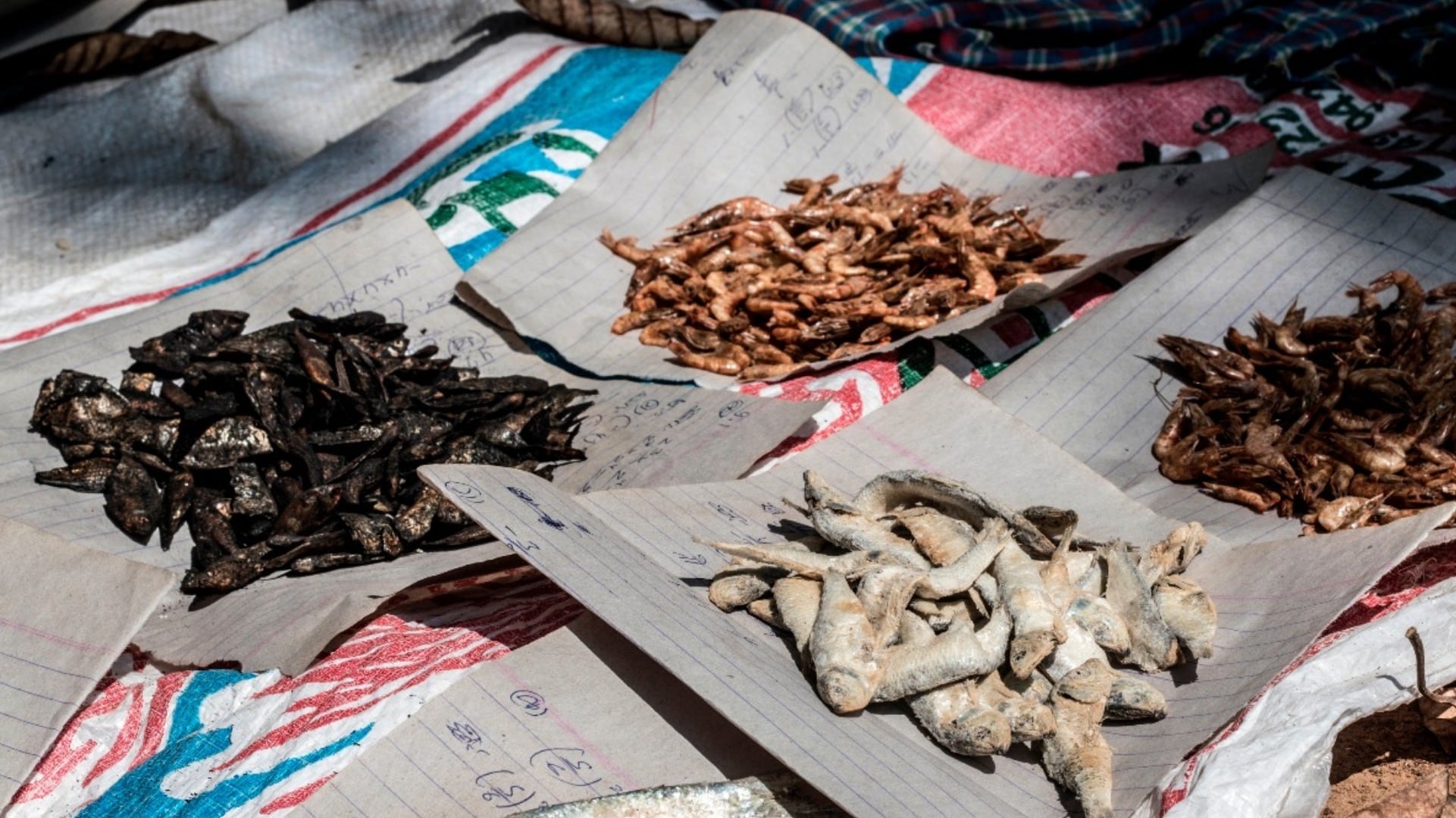 There are also women selling mahua (a local variety of alcohol made from the flowers of the mahua tree) at Rs 10 a cup. The cups are fashioned out of leaves, as are plates and bowls in these parts, I find out later over lunch the next day. In the distance a huge crowd is huddled into a circle — cock fight enthusiasts, I’m told. We are in tribal country and everything feels more novel than it would ordinarily. As we approach Dantewada, the sparse landscape has given way to roads lined with tall Sal trees, and Flame of the forest trees in bloom. Tall anthills are visible through the gaps, as the talk in the car veers towards chapra — the tangy chutney made out of red ants. 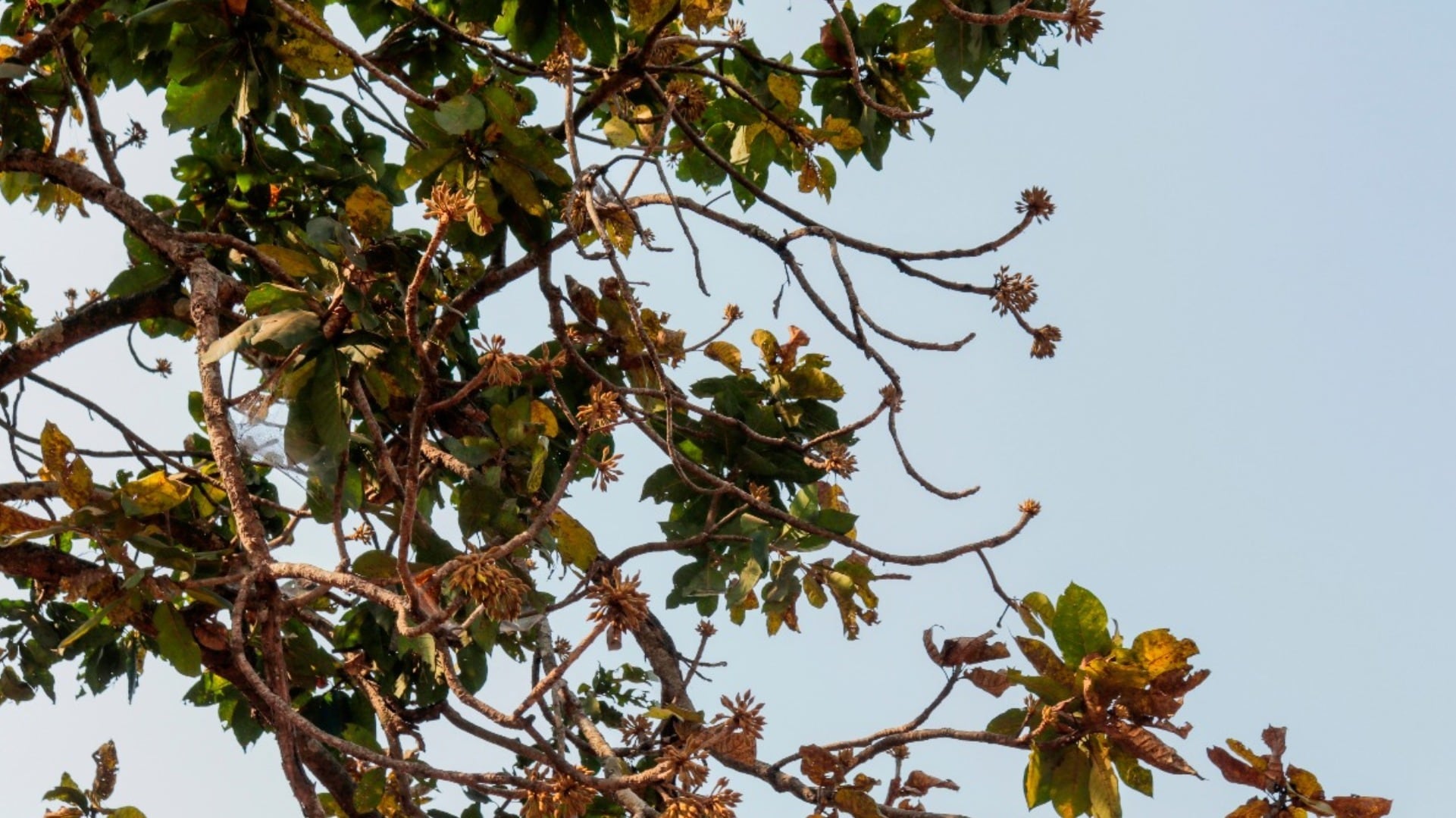 The simplicity with which women sit around selling, sipping and discarding cup after cup of mahua, is inspiring. They are more liberated than many in India’s cities, their organic life is perhaps primitive, but also so in line with their environment. 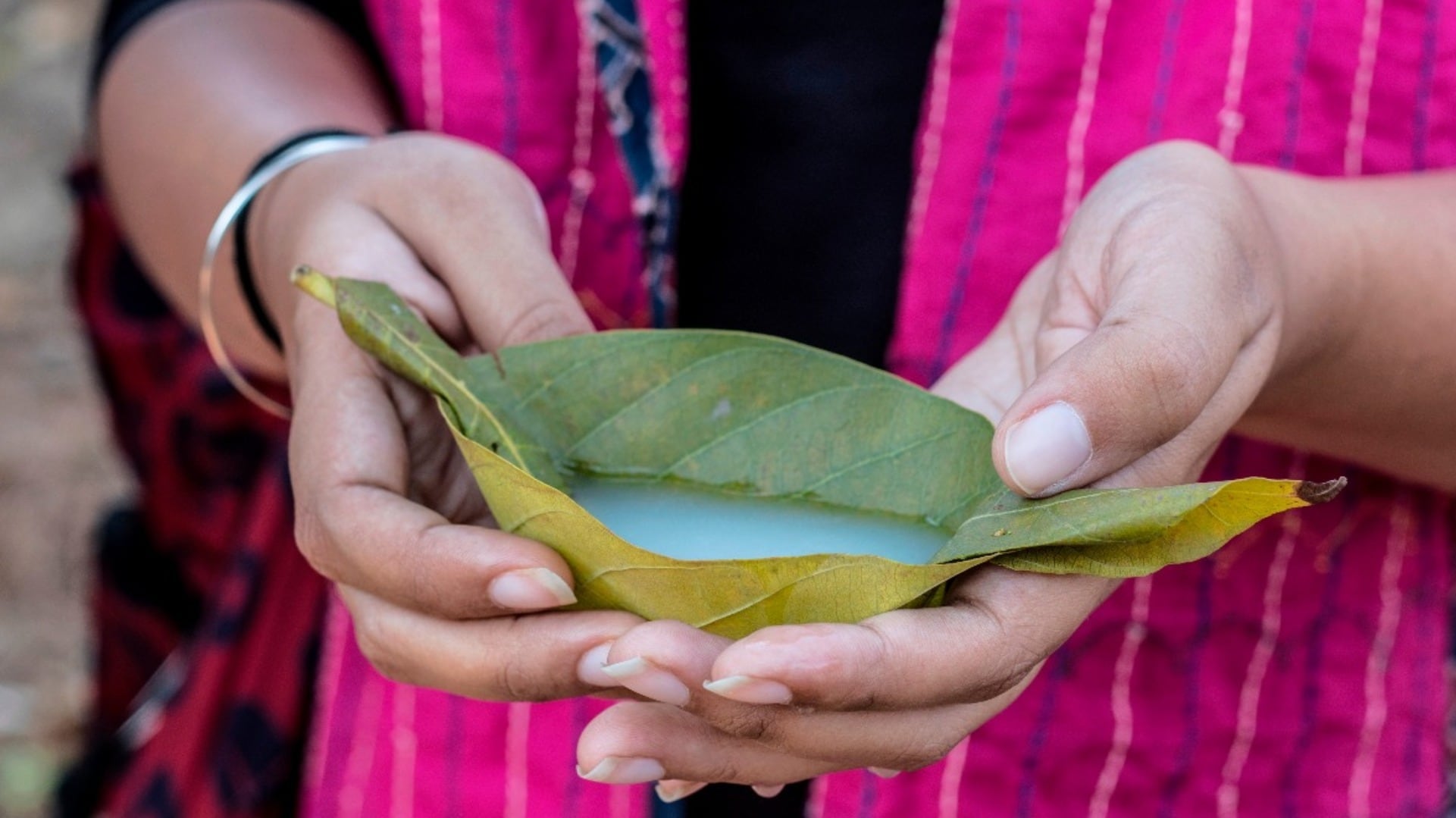 Besides mahua, the women are also selling maee, which is an alcohol made out of rice; this, I am warned, is intense for first time drinkers. The mahua tastes sort of like port wine, so I stick with that. The third and most popular alcohol here, salfi, is all sold out, as it tends to, by noon. Salfi is tapped from a tree with the same name and is highly prized, because it fetches a higher price. 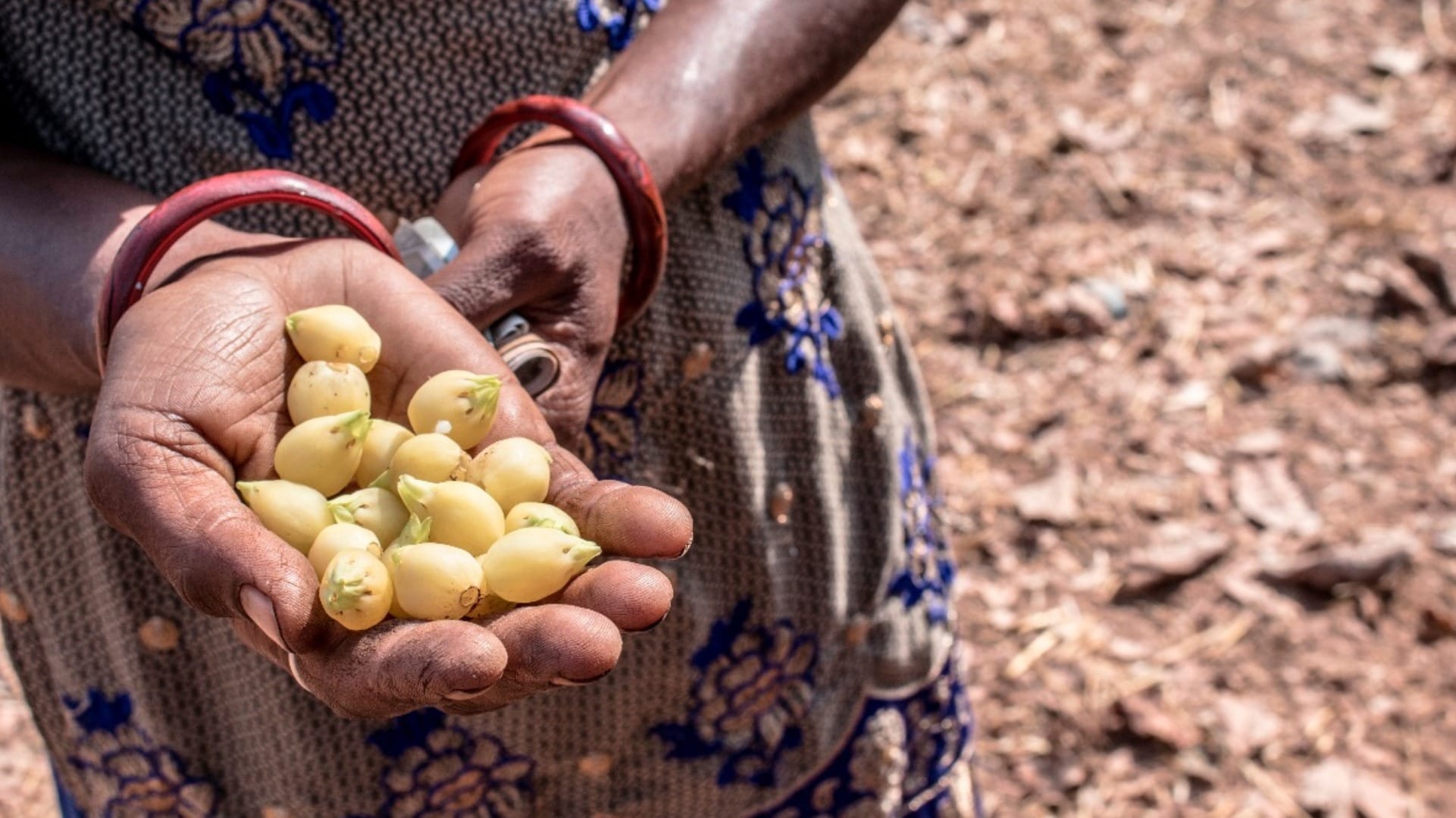 I walk around the market looking for muria — a small carved wooden comb. Young men give murias to the women they are interested in. The women wear the combs in their hair indicating how many proposals they have received, and once they settle on a partner, they wear only the muria given by him, removing all others. I want to buy some as souvenirs, but there are none available. I look everywhere I get a chance, but have no luck, maybe the practices are shifting, even if slightly? 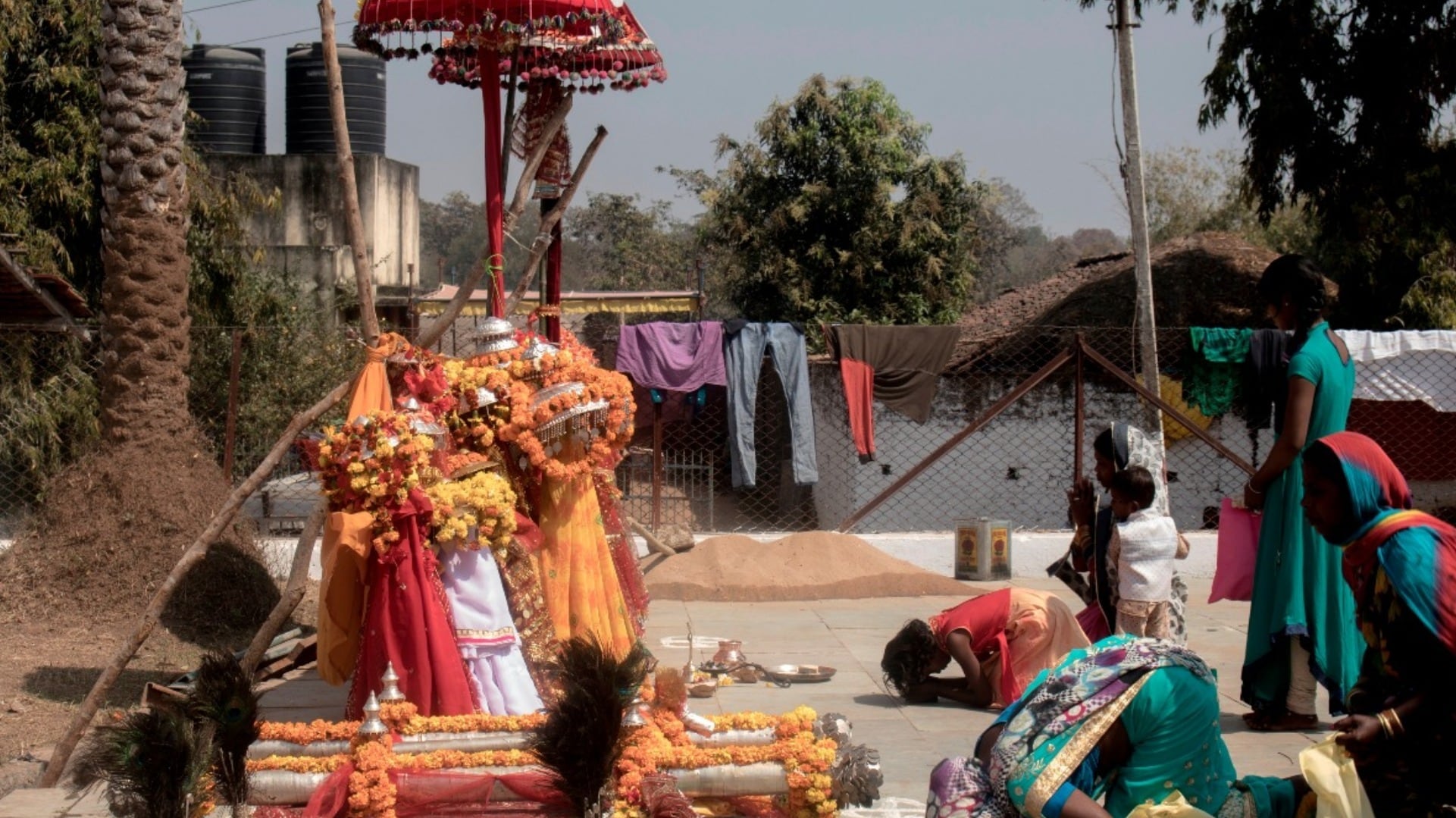 It is a busy time in Dantewada with Phagun Madai, a ten-day long celebration (from 21 February to 3 march, 2018) well into its fifth day, culminating a day after Holi. Madai is one of the two major festivals in this region, the second being Dussehra. Dantewada got its name from the Hindi ‘daant’. It is believed that when Shiva carried Sati’s burnt dead body around the universe (subcontinent), her organs fell at different spots, and her teeth (or tooth), fell in this Chhattisgarh town. The goddess consecrated here — Danteshwari — is the main deity of the Bastar tribals. Whether her provenance was always Hindu is a question for another piece. 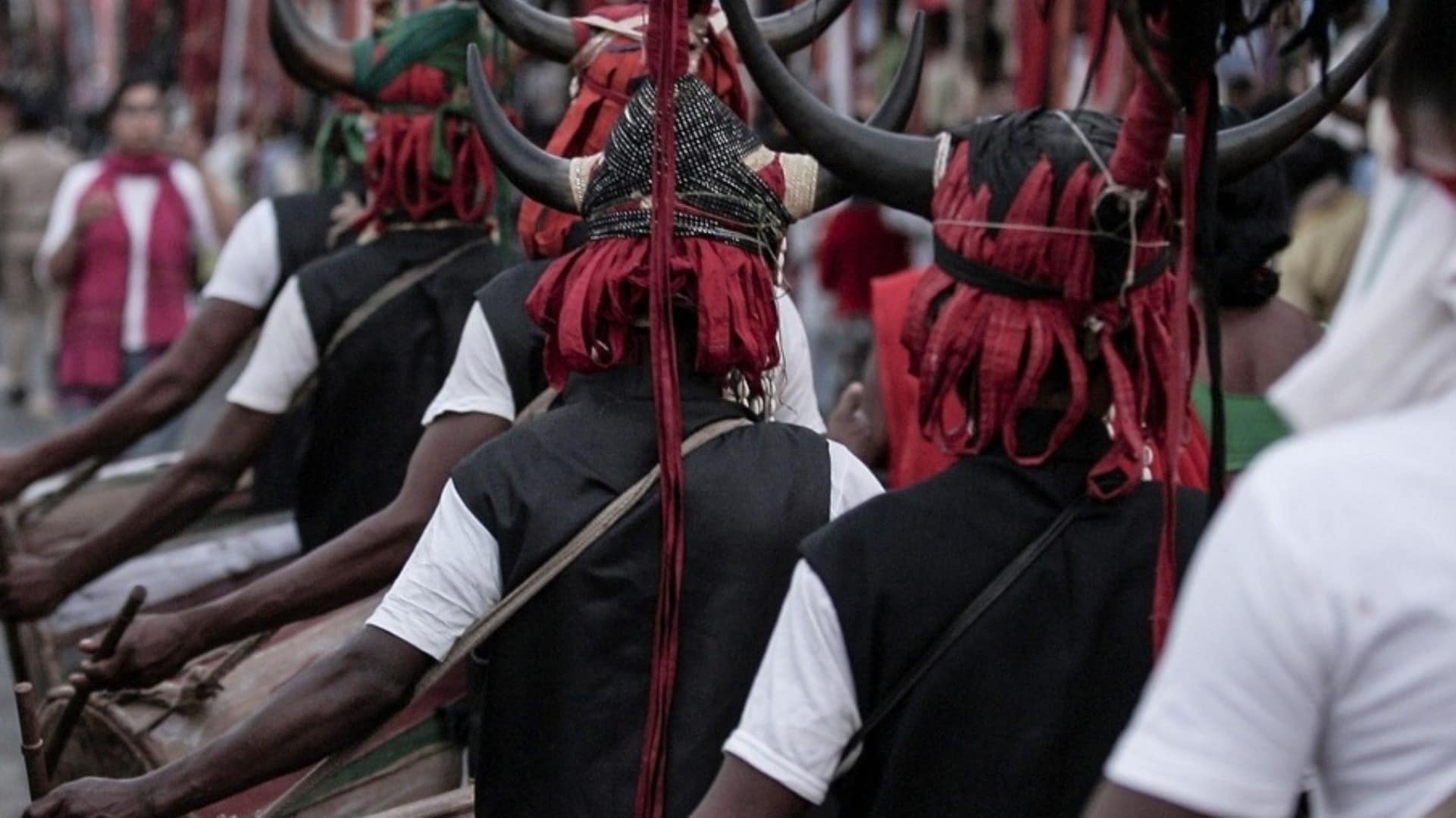 Around the time of Holi each year, the different tribes carry their individual deities, making for over 400 gods, to the Danteshwari temple. The idea is to reunite Danteshwari with her family, and for people to meet each other. Many tribes — Marias, Murias, Abhujmarias, Dhurwa (Parja), Dorla, Bhatra, Halba, and more come together to celebrate the new harvest and spring. On the day of my arrival, the ritual that I am able to attend is the enactment of the hunt of a small deer — Kodarimaar. Two men wearing a sort of loincloth go around with spears, attacking some of the onlookers in jest. The hunters and the audience are quite inebriated by this point, and are quick to break into laughter.

These enactments symbolise the hunting that was traditionally associated with the festival. The first hunt for the festival is the Lamhamaar (rabbit hunt), then the Kodarimaar, Chitalmaar (Chital hunt), and the last and most famous of these is the Ganwarmaar (bison hunt). These take place late into the night. The Kodarimaar takes place at 2 am, the Chitalmaar the next day at 3 am and so on. 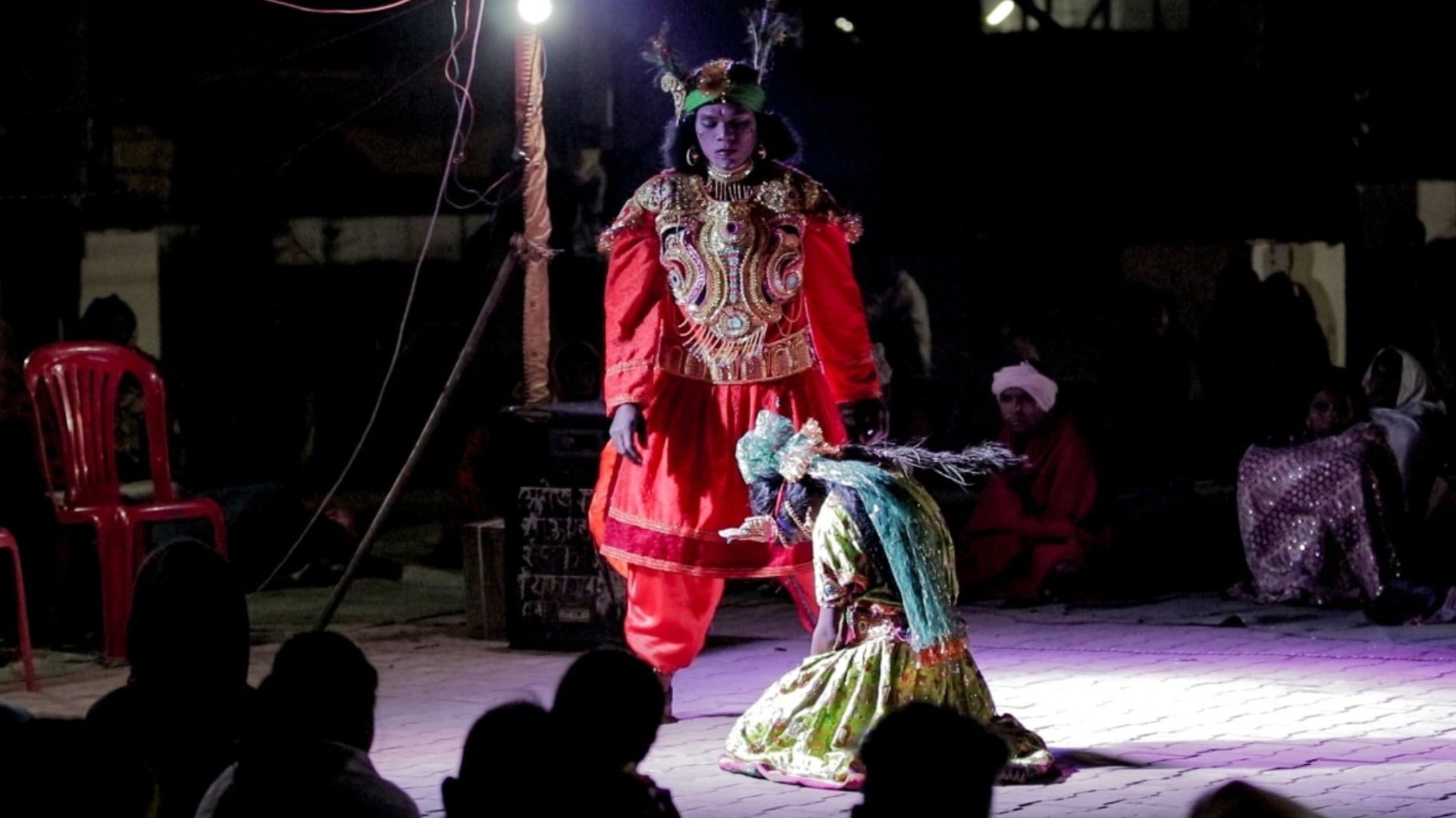 We arrive at the venue, the Narayan temple an hour before the hunt, and end up watching part of a play. Folk theatre also happens to be a big part of the festival it turns out.

Bastar district today is only a part of the original Bastar state as it existed around independence times, that included Dantewada, Kanker, Gadchiroli in Maharashtra, and Odisha’s Nabarangpur and Koraput districts. At Madai, tribes from these regions are present as well, and the folk theatre troupe is from Orissa. 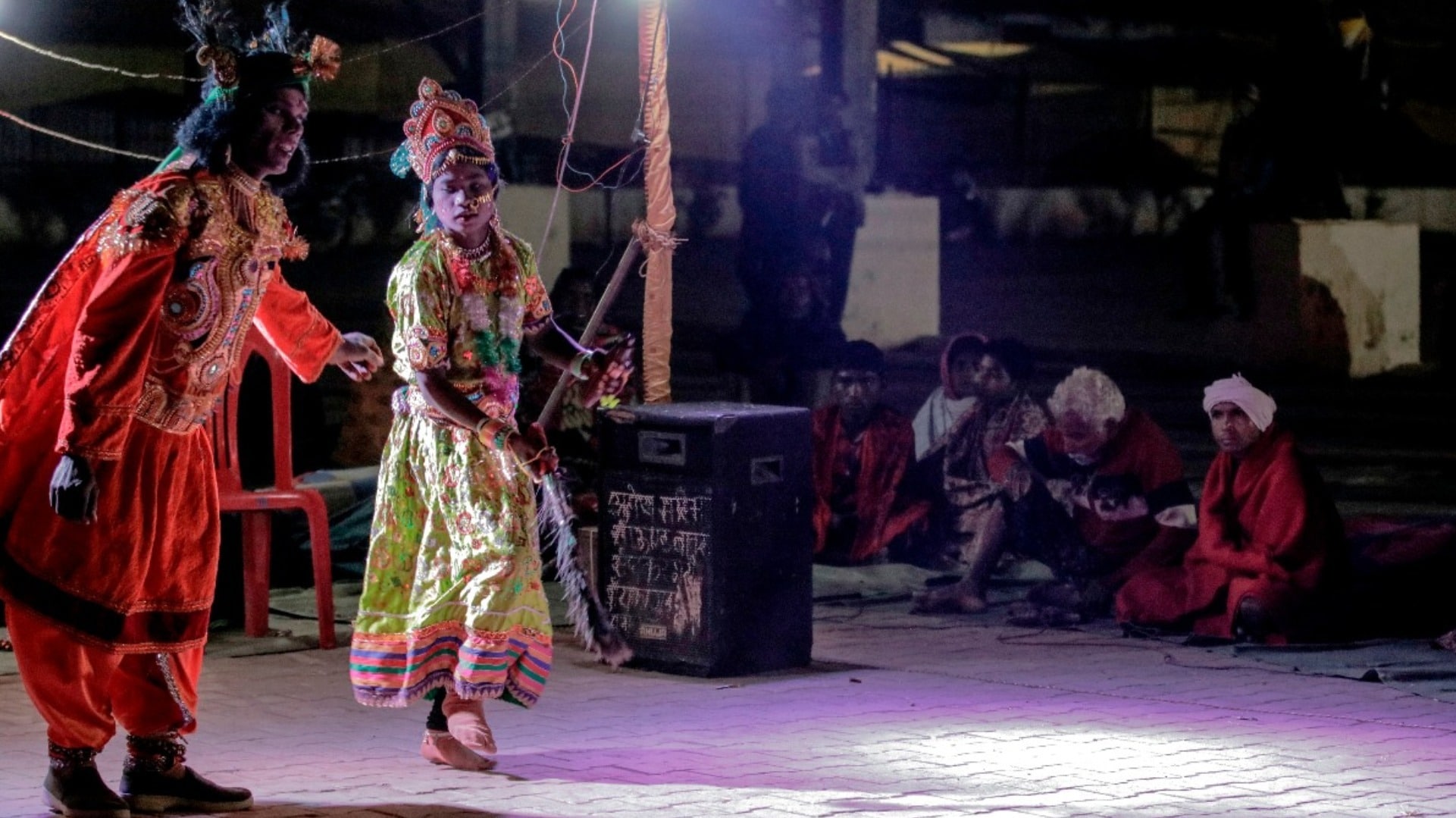 The actors — a woman and man — act out a story from the Ramayana in song. It’s sung out entirely by one man, who sings the woman’s part too, and rather well. The performance continues on through the Kodarimaar, and carries on past it, into dawn, a rapt audience watching. The ritual deer hunt first takes place at the Narayan temple, and then at the Danteshwari temple, ending both times with the bursting of crackers. 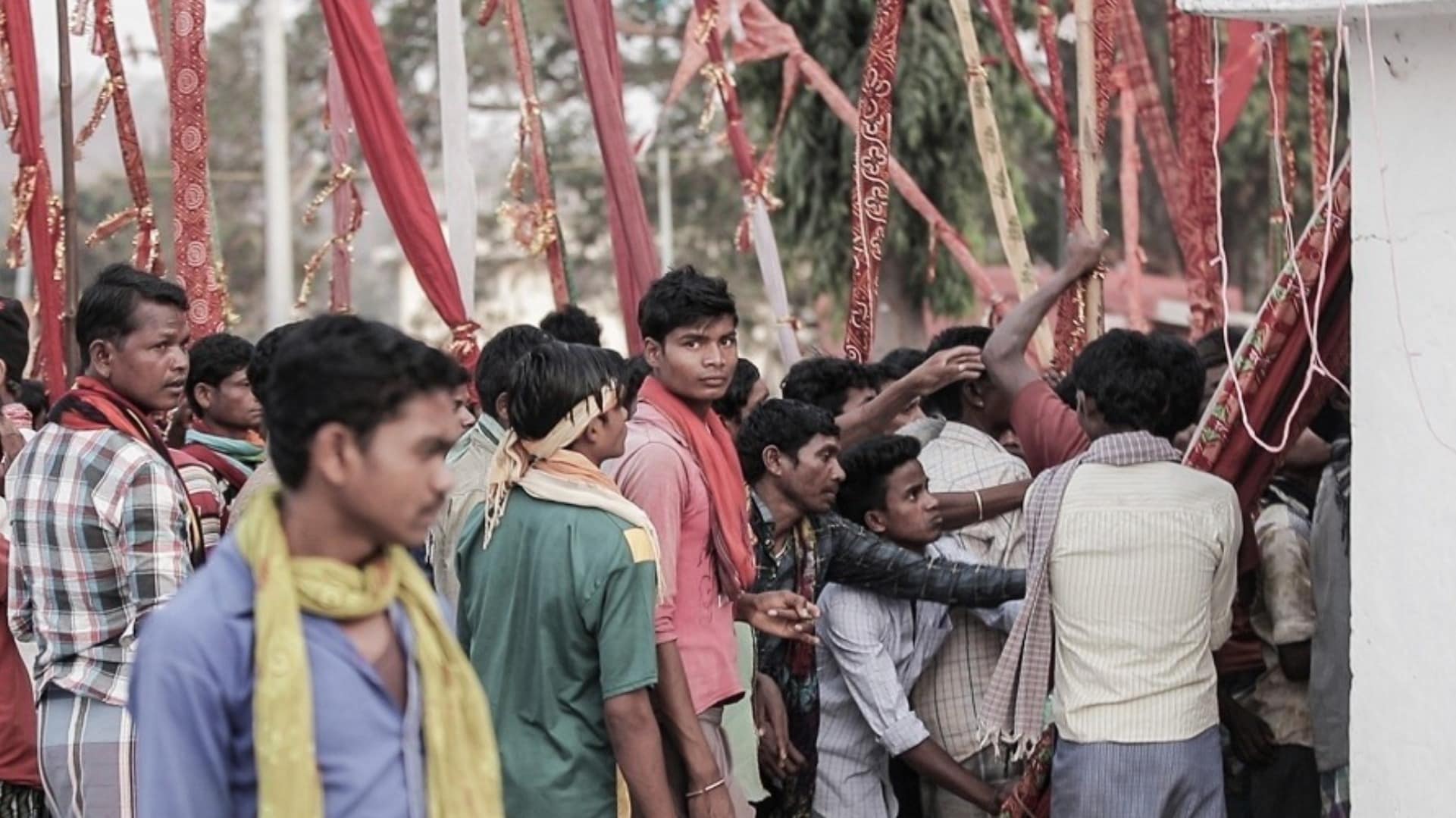 The next evening, we reach the Danteshwari temple to see the beginning of the celebrations that carry on through the night. There are young men sitting all around the temple complex, flags on long poles stacked together, people with cameras setting up in anticipation, musicians sitting on the side playing drums, and a sort of shehnai. CRPF jawans are also present to give a gun salute to the goddess. The music gives way to the ringing of bells, as young men start lining up with the flags, until ultimately the palanquin of the goddess emerges from within the temple and starts making its way to the Narayan temple. As I follow the procession, groups of dancers have emerged from somewhere, dancing to a rhythmic beat.

After reaching the Narayan temple, the march back begins. 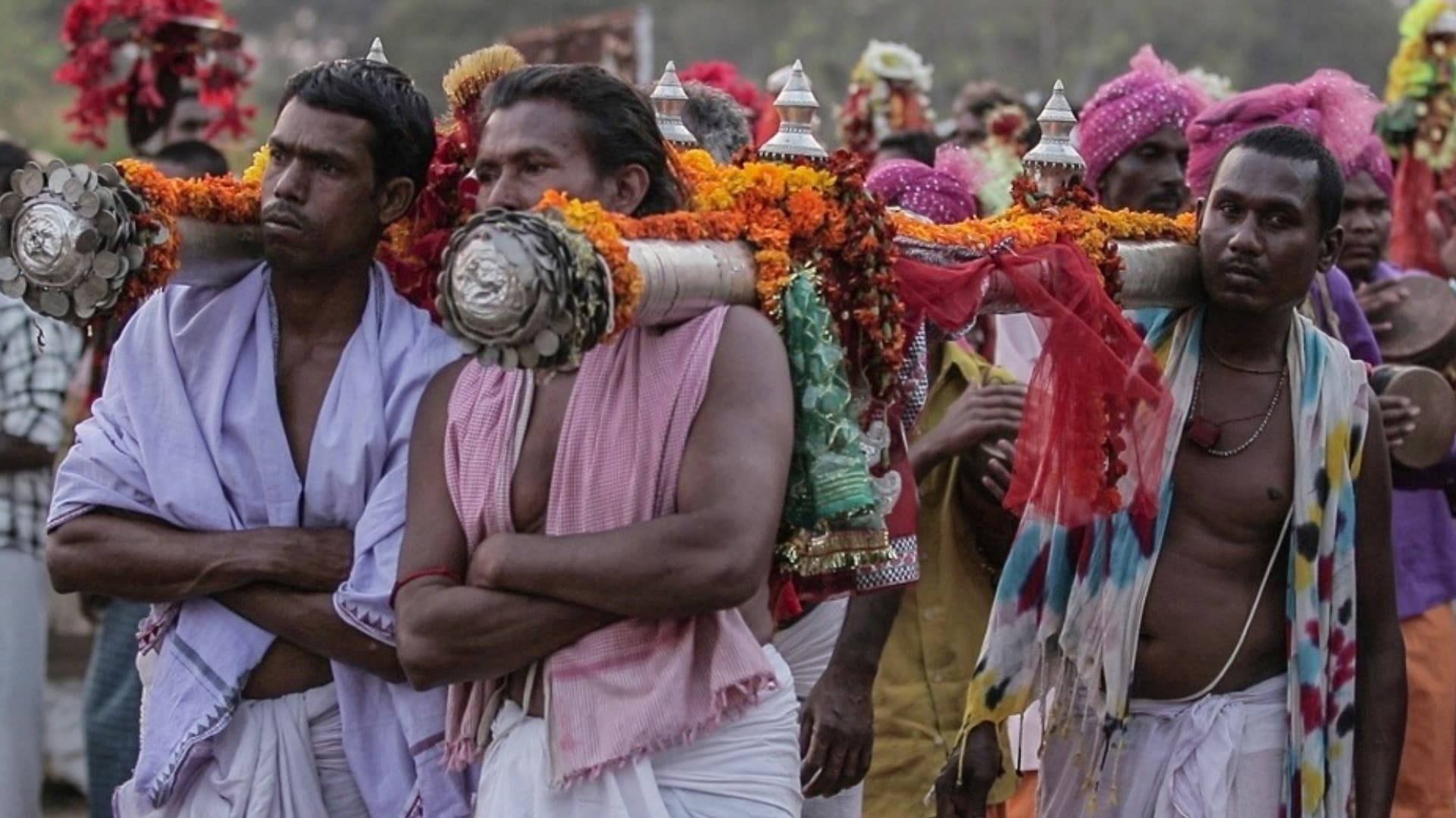 The energy and sheer novelty of this procession are exhilarating. There are different rituals through the nine days of worship, and it’s a sad realisation that I stay only for a sliver of this grand party.

Dantewada does not feature high on travel lists, if it finds any mention at all. The routine reports of violence from the region build upon the idea of it as being an unsafe place. The presence of security personnel isn’t all pervasive, and to my questions about the Naxal threat, I am assured that the violence-prone areas lie in the Sukma and Bijapur districts. My trip ends with an evening of camping near the Chitrakote Falls, India’s widest. It’s not at its lushest in this season, but post-monsoon it’s really quite a force, I’m told. The sound of the gushing water becomes the backdrop to the last night I spend here. And all the while, I am stuck on a poem I read in my Class IX Hindi text book, 'Satpura Ke Ghane Jungle'. It’s a different forest but mentions the festivities around Holi, and the smell of mahua, planting in me a life long desire for mahua, that finally finds fulfillment here.

— All photos by Shubhra Dixit