India, Bangladesh — and the story of three transboundary rivers which no longer sustain life

Dam building and pollution have turned these transboundary rivers into dirty sludge, unable to sustain life

Gurudayal Haldar, 62, has been a fisherman for the past five decades in Balurghat, in the Dakshin Dinajpur district of West Bengal. He depends on the Atreyee River to feed his family. But the environmental degradation caused by rampant pollution and sand mining has virtually sounded the death knell of the river that once served as the lifeline of the district.

“Our ancestors were also in the same business, and the earnings from catching fish were handsome enough to run the family and also have enough for savings. I used to catch around 70-75 kilos of fish everyday and it gave us good returns till a few years ago. But there is hardly any fish in the river now,” Haldar said.

“The dumping of waste from crematoriums, households and lack of administrative action has strangled the livelihood of fishermen who have depended on the river for generations. It is even difficult to earn Rs 100 ($ 1.3) a day, even after toiling for hours in a river that is dying.” 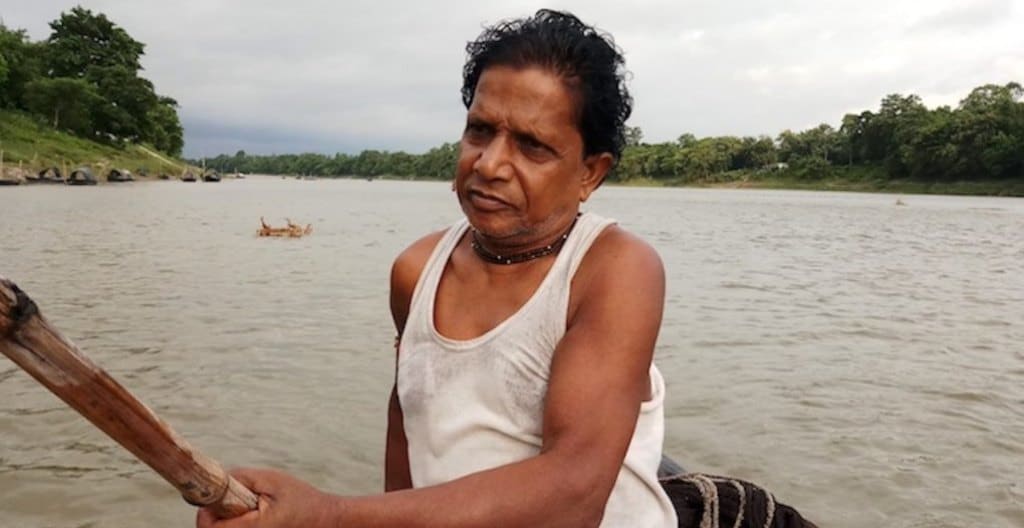 Several hundreds of fishermen in Dakshin Dinajpur have migrated to other parts of the country along with their families in search of better livelihoods. Most of them now work as masons or take on other low-paying jobs to survive.

“We still remember the days when the water was fit for drinking, but now even bathing causes itching all over the body. It is indicative of the level of pollution in the river. It is painful to witness the silent and helpless death of the river,” said Jhantu Halder, a local resident who was visibly upset over the present state of affairs.

The Atreyee River is mentioned in the Mahabharata, one of the two Sanskrit epics of ancient India. Today it is a transboundary river flowing between India and Bangladesh. It originates near Baikanthapur forest in Siliguri and travels 58 kilometres through Dakshin Dinajpur before entering Bangladesh through the Samjhia border in Balurghat. Tuhin Subhra Mondal, an environmentalist based in Balurghat who has been running a campaign to save the Atreyee since 2006, says that climate change has also affected the river. “Climate change has led to an increase in water temperature, impacting the breeding space and growth of flora and fauna in the river,” he said. “Several fish species like Mahasol, Bele and Bagha have become virtually extinct. We have written to various heads of the offices, including the Prime Minister, to look into the issue.”

Pranab Kumar Biswas, founder of the Centre for Mitigation of Climate Change and Global Warming, a non-profit based in Siliguri, points out that a proper study is required to gauge the effects of climate change on rivers and to prevent further damage to the fragile ecosystem: “We have recorded a rise in the temperature since 1990s, which has impacted the aquatic life. Man-animal conflicts are also increasing. Cloudbursts were witnessed in the Teesta basin in June this year,” he said. “The rainfall has become erratic in the past few years and we are losing rainy days in the river basin.”

If the condition of the Atreyee is bad, Mahananda, another transboundary river flowing between India and Bangladesh, is perhaps worse.

This river, which originates in the Himalayas in the Kurseong area of Darjeeling district and descends to the plains near Siliguri, has become a dumping ground for city dwellers.

School children in Balurghat campaigning for the revival of Atreyee River The city generates around 400 tonnes of waste every day, and most of it is dumped untreated into the river because of administrative laxity. Thousands of people have built their cattle sheds along the riverbanks and defecate there. 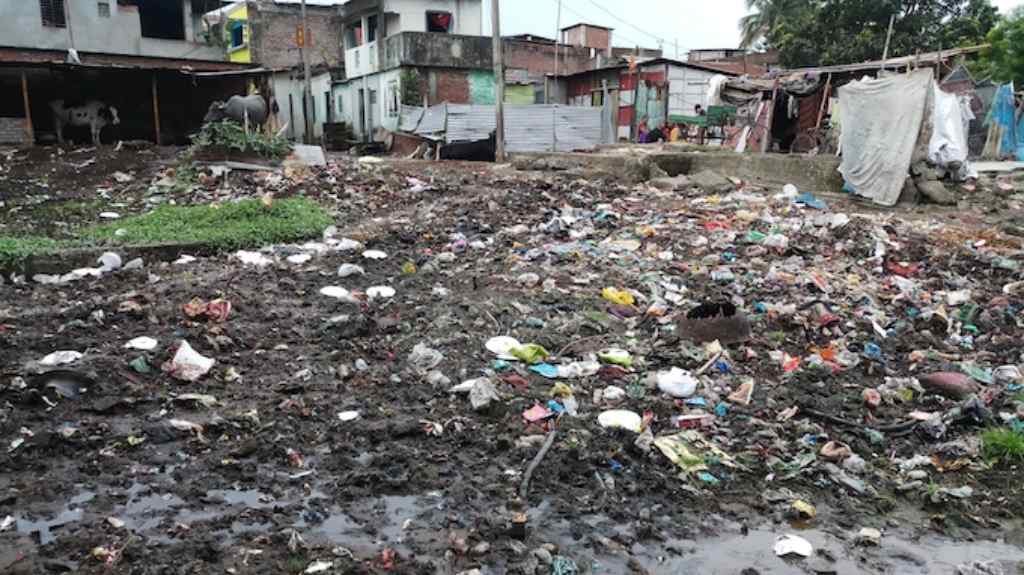 “We call it 'Mahaganda' (extremely dirty) instead of Mahananda," Jyotsna Agarwal, secretary of the Mahananda Bachao Committee, told thethirdpole.net. “Most of the city’s waste, including harmful chemicals, gets dumped in the river. The encroachments on the riverbed have left it dry. We have been running a campaign to save the river since 1994 but the lack of support from the people has dampened our efforts,” she continued. “The situation has reached such an extent that there is no water in the river even during the monsoon.”

Old-timers recall the days when the river used to overflow. “I first came to Siliguri in 1946 and found that the river had ample water with no encroachments. The water was clean and people used to bathe on the bank,” said Jibon Dey, 82, who runs a small hotel in the city. “But it is heart-wrenching to see that it has turned into a drain. People from all walks of life should come together to save the river.”

Sorry state of the Teesta

The transboundary river originates in the Sikkim state of India, flows through West Bengal and then into Bangladesh, covering a distance of 309 kilometres before joining the Brahmaputra.

India has built a barrage on the Teesta at Gojoldoba in the Jalpaiguri district of West Bengal, a little upstream of the point where it enters Bangladesh. The Bangladesh government has a barrage at Doani in Lalmonirhat district before the Teesta joins the Brahmaputra. Both divert water away from the river for irrigation. According to a study by the West Bengal government, due to the dams built for the hydropower projects and the barrages built for irrigation, by the time the Teesta reaches Bangladesh, it has just one-sixteenth of water flow assumed by both Bangladesh and India, as mentioned in the draft Teesta treaty.

In recent years, water volume in the Teesta at Gojoldoba has gone below the 100 cubic metres per second (cumecs) level in peak summer in April and May from an average post-monsoon peak of 3,000 cumecs. The water flow is just a trickle between wide beds of sand, at a time when the water requirement is the highest. Given the situation and the demands for irrigation water – especially by the economically significant tea gardens in the area – the West Bengal government has opposed a plan by the central government to share the water of the Teesta with Bangladesh.

People living close to the river say that aquatic life is being destroyed because of increasing human exploitation. They fear that the barrages are unsafe and could break, causing huge damage during a flood or natural disaster.

“During the monsoon, there used to be ample fish in the water for consumption. But now there are hardly any fish left. The toxic chemicals in the cement used in the construction of hydropower projects have affected the aquatic life,” said Rekha Meena, a resident of Kalimpong. “We fear the occurrence of an Uttarakhand-like catastrophe if there is a cloudburst. A crack on the walls of the dams might also snuff out our lives.”

Experts echo her fears. They say that dam builders have ignored environment-related issues and the risks from earthquakes in a vulnerable region.

“The massive deforestation on both sides of the river, coupled with barrages and dams, have disturbed the ecosystem. The area falls under seismic zone IV and the damage could be massive during an earthquake. Cracks in the dams could cause havoc downstream,” Jatishwar Bharati, a geographer based in Jalpaiguri told thethirdpole.net. “The projects were undertaken keeping all rules at bay, which might prove hazardous in future.”