Until 2017, 28-year-old Sheikh Zafar was one among thousands of Kashmiri youths aspiring to make it through the qualifying exams for the Kashmir Administrative Services, the state level civil service. Then, one cold morning in December, he received a frantic phone call from a friend, informing him about the clearance given by India’s Ministry of Environment, Forests and Climate Change to construct a big dam in the Marwah tehsil (sub-division) of the Kishtwar district.

The 800 megawatt Bursar hydroelectric power project was originally approved in 2000 through an agreement signed between the then Jammu and Kashmir government and India’s Ministry of Power. It was planned on Marusudar, a tributary of the Chenab River.

Chenab is one of the three western rivers of the transboundary Indus basin and under the 1960 India-Pakistan Indus Waters Treaty, its waters are reserved for Pakistan, though upstream India can build dams in the basin as long as it does not reduce the water flowing to Pakistan. The Indian government had ensured that the Bursar project would not violate the treaty. But while the international issues might have been taken care of, for people like Zafar, the nod given by the environment ministry meant an assault on the lives and livelihoods of the people living along the banks of the Marusudar.

Within weeks, he decided — against the wishes of his parents — to discontinue his preparations for the civil services examination. He moved to Chinjer, a village in Marwah, to make people aware people of the disadvantages of constructing such a dam. 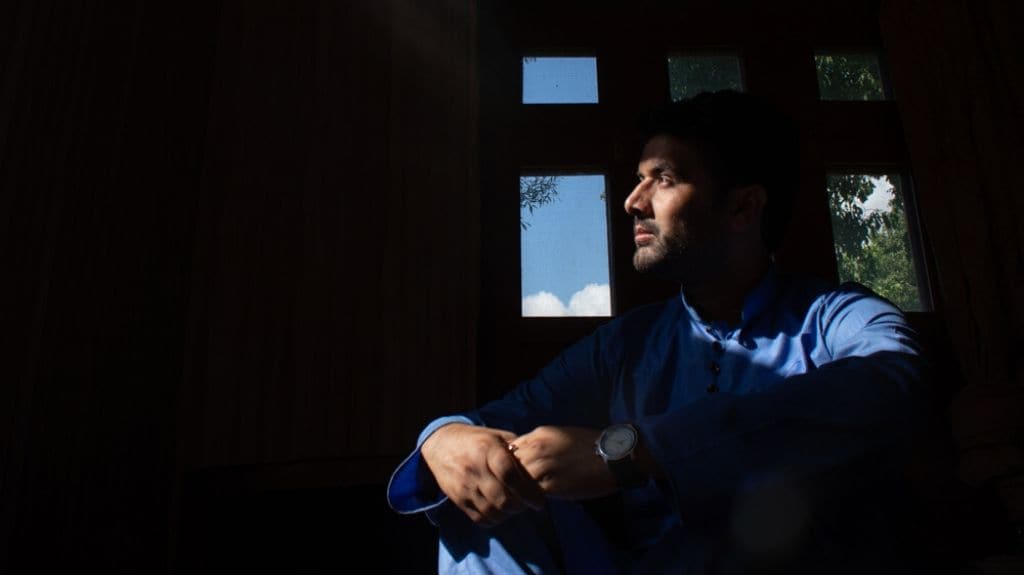 It was a difficult decision for Sheikh Zafar to give up his preparations for the civil service, but the fear of what might happen to his home region was greater. Photo credit: Raqib Naik.

“It was a very hard decision,” recalls Zafar.

He was one of the few from the neglected area who had been studying in Aligarh Muslim University, Uttar Pradesh. “But I couldn’t afford to let my people suffer and that gave me the strength to return.”

Home to nearly 35,000 people, Marwah is one of the remotest parts of Jammu and Kashmir. Tarred roads, mobile connectivity, electricity connections or other basic amenities are luxuries. Horses and ponies remain the primary mode of transport; with candles and kerosene lamps the primary sources of lighting.

There had been some protests against the dam construction plan before 2018 — organised by the elders in a few villages. After Zafar’s arrival in early 2018, the anti-dam sentiment gained momentum.

He launched Marwah Bachao Tehreek (the Save Marwah Movement). He launched Marwah Bachao Tehreek (the Save Marwah Movement).

It brought men, women and children to a single platform with a common aim to resist the construction of the Bursar dam.

“Most of the people in our villages are illiterate,” says Zafar. “And to elicit their support it was necessary to make them aware of the problems associated with constructing dams. This was a daunting task.”

‘Question of our existence’

Zafar started by studying problems associated with constructing hydroelectric projects, in India and abroad. He saw displacement of residents by the projects as the biggest issue. “It results in poverty and a debt trap and is a direct attack on the existence of the people.” To him, this is especially true of people living along the Marusudar, as most of them are farmers who will not know what to do once they lose their farms.

“The majority of those who live in Marwah are farmers. Once you snatch their houses and lands, what are they expected to do? Starve to death at home? And this cycle of poverty as a result of dam induced displacement will also consume the coming generations.”

The government’s Environmental Impact Assessment (EIA) of the Bursar dam estimates that 336 families in seven villages will be displaced altogether, and 1,052 families will be affected overall. It also points out that 1,095 homes, schools, shops, cattle sheds and mosques will be dismantled.

Civil society estimates are higher. Zafar estimates that over 10,000 people (approximately 2,000 families) in 20 villages will be displaced.

The National Hydroelectric Power Corporation (NHPC), the project developer, has an INR 2.11 billion (USD 29.8 Million) rehabilitation and resettlement plan including community and local area development, but Zafar and his associates are not interested. “Our resistance is not for getting a better deal or a good compensation but to force the government to drop its plans to construct the dam altogether,” he said.

The dam also poses a grave threat to the rich flora and fauna of the region including the Kishtwar High Altitude National Park (KHANP). The construction of the dam will lead to cutting of more than a million trees, Zafar alleged.

The project will need 1,779.33 hectares of farms and forests, according to the EIA report, which points out that the removal of vegetation and trees will have a “a negative, direct and permanent impact”.

The Save Marwah Movement has held over 100 protests and hunger strikes over the last two years, both in Marwah and outside the Deputy Commissioner’s office at district headquarters Kishtwar.

In April 2018, Zafar and over two dozen other youths held a relay hunger strike for nearly two months. It was called off after the then Jammu and Kashmir Minister for Power Development Sunil Kumar Sharma visited the area with officials and offered help to resolve the grievances of residents.

A few months later, Zafar and a group of local elders went to New Delhi to meet RK Singh, the Union Power Minister. They submitted a memorandum that sought an assurance from the government to put a permanent halt to the construction of the dam. “I told him clearly that Marwah needs government intervention to meet basic amenities, not dams that threaten our very existence,” Zafar recalled.

A year after that meeting in New Delhi, nothing has changed except growth in the resentment against the Bursar dam. Zafar now plans to reach out to political leaders across party lines, social activists, civil society groups and anti-dam activists from all over India.

The situation has become more complicated after 5 August, when the Indian government rescinded the special status granted to Jammu and Kashmir and turned it from a state into a union territory, with many more powers vested in New Delhi. Since then, reports suggest that the government is quickening the pace of work on various hydroelectric projects, including the Bursar dam.

But Zafar is resolute in his anti-dam stand. “I am ready to fight till the end.”