Amaravati 360: How AP's landless turn penniless in the name of development

The first part of the series gives an umbrella view of the AP government's land acquisition policy and the ensuing friction between local administration and the farmers from whom the state wishes to obtain acreage.

May 9, 2017: On a hot sunny morning when the temperature soars to a little above 40° Celsius, 78-year-old Babu Rao* sits hunched in a plastic chair, with his long bamboo stick for support. He is one of the first to reach the venue of the public meeting in Lingayapalem — one of the villages with a sizeable Dalit population — under the Andhra Pradesh Capital Region Development Authority (AP CRDA) regime, which earmarks the area for the construction of the new capital of the state. Word had gone around that the meeting would start at 10 am, but almost everyone has an inkling that it wouldn't start till 11 am. Yet, a score of marginal farmers from the neighbouring villages reach the venue and wait for over two hours. In September 2014, when the Andhra Pradesh government had announced that a new river-front capital city for the bifurcated state would come up in the well accessible region between Vijayawada and Guntur, right on the banks of the river Krishna, people in both cities had exulted. “Vijayawada, the financial capital of the state, would finally get its due; we look forward to a glittering capital for our children and grand children,” exclaimed an elderly industrialist from the city.

Land is a lucrative investment in this region; these lands yield gold. Farmers typically earn a few lakh rupees per year from cultivating each acre of land, so fertile is this soil. The ancestral inheritance would not only become a contribution to a state cause, but also fetch riches. However, the euphoria did not last long for everybody. In December 2014, the government came up with a land pooling scheme (LPS) and offered compensatory packages to those farmers and landowners in the capital city region if they participated in the scheme. In the days and weeks that followed, it became clear that the announcements meant widely different things for different groups of people. While the elite city dwellers spoke highly of their progressive chief minister, at his élan in handling things, his business acumen, and getting work done, heavyweight landowners from the region kept a circumspect lookout. Land is a lucrative investment in this region; these lands yield gold

For a significant portion of the rural population — small farmers, tenant farmers settled in the region for generations, and landless farm hands or agricultural labourers — the situation changed overnight even though they also had 'compensatory packages' designed for them as per the government’s LPS announcement. After a little over two years of the LPS, touted to be one of the most successful experiments in acquiring private land in recent times, these farmers have woken up to an unpleasant reality. To make sense of these harsh realities, public meetings have become a daily fixture for the farmers and the agricultural population of the region — those who have given off their lands in the LPS and are now regretting the decision, like Babu Rao, and those who are facing mountainous uncertainties concerning their future and livelihoods and continue to cling to their parcels of lands that they feel they cannot do without.

'This land gets us going'

60-year-old Polisetty Rangarao from Undavalli farms on his three-fourth acre (70 cents) of land, where he grows roses, banana, elephant foot yam, and coriander, all year round. He keeps a small portion for next year’s sowing and sells the rest of the produce to earn a minimum of Rs 70,000 per year. His son, a data entry operator in a small private company in the city, helps his father in the fields whenever he can. Rangarao, who has no other source of income, has resisted the land pooling scheme. "Why would we give our land to pooling? The land we have is only 70 cents and on that we live, both me and my wife. We have health problems. I had a heart operation – bypass; we don’t have a pension or anything. This land gets us going," he rues. 70-year-old Sambashiva Rao is in a better position with 4.5 acres of agricultural land, a part of which he has named for his daughter. His married son and his family are also dependent on this land for their daily goings-on. Annually, the family earns around Rs 1.5 lakh per acre after deducting all expenses. Apart from them, ten agricultural labourers work on these fields every day, all year round. And then there are the cattle. A change in land use will throw all these lives in jeopardy, affecting those at the bottom of the prism hard. “It’s all multiple cropping land in this village; even in the rainy season, there will be work for the agriculture labour. That’s the greatness of this village. The soil is alluvial, the water drains easily. The whole community lives like a family in these areas, we all are dependent on each other. The landowners might be compensated when the capital comes up, but what about our livelihoods, our dignity, and of those who are dependent on us. All we have known these years are about crops and plants,” laments Rao.

Sathyavathiamma (50) has been working in the fields ever since she came to this part of the state after her wedding. Her day starts at 3.30 am, when she reaches one of the fields to pick up the jasmine and marigolds. Sathyavathiamma and her daughters work for two hours before sunrise, picking up the flowers; she prides in her nimbleness. For those two hours of work in the work, they earn between Rs 120 and Rs 150. And there is more work for the rest of the day — weeding, cleaning, harvesting, caring for the cattle, though every day is not the same, as she describes her day, the rays of the setting sun glisten her nose ring. Verbal contracts with small farmers and land owners ensure regular work for Sathyavathiamma throughout the season; together her family has earned enough to send the children to school, and marrying off the daughters. Now, it’s only Sathyavathiamma and her aged husband, and a whole lot of uncertainty. “Work has reduced. Look at the barren fields; we used to work in many of these fields, plucking flowers, drumsticks, maize, sorting them, drying them as required. We survived on this soil so far, but many plots have been given away for the capital city. Now we compete with the other farm helps for the little work that’s available. It breaks my heart to see the greenery gone,” she says anxiously, somewhat confused at the entire episode of building houses in a land that feeds people. 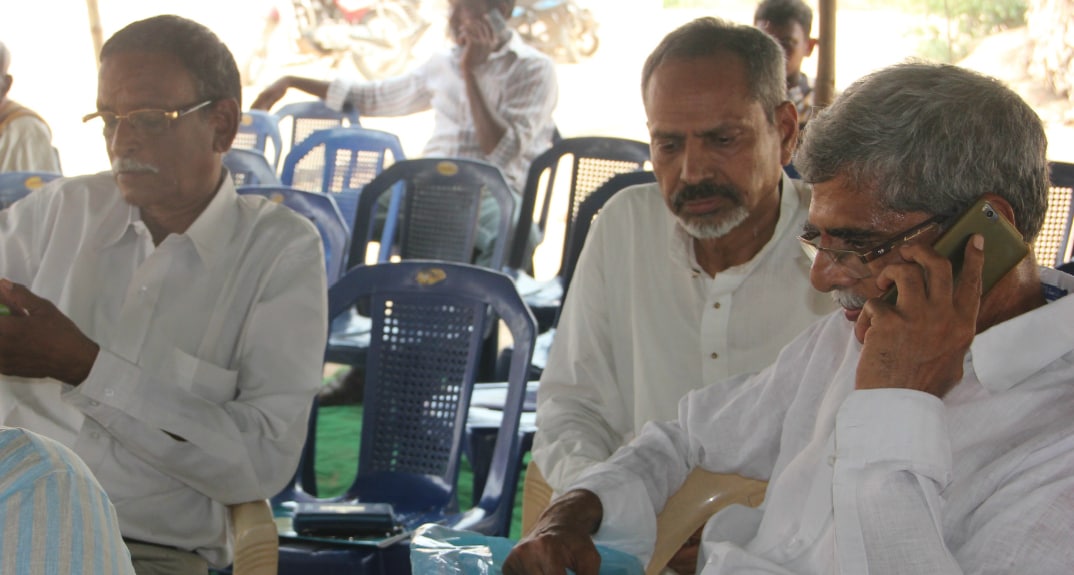 Why should the government waste these useful lands?

Babu Rao signed the irrevocable contract offering his land for pooling after two of his neighbours had their fields vandalised and crops ruined. He now attends every meeting and hears every speaker to see if there’s any hope for him and his family to at least continue cultivating the lands until the compensations arrive or work in the area starts. “For a farmer to see his crop ruined is like watching his offspring harmed. We were all scared. Police patrolled the area for a week, and local leaders visited our villages advising us to give away our lands and maintain peace. Many others like me gave away our lands at that time,” he says. This land in question lies on India’s most fertile stretch – on the banks of the river Krishna, where the monsoons and the associated flooding on the banks is Nature’s way to replenish the rich alluvial soil – that produces 120 varieties of crops, and three to four yields every year.

Manam Bose Reddy, an elderly farmer repents, “Here, we are all small farmers with only 2-5 acres of land each. Around 200 families in this village are dependent on agriculture and 800 families are dependent on work related to farming. People pick flowers that are sent to Chennai, Vishakhapatnam, and Hyderabad – many families are dependent on these simple tasks. From here, drinking water goes to Tenali, Guntur. Why should the government waste these useful lands by constructing a capital here? In the 1994 drought in Hyderabad, when there was no water available, vegetables were sent from this region. This place has never faced drought till now."

Every group and every village has their own problems; their struggles are typical to them, and each is focused to find one’s own, convenient solution.

Babu Rao waits hopefully for the meeting to start, where for the first time, several communist leaders, leaders from the opposition, human rights activists, a former Union Minister, and a former member of the National SC commission are supposed to meet and deliberate on an action plan to counter the government’s move to take lands from these farmers. Even after two years, a united front to resist pooling or acquisition of the rich agricultural lands for concretisation is yet to emerge.

*Babu Rao’s name has been changed.