Haryana's slave brides: For trafficked women, a life lived on the margins

HASINA WAS 14 when she was trafficked from her hometown, Kolkata, to the village of Gurnawat in Haryana. On reaching Gurnawat, she was married off to a man 25 years her senior. Thirty years later, she doesn’t have any recollection of how she was brought to this village, and by whom, nor for how much money she was sold.

Home is a small hut, with no drinking water or electricity. An overflowing gutter and heaps of garbage stand right outside the house, where Hasina has raised her two sons and four daughters near-singlehandedly. Her husband, she explains, is only interested in “daru, juah, sattah (drinking, gambling, betting)” and for years, she has slogged in the fields to make ends meet.

Scraping together all her savings, Hasina got her oldest girl married; the wedding expenses amounted to Rs 5 lakhs, and the dowry included a washing machine, motorcycle and tractor. But Hasina’s son-in-law wasn’t happy, and sent his bride back to her maternal home. He wanted a car, and Hasina hopes that her sons will be able to provide one for their sister’s husband. In this part of Haryana, even the poorest families spend at least a few lakhs on their daughters’ weddings, and the giving of dowry is a commonplace practice.

Hasina’s only friends in the village are Banu, Soni and Farida, who were also trafficked from Kolkata to Gurnawat. Hasina has had a hard life, but she says stoically, “Paro hamesha paraya hoti hai, unka naseeb hi foota hai (A Paro will always remain an outsider, she is ill-fated). ‘Paro’ is a derogatory term used for women like Hasina, trafficked and sold as brides to men in Haryana.

For 10 years now, this has been Chimma’s daily schedule: Cooking three meals a day for the 18 members of her household, cleaning the homestead, feeding the cows, preparing cowdung patties, walking 12 km to fetch wood and wash clothes, toiling in the fields, taking care of the children, and keping her husband “happy” at night.

Chimma hails from Mahendragarh – not too far from Gurnawat. She says that most Paros are subjected to domestic and sexual slavery, but do not speak out because having a roof over their heads and three meals a day is a ‘luxury’ they didn’t have their in their own hometowns.

Years of female infanticide and sex-selective abortions have caused a severe gender imbalance in Haryana. One offshoot of this skewed gender ratio in the state has been a flourishing bride trafficking business.

A field study by the NGO Drishti Stree Adhyayan Prabodhan Kendra found that out of 10,190 households surveyed in Haryana, over 318 of the married women were bought in from other states such as West Bengal, Assam, Orissa, Jharkhand etc. “But this number cannot be close to the truth, given that most families won’t admit to having purchased or trafficked a woman,” says Anjali, a coordinator for Drishti. Another survey by Empower People, an NGO rescuing trafficked brides, found that 1,352 trafficked wives were living with their buyers in 85 villages in north India in 2014.

“We have always had more men than women here, so there are many single men who cannot find women to marry in their own villages,” says Tajbeer Singh, a schoolteacher from Jharjhariawas, explaining how the practice of bride trafficking began.

“When canals and other infrastructural projects were coming up in Haryana, a lot of young women from Orissa and Bengal travelled here, looking for work. Some of them were lured by local boys into marriage, others were bought. The many truck drivers from the region who travel across the country also end up becoming pimps. Sometimes, they tempt impoverished families with money and bring their daughters here as brides. At other times, they cheat the families by promising to find the girls jobs as domestic maids, and then get them married here. The Paro is treated as a maid in most cases. Worse off are the girls who are married to two or more brothers in the same family,” Singh says.

“You can never find a Paro’s grave,” says Parveena, trafficked from her home state of Jharkhand and forced into marriage at the age of 15. Parveena says a local man may often sell his trafficked bride to another man, if he is in need of cash. So a Paro may be sold and resold numerous times. “We are used to it,” Parveena says. “Wherever we go, we have to stay behind the ghoonghat anyway. Men who are poor, diasbled, or widowed, don’t find brides here, so they buy women like me from brokers. Sometimes, when the husband dies, the father-in-law marries the woman. And even if a brother-in-law were to misbehave with a Paro, no one would say a thing,” she adds.

“These traffickers are ruthless brutes,” says Ghausia Khan, an activist from Nuh. “How can they have the heart to bring an innocent 10 or 12-year-old to a new place, knowing well the kind of violence she will be subjected to? I try to help, but there’s only so much I can do.”

Ghausia was trafficked herself – sold at the age of 14, brought from Hyderabad to be married to a man in Haryana. She now runs an NGO that helps victims of domestic and sexual violence find legal, monetary and moral support.

Among the women Ghausia recently helped rescue was Rani.

“Rani was sold at the age of 12 to a man in Nuh, whose first wife couldn’t conceive. Once Rani bore him three children, she was resold to another man. Her new husband assaulted her every single day,” Ghausia recounts grimly. She is unsure if Rani, whose two-year-old daughter was also rescued with her, will ever get over the trauma.

Most of the men in the villages don’t see anything wrong with the practice of bride trafficking. They believe this is a win-win arrangement: the men get wives, the women get food and shelter.

“Men have had multiples wives from historic times, even kings and gods did,” says Bismal, of Akera village. “In previous generations, one woman would take care of 3-4 brothers in a household. That doesn’t happen much anymore. But it is common for most villages to have 15-20 Paros.”

In Haryana’s villages, Paros serve as little more than a maid, a bonded labourer, and at times, a sex slave. She has no agency. Once married, her oppression and abuse is normalised as ‘obligations’ she must fulfill towards her husband and his family. The women become conditioned to believe that marriage legitimises male authority over their bodies and labour, so choose to stay back with their husbands even when rescued and presented the opportunity to go back to their parental homes.

Not all is dismal, however. Programmes such as ‘Beti Bachao Beti Padhao (Save the girl child, educate the girl child)’ launched in 2015, followed by various state-led drives like ‘Aapki Beti-Hamari Beti’(life insurance policy for girl children), ‘Beti Bachao Asha Protsahan’ (monetary benefits for giving birth to girl child)and ‘Sukanya Samridhi Khata Yojana’(saving for girl child’s education) have helped, and the improving sex ratio bears testament. There has also been a systematic crackdown on illegal ultrasound centres and the entire nexus of operation theater assistants, quacks, laboratory technicians and untrained health workers that provided sex-selective abortions. A total of 556 FIRs (First Information Reports) have been registered under the PCPNDT and MTP (Medical Termination of Pregnancy) Act between May 2015 and February 2018.

In 2017, the sex ratio in Haryana was 950 girls against 1,000 boys – the highest in the state in 16 years. Attitudes and behaviours are changing a little as well, with Haryanvi women like Sakshi Malik, Manushi Chillar, the Phogat sisters, Deepa Malik etc breaking through stereotypes and becoming national icons. A social revolution spearheaded by NGOs, women’s rights activists, civil society groups and local leaders, in conjunction with the government’s efforts, will help challenge the deep-seated patriarchal mindset. Only then, will the trafficking of Paros come to an end.

Hasina and her daughters. Hasina was trafficked at the age of 14; she was brought from Kolkata to Gurnawat in Haryana, and made to marry a man 25 years older than her. 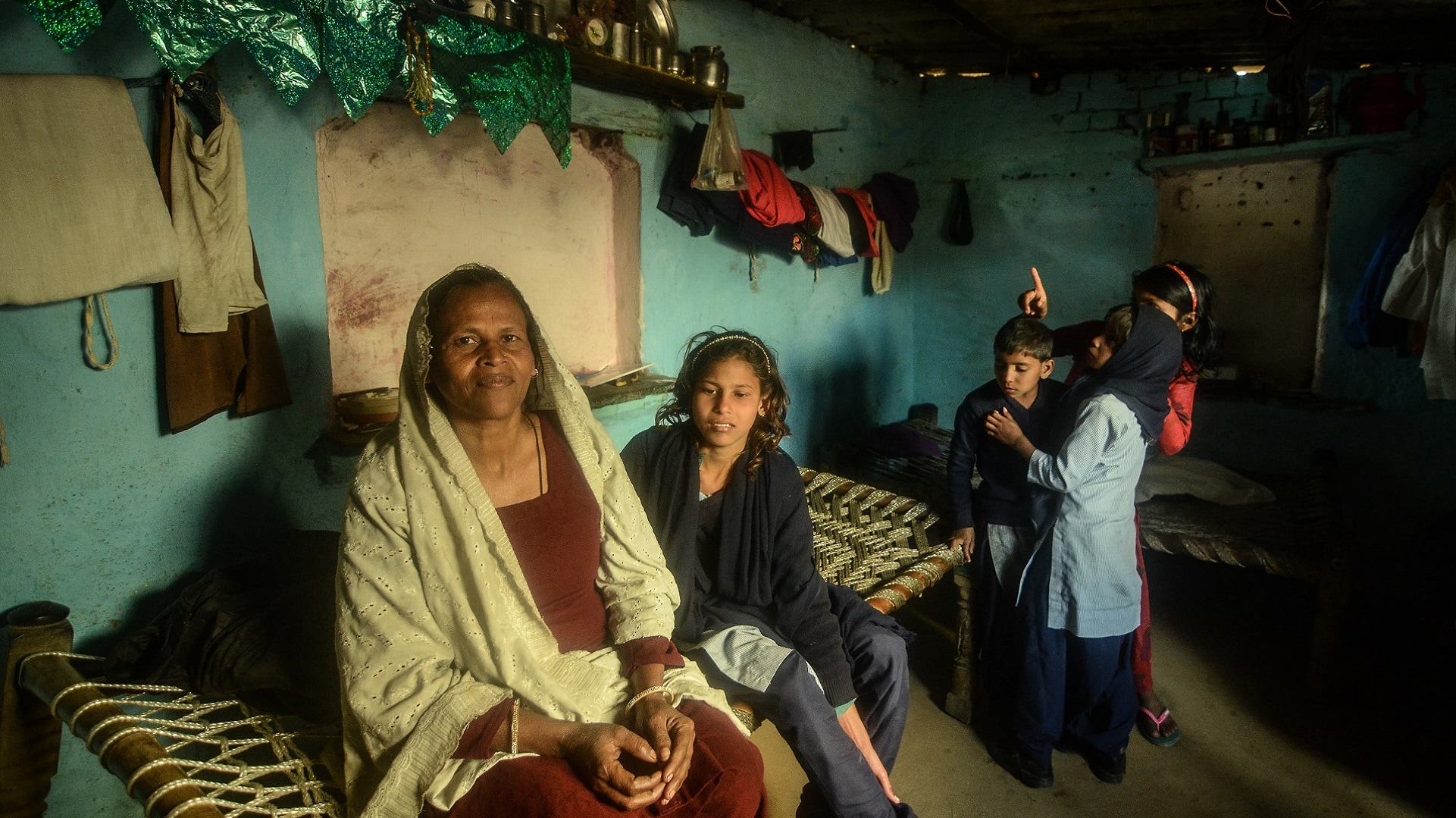 Seema, a Paro, is relegated to the backyard of her house in Mahendragarh to perform domestic chores all day. Seema was sold for a few thousands by her family to a well-known middle man who regularly brought girls from Bihar to Haryana. Many Paros are pushed into unpaid work in the fields by their husband’s family. Ghausia Khan, a trafficking survivor, now runs an NGO to rescue and rehabilitate victims of domestic and sexual violence in Nuh district. A young girl from Akera villages carries wood for cooking on the choolha (mud stove). Daughters of Paros are seldom sent to schools to study. Kattar with his two wives; one of the women is a local, the other is a Paro. 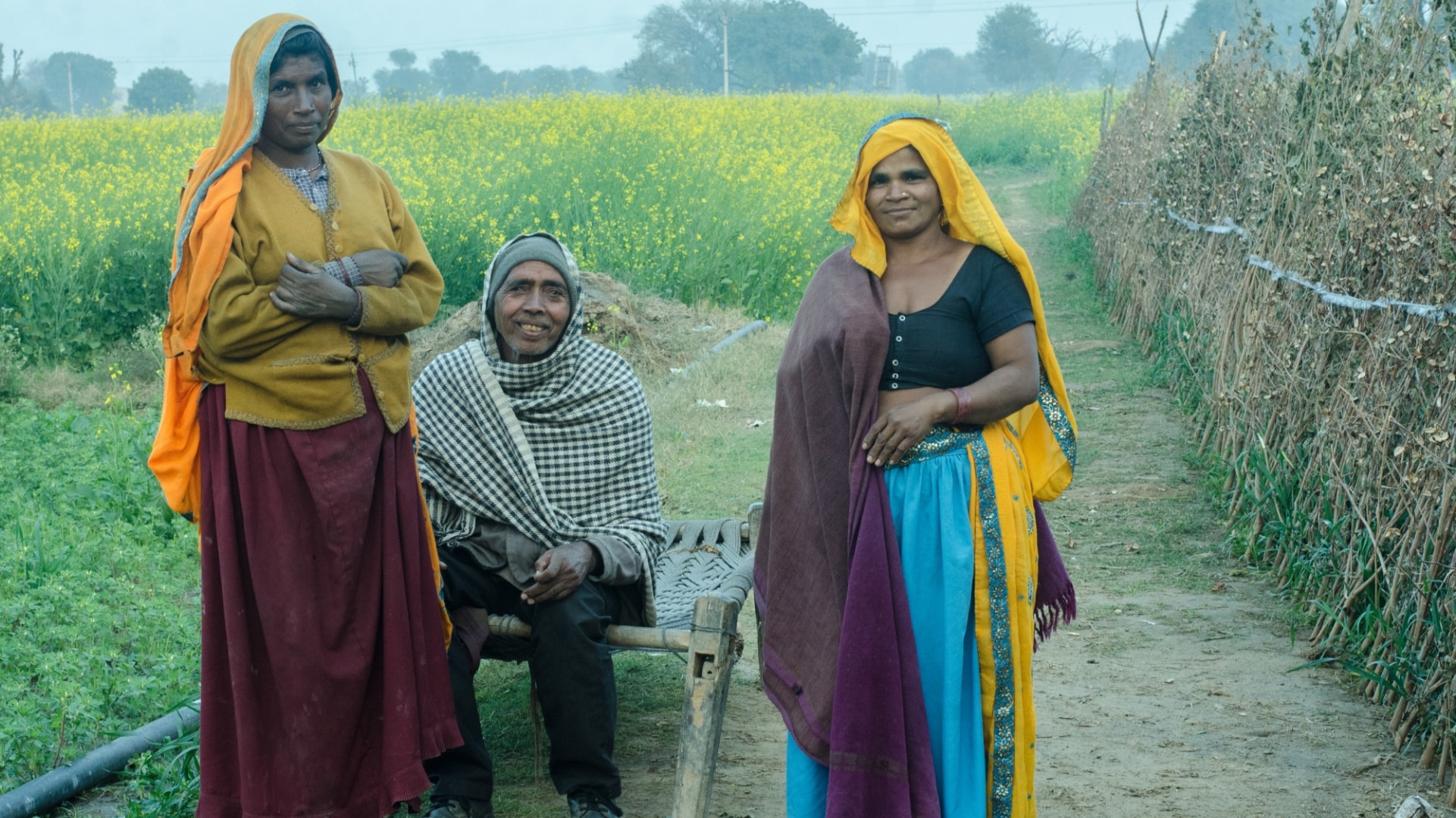 Ritu was sent to Haryana 17 years ago, to work as a domestic maid. She was eventually sold by a middleman to a landless labourer who couldn’t find a bride locally. Bano, with her children and their friends from the neighbourhood. Nuh is one of the most densely populated districts in the country. Two Paros in Mahedragarh village, busy preparing cow dung cakes to be used in the fields as manure. Zaitoon with her children. She was bought from Assam by her uncle, to be married off to a widower in Akera village. Poor, landless, disabled, widowed men are unable to find brides in Haryana. Sayna is married to Basheer, the sarpanch of Gurnawat village. She was brought to Haryana from Assam back in 2005, to be his second wife, so the household chores could managed better. Basheer has six children in all, three from each wife. 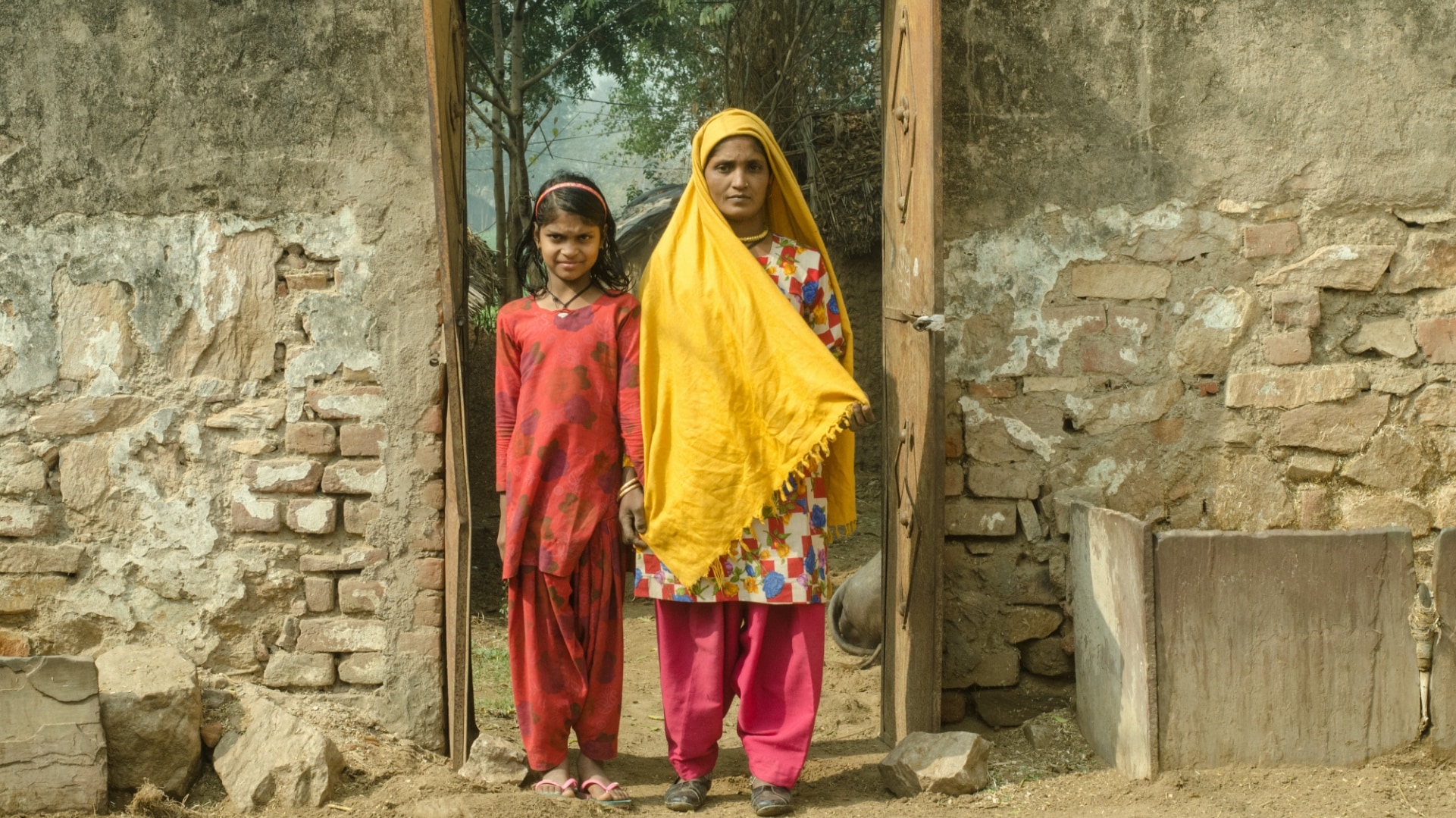 Bano with her husband of 40 years. She was trafficked from ‘Bangladesh’ to Delhi to work as a labourer and was eventually married in Haryana. 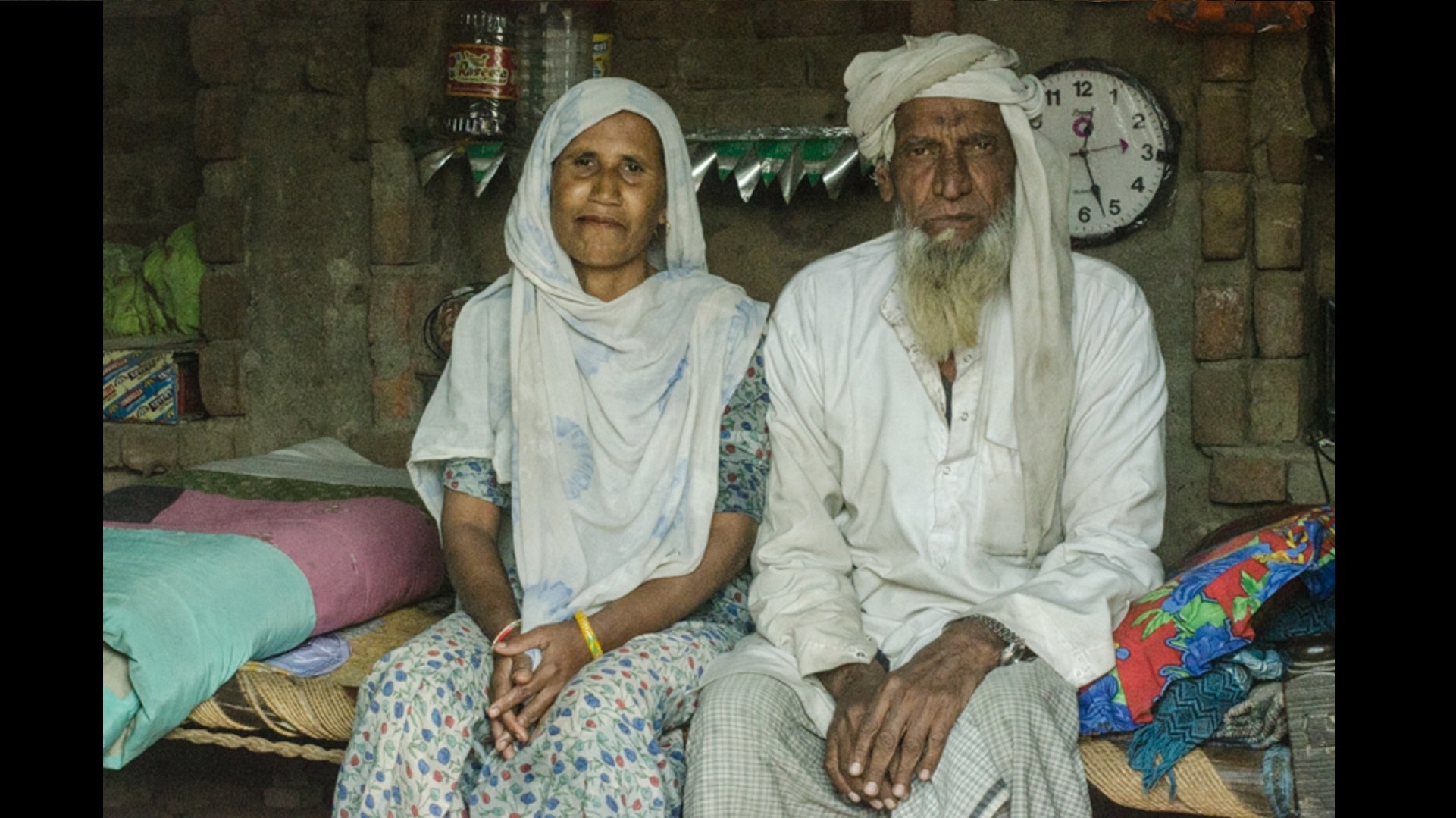 Paros in Gurnawat village carrying materials for makeshift barns for the cows. 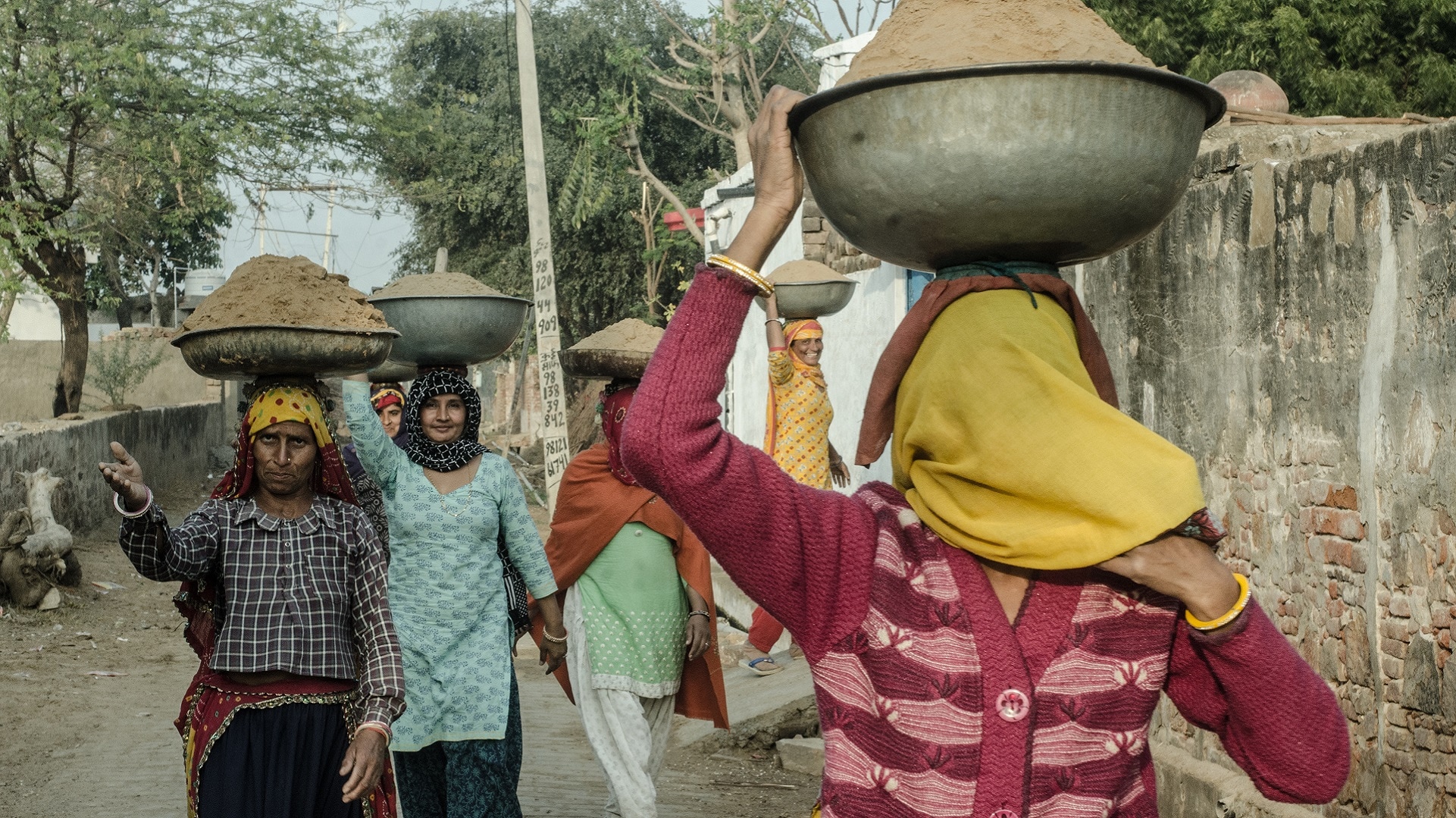 Sanitha’s father, a truck driver from Nagpur who often travelled to Haryana on business, was tempted to earn some money by marrying her off in Haryana rather than paying dowry to get her married in Maharashtra. — Some names have been changed on request. All images courtesy the writer.