Zoya Akhtar was in the midst of shooting Dil Dhadakne Do (2015) — a family drama unfolding on a European cruise — when she came across the music video for ‘Aafat!’ a single by the rapper Naezy aka Naved Shaikh. Shot on an iPad in ‘Bombay 70’ (the pin code for Kurla West, where Naved lived), the rebellion-infused ‘Aafat’ is filled with a fierce, raw energy. Akhtar was hooked.

What followed was an exhaustive and immersive process of understanding the hip-hop subculture of Mumbai’s gullies. Then, Akhtar and long-time collaborator Reema Kagti began writing the script for a film that would become Gully Boy.

Loosely based on the lives of Mumbai rappers Naezy and DIVINE (Vivian Fernandes), Gully Boy tells the story of Murad (played by Ranveer Singh) and his quest for a sense of accomplishment and dignity. “Gully Boy’s journey is not just that of a musician, but also of a person who transcends his circumstances through his art form,” Akhtar told Firstpost.

Zoya Akhtar and Reema Kagti both write in English. To translate the script into Hindi, and more importantly, bring in the authentic ‘Bambaiyya’ language of the streets, they roped in the National Award winning writer (and actor) Vijay Maurya.

Bambaiyya, as used in most Bollywood films, is inauthentic. In reality, the language reflects the cosmopolitan nature of Mumbai itself — being a mix of Marathi, Gujarati, English. “Bollywood has ascribed certain filmi characteristics to the language and the people who might speak that language — they would use phrases like apun, tupun, bol rela hai, ja rela hai, ae shaane, kaan ke neeche du kya; they would wear netted vests; they would apply surma, or snap their fingers while speaking, and would definitely be some kind of gangsters. But this is absolutely wrong... and by generalising this, it becomes a caricature,” said Maurya, who used all his experience living in Mumbai to give Gully Boy’s language a colloquial touch.

It took him a month to write the first draft of the film before showing it to Akhtar. For greater authenticity and accuracy, several Mumbai rappers came on board, including MC Altaf, Kaam Bhaari, Rahul Piske and Emiway Bantai. They suggested certain words/phrases that might be more appropriate to use. “I met the rappers to understand the soul of the language used in the film,” said Maurya, adding that the final draft of Gully Boy was a collaborative effort between him and the rappers.

The way the other characters in the film speak is also invested with realism. “While Ranveer’s character is from Dharavi’s slums and speaks the typical gully language with words like ‘bawa’, ‘bahut hard’ etc, Alia’s uses a more sophisticated form as she comes from a much better background. She is an aspiring medical student and uses Urdu words at home while speaking with her parents; her usual language has more tehzeeb. But, at the same time when she is around Ranveer’s character and his other rapper friends, she speaks the way they do. Similarly, Kalki’s character comes from South Bombay and has a more polished, anglicised accent,” Maurya shared.

Rapper Naezy provided some insight into the language of the underground hip-hop subculture. “This is the language of the streets,” he explained. “At home, we speak a much more ‘tehzeeb-infused’ language. Street slang is our mode of communication when we are with our friends and fans. We connect in that language. But there are certain words which are very specific to certain areas in Mumbai — whether it is Kurla where I live, or JB Nagar, Dharavi, Mankhurd, Kandivali etc.”

FROM SCRIPT TO SCREEN:

Akhtar worked closely with production designer Suzanne Caplan Merwanji; scouting locations, taking photographs of Mumbai’s slums until they found the right setting to represent Murad’s world. They zeroed in on Dharavi, where they finalised as many as 60 different locations (and utilised nearly all of them). “If you see Mumbai’s geography, Dharavi is right at the centre of the city and is a hub of people from an eclectic mix of races, religion, castes, communities and economic strata. That really appealed to us. Dharavi also became a character in itself,” said Merwanji.

Gully Boy showcases the three different worlds Murad inhabits: the slums where he lives; the underground hip-hop and rap scene where he realises his ambitions; and the world outside — filled with glamour, money and abundance — which he is unfamiliar with.

Gully Boy: Notes from the r... by on Scribd

Colour plays an integral part in evoking certain moods and feelings as Gully Boy’s narrative progresses, Merwanji explained. Here’s a look at the colour palettes for the film: 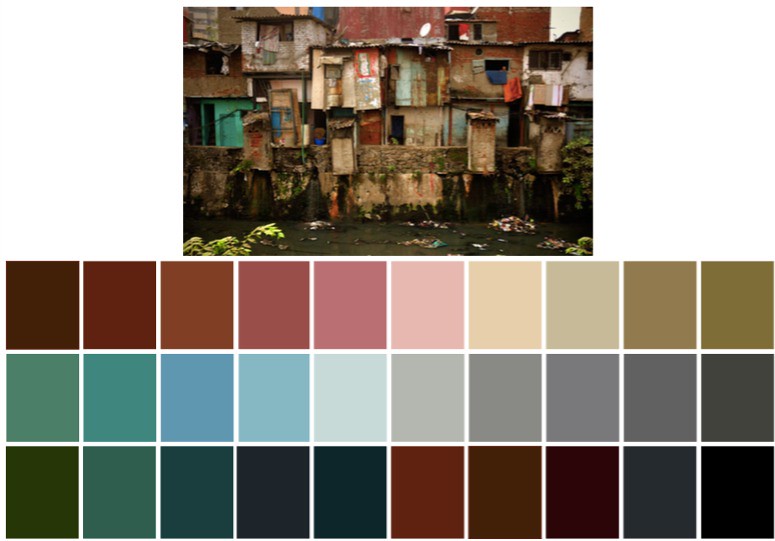 When singer-songwriter Ankur Tewari signed on as the music supervisor for Gully Boy, he knew that his approach to the soundtrack would have to be collaborative. “It was not like hiring somebody to write a song for you. It was about trying to understand the artist, trying to get into their mind, and trying to get the best out of them with what they have,” said Tewari.

Ranveer Singh and Alia Bhatt were slated to play the leads right when Akhtar conceptualised Gully Boy. Getting the rest of the cast together would prove to be a five-month-long process (from November 2017 to March 2018) for Nandini Shrikent, who was joined by another casting director — Karan Mally.

“Zoya’s style of filmmaking, and particularly here in Gully Boy, is such that she has tried to not lose the inherent truth of the environment. She hasn’t cleaned it up; it is not a sanitised vision. Our main challenge was then to find actors who can get that pitch and manage the accent, mannerisms with dignity and authority and not appear like caricatures of characters that Zoya and Reema have written,” Shrikent said.

Shrikent and Mally collated a huge database of rappers — youngsters who were passionate about rap. “We put out a casting call and we got loads of emails, and a lot of people sharing their rap videos. We sifted through these. Ankur Tewari and the entire team of ADs pitched in during the selection process as our focus was on the applicants’ musical talents. The selected ones were then called in for the rap battles that feature in the film,” Shrikent revealed.

Among the Gully Boy cast’s striking additions was Siddhant Chaturvedi, who makes his Bollywood debut with this film. Zoya Akhtar spotted him at the success party for Inside Edge (Excel’s Amazon Prime series). Chaturvedi said he was excited when asked by Akhtar to audition for the movie; but in addition to reading dialogues, he was also required to memorise one of DIVINE or Naezy’s raps. Chaturvedi, recognising just how challenging that would be, chose to write and present rap verses of his own. Having been born and brought up in Mumbai’s Goregaon area, the gully language was not alien to me. So I kind of cracked it,” he explained.

Chaturvedi’s portrayal of MC Sher — fellow rapper and friend to Ranveer’s Murad in Gully Boy — has met with widespread appreciation. Here’s what he told Firstpost:

Naved Shaik, popularly known as Naezy, and Vivian Fernandes aka DIVINE were the inspirations for Gully Boy. While the film does have significant references to their lives, it is not based on them in particular. “The character (Murad) is an imaginary character; it is not a biopic. We cannot show reality if we want to sell a movie. So it was a mutual understanding…to add some elements of fiction in the story. We made the film realistic by sharing our stories, so I think it is a mix of both (the truth and fiction) and it has a good balance,” Naezy said.

Collaborating on the film — from writing lyrics with Javed Akhtar, to helping Ranveer Singh understand the nuances of the gully hip-hop subculture, the shoots in locations that held particular significance to the rappers — was an incredible experience, said DIVINE.

Both DIVINE and Naezy consider Gully Boy an important film for hip-hop artists in India. Where hip-hop in mainstream Bollywood has generally relied on tropes like objectifying women, references to alcohol, partying and money, the ‘asli’ underground hip-hop scene deals with issues and subjects that affect the artists creating it. “We tried holding up a mirror to society, telling everyone this is what our society looks like and this is what happens to us in our everyday lives,” Naezy said.

How Gully Boy will impact the lives of these rap artists remains to be seen. “I don't know what will happen after the film releases. I am curious to see myself,” said DIVINE. “Hip-hop isn’t confined to any one culture, region or language. It’s all about being true to yourself and those around you. You don’t need to be a ‘rapper’ to be part of the movement; you can be a B-Boy, B-Girl, graffiti artist, record producer, DJ — or even work behind the scenes. It’s not just a genre of music, it’s a cultural movement.”

A movement followers of mainstream Hindi cinema will know a lot more of, post-Gully Boy.