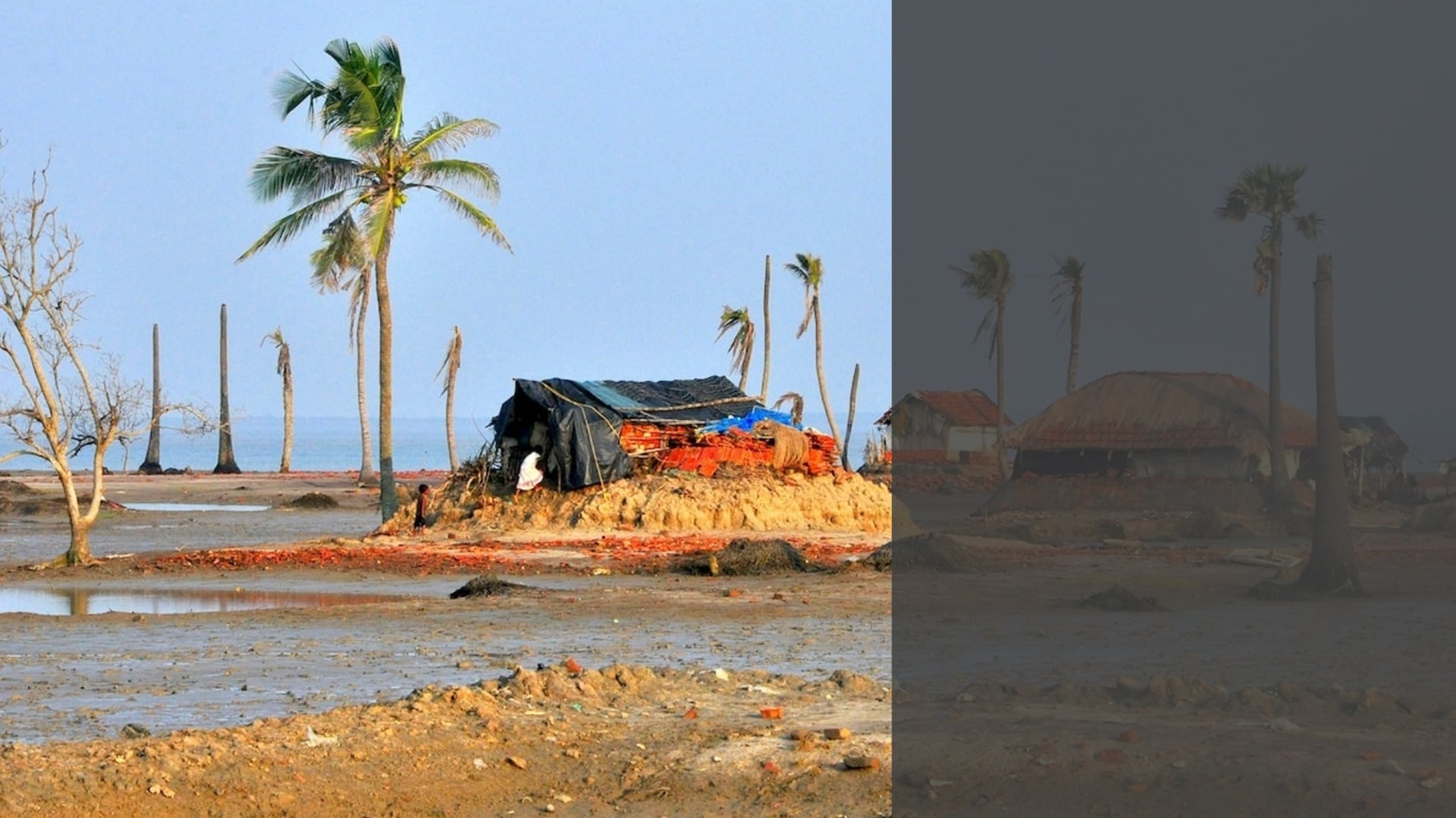 Ghoramara Island: Living on the edge of a rising sea

Ghoramara Island in the Ganga estuary of West Bengal is slowly being submerged by rising sea levels, forcing people to migrate in large numbers.

For people living on the islands in the Ganga estuary, climate change is a demon they battle every day. It has already transformed their lives and livelihood. Nowhere is this clearer than in Sagar administrative block in West Bengal on the edge of the Bay of Bengal. This area is part of the Sundarbans, the world’s largest mangrove ecosystem, and one of the areas most vulnerable to climate change in India.

The Sagar block, which has a population of around 200,000 has to not only grapple with a rising sea level at a rate that is nearly 250 percent higher than global rate (8 mm per year compared with 3.23 mm per year, according to the school of oceanographic studies of Jadavpur University in Kolkata), but also stands exposed to increasing high intensity cyclones and storms. The rising sea has already submerged Lohachara island in Sagar block, eaten nearly three-fourths of Ghoramara island and severely affected the bigger Sagar island.

The story of Ghoramara shows how climate change is changing the way people live — how it divides families, breaks social taboos and hastens forced migration. The largely poor people in the island (45 percent live below the poverty line) are under enormous socioeconomic stress that has upturned their lives. Sagar Island (above) and Ghoramara Island (below) were attached in the early 20th century. By the middle of the century, older people say they could swim across from Ghoramara to Sagar during low tide in a few minutes. Today it takes about 40 minutes to reach Sagar Island from Ghoramara. The gap between the islands has increased mainly due to the rapid erosion in Ghoramara. Ghoramara Island, about 30 km north of the Bay of Bengal, has seen unprecedented erosion in last few decades. From 26 square km, it has shrunk to around 6.7 square km. The erosion has been rapid over the past four decades with about half of the land lost to the Ganga during this period. The population, once around 40,000, is now merely 5,193, according at the 2011 census.

Lohachara, a neighbouring island, has totally vanished. The Khasimara area of Ghoramara is fast disappearing. (Above) Kumed Mondal (in his 80s) and Madhuri Mondal (in her mid-60s), lead a lonely life in a mud house in Ghoramara. Their sons left long ago in search of greener and safer pastures and their daughters are married. "The river was originally far from our house but now it seems to be coming closer every day," Kumed Mandal says. This is the story of most families in Ghoramara,with elderly people or women staying behind to look after the vanishing property and hoping for some compensation from the government. Nilmani Parua lives alone in his two-roomed hut. Parua would have been a sought-after groom anywhere in West Bengal, but not in Ghoramara. Climate change has wrought a curious social upheaval. Boys in Ghoramara struggle to get a wife unless she is from the same island. "Who would get their daughter married into a family that lives on a sinking island such as Ghoramara?" Parua asks. The post office in Ghoramara was the second to be set up in West Bengal, after Kolkata. Once a two-storied building on 36 acres of land, it now occupies a single rented room. "Everything went under the water about 12 years ago and since then we have been working in this rented place," says postman Abhimonyu Mondal. Now the post office closes around midday because there is very little work. "On average, 10 to 12 letters come every day. How much time do you need to dispatch them?" asked postmaster Srikanto Rana. The human exodus outpaces the erosion in Ghoramara. While the island area has shrunk to about one-fourth of its previous size, only one-eighth of the population remains. The mass migration has been triggered because of a loss in livelihoods. Lucrative betel leaf cultivation (pictured above) has taken a beating due to the continuous intrusion of salt water. Increasing salinity has also affected the fisheries, the other major source of livelihood in the area. Many people have migrated to places like Kerala or Chennai to find work. 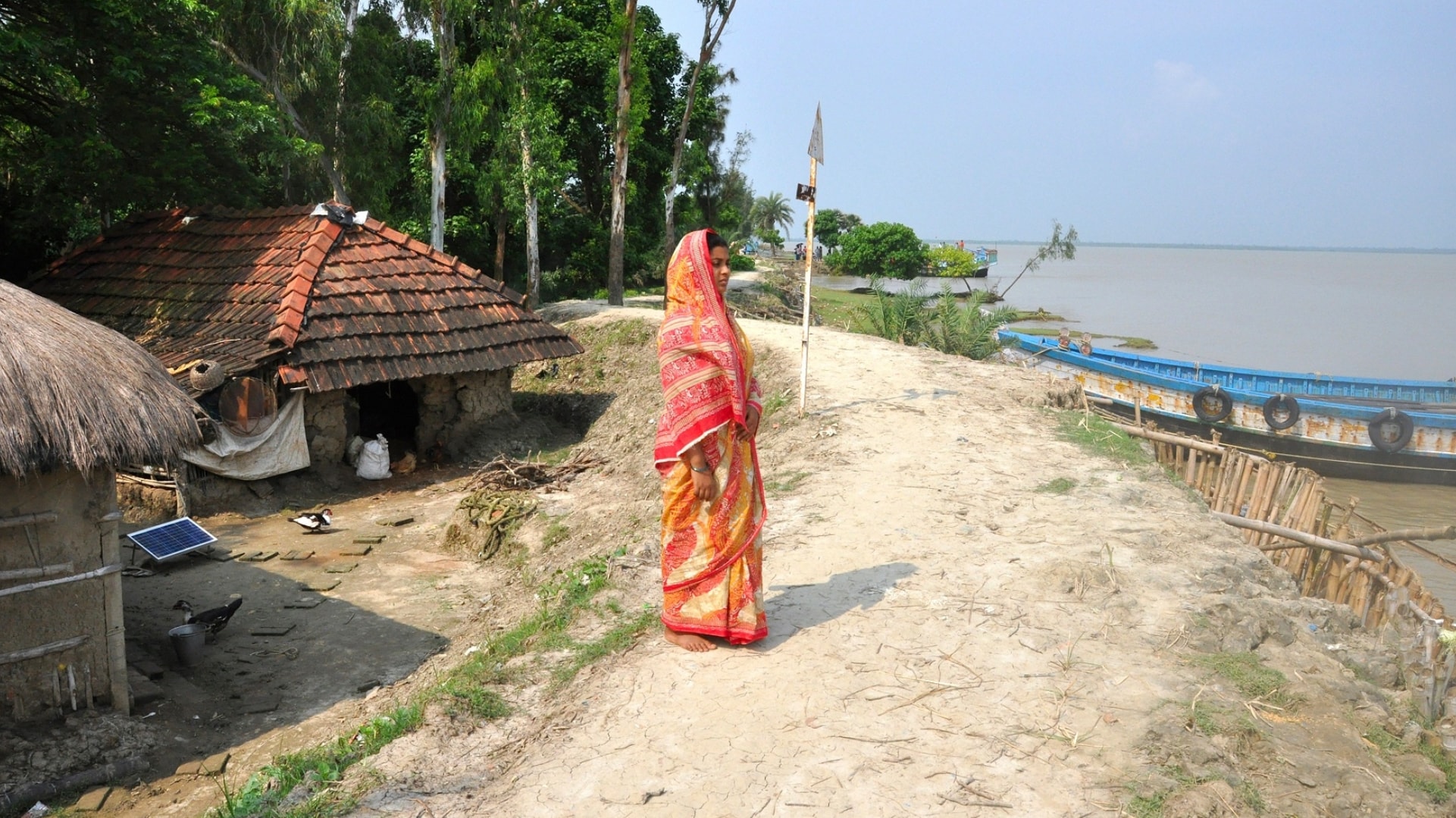 Mamata Bibi married into a family that has been forced by the rising water to change their address five times. Now, the family is looking for a new home, preferably outside Ghoramara, as their present dwelling has come perilously close to the advancing river. "We do not know how long this house will survive. My brother-in-law, his wife and my husband have gone to scout for a piece of land outside Ghoramara," says Mamata. Dhoblat Sibpur in Sagar Island looks like nature is waging a battle against itself. The area by the sea has a few huts barely surviving alongside the trees. "This is our fourth house. Every time during the high tide, we fear being washed away," says Liala Khatoon, tiptoeing carefully in ankle-deep water during low tide. Sheik Istaq (above left) and Sheik Mahmood, now in their 60s, left Ghoramara 45 years ago and live in a resettlement colony within Sagar island, also called Ghoramara. Though life has become safer, it has become more difficult. "We had so much land in Ghoramara. When we were rehabilitated here 45 years ago along with 30 other families uprooted from Ghoramara, each family was given a small piece of land. It has now become extremely difficult make ends meet," Sheik Istaq says. "We still do not have electricity and other facilities which the sons of the soil from Sagar. Ghoramara has been sinking, but there has been an effort delay the inevitable. Local lawmaker Bankim Hazra said he has taken steps to ensure the island still receives development funding from the government. “It’s difficult, but we are trying to stop erosion as far as possible and save whatever is left in Ghoramara,” says Hazra. The poster reads: “We want to save Ghoramara.”

The Third Poleis a multilingual platform dedicated to promoting information and discussion about the Himalayan watershed and the rivers that originate there. All the reports from The Ganga Project were originally published on thethirdpole.netand have been reproduced here with permission.