From Lahore Fort to Lawrence Gardens

In 1970, Rasheed Araeen stood at St. Katharine Docks, near his studio in London, and invited friends to throw 16 fluorescent red discs in the water. It was an exercise in breaking the symmetrical structure of the discs and observing how they created their own random movements in the water.

This performance, titled Chakras, can be considered one of the originating points of Pakistani performance art. Of course, it feels inappropriate to anoint Araeen as the beginning of any canon: his life and artistic practice have been dedicated to destabilising the canons of the art world. As a pioneer of minimalist structure as well as public and performance art, Araeen worked tirelessly against racist and exclusionary art institutions. His performance work, which includes Paki Bastard, where he put on dark glasses and gagged himself, and Burning Ties, where he set fire to a row of red neckties, took on increasingly radical tones. Araeen is not alone in this. The history and practice of public and performance art is intimately tied with transgression and subversion, especially in the Global South.

A worthwhile step in this direction has been taken by the initiative, House, which is a collaborative effort by writers, thinkers, artists and designers to study the relationship between the body and its environments through performative means of expression. The organisers and participants of House set out to explore sites outside of galleries and museums for the production and performance of art in the city of Lahore. The series culminated with a performance inside a suburban house, where many of the performances, which had previously been performed in public, were repeated with slight alterations. By domesticating their work of art in such a direct, forceful way, the performance provided insights into how performances are received differently in public and private settings. According to Natasha Jozi, founder and creative director of House: “A house is a unique communal space which brings together living bodies and objects. Inherently it serves as a fulcrum for initiating dialogue, interactions and shaping identities. You often tend to question, what houses you? Which house do you belong in?”

A house serves as a fulcrum for initiating dialogue, interactions and shaping identities Upon entering the house where the performances were taking place, I immediately came across a woman bound from head to toe in a long, brown rope, the kind often used to secure large packages of cargo. Over the course of the performance, participants untied and tied her again and again, applying the rope to her body in different arrangements and configurations, securing the artist to different walls, sometimes even securing her to the installations of other artists. The haunting, visceral passivity of the performer invited participants to move her, rearrange her, untie her, re-tie her in different styles, and in these ways, change the scope of her mobility. This tension between the interactive openness of the performance and its physical restrictions allowed for a complex, even contradictory, array of meanings to develop: both playful and painful, both unfixed and restricted.

This performance, Abeera Saleem’s Tie Untie, was first performed inside Lawrence Gardens. Abeera tied herself to a tree in this famous, historic park, which is central to the geography and community of Lahore, and attracts hundreds, if not thousands, of visitors on any given day. Lawrence Gardens was first developed in 1863 as part of the modernising and civilising mission of the British colonial forces, which saw the Lahore of Mughals and Sikhs as insular, chaotic, and backwards. Curators were brought from the Kew Gardens in London to give the park an ordered and symmetrical geometry, which was opposed to the organic growth of the older, walled city of Lahore. In fact, the supposed contrast between the order of the new British developments and the chaos of the older parts of the city became an accepted trope, constantly invoked by historians, novelists, tour guides, administrators, and policymakers — in short, the whole gamut of colonial functionaries. This Manichaean division between the good, modern, British section of the city and the bad, backwards, 'native' section of the city is typical of colonial missions in India and Africa. It often masked the reality that the 'native' sector was deliberately underdeveloped, ignored and exploited, not to mention policed and surveilled. The site of Lawrence Gardens is a vital reminder of the way violence is engineered by such hierarchical binaries of colonialism as good/bad, modern/traditional, chaotic/ordered, private/public. Developed soon after the War of Independence, in which Indian sepoys rebelled against their colonial masters, the park was meant to serve as a memento of British superiority, of their ultimate victory in a ruthless campaign that destroyed cities and whole communities. By tying herself to a tree in Lawrence Gardens, a possible descendant of the trees planted by experts from the Kew Garden, but also — at the same time — a local variant, an adaptation, Abeera embodied and performed the binds that keep us attached to the violent histories of colonialism.

It is also crucial to understand that the history of colonialism — at its fundamental core — is a gendered history. The binaries that upheld British colonial efforts were mapped onto gendered bodies. Abeera’s performance doesn’t just center any postcolonial body, but a body identified as female. It is an unapologetic comment on the way these histories are not simply abstract texts or ideas, relegated to an unknowable past, but embodied experiences, painful and vehement, felt and lived every day by gendered and racialised bodies. At the same time, I do not want to limit the interpretation of Abeera’s performance to a narrative of powerlessness. Abeera’s interactive performance also enacts a resistant playfulness, handing over agency to other participants, especially women, who could change the narrative of the performance with their own engagement. As I was leaving the house where the exhibition was taking place, I noticed two women making intricate patterns with the rope and adorning the performer with them. When I asked them what they were doing, they simply responded: “We’re just trying to give her a pretty headdress; make some jewelry.”

Another performance that caught my eye was Abrar Ahmed’s Untitled. Abrar set up nine slates on raised platforms. He drew a grid on each one, like a hashtag sign, using colorful chalks, and invited the participants to play a game of goodkata — similar to Tic-Tac-Toe, but played with ticks and crosses instead of zeros and crosses. In the beginning, the participants played with Abrar, but gradually, the participants began to play by themselves, inviting each other. 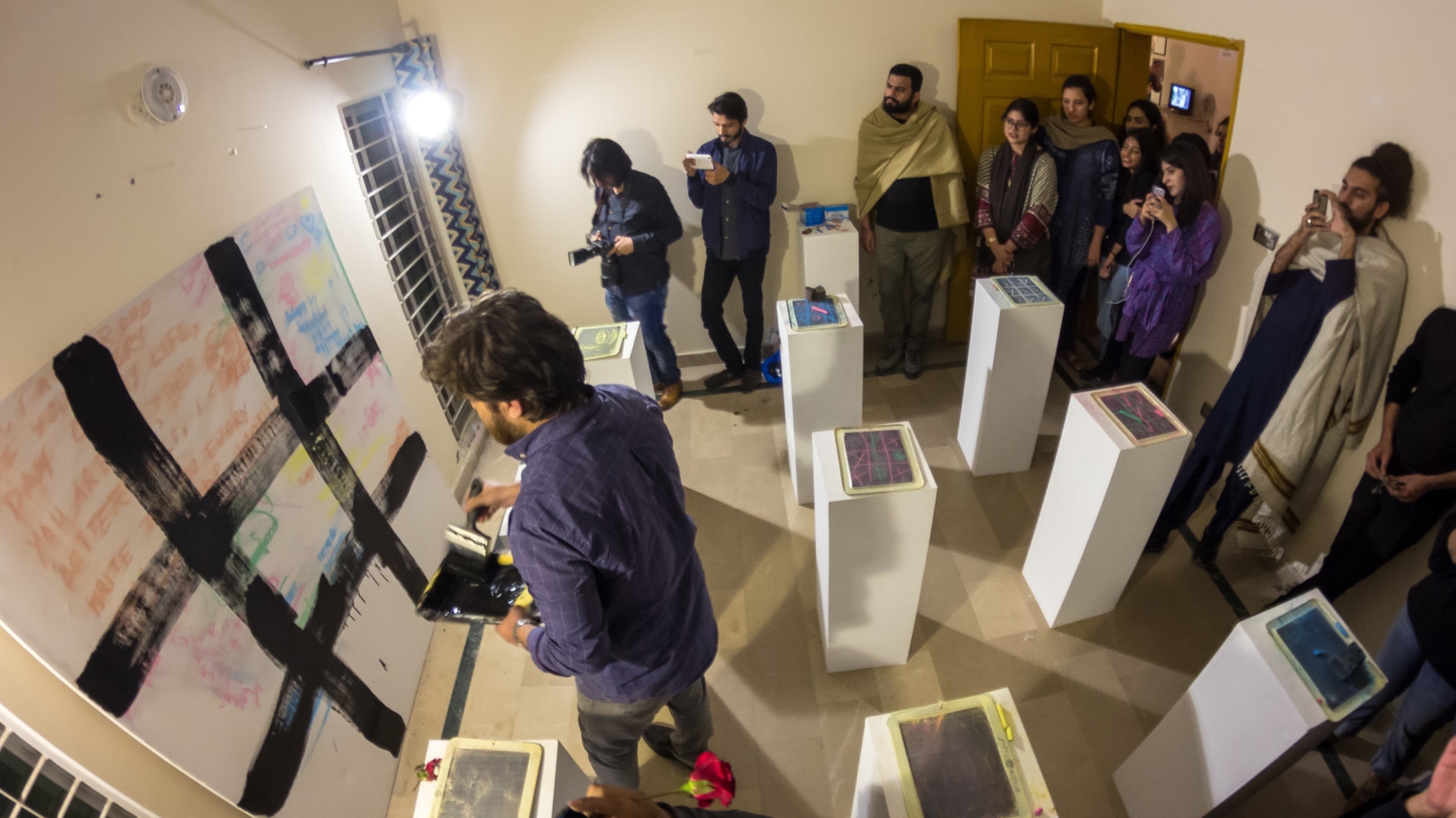 Abrar explained to me that he preferred ticks and crosses because he grew up playing with those symbols in his neighbourhood in Lahore. He wanted to explore how certain supposedly universal signs — specifically, for this performance, the hashtag — are evolving, their historical and semiotic trajectories hybridised by routes of colonialism, capitalism, globalisation, and urbanisation. The invitation to play with the sign within the performance felt like another attempt to explore the semiotic fluidity of the sign. In fact, participants intuitively interacted with the hashtags in multiple ways, drawing and mixing different symbols to create their own games. Some used the sign to express famous Twitter slogans like #BLM. The final game, played with acrylic on a canvas, resulted in ticks and zeros, a curious combination of goodkata and Tic-Tac-Toe: a chance encounter with the syncretism of symbols.

A few days later, Abrar took me to Taxali gate in the walled section of Lahore, where he initially performed the piece by painting the hashtag sign on a public wall. He was interested in the hyperreality of places like Taxali gate, curiously located between fact and collective fictions. The area around Lahore Fort is a place that seems almost unreal, or, we can say, it’s actual reality matters little when faced with all the fictions attached to it. I felt that Taxali gate itself had disappeared under its own narratives and representations. All that was left — even as I walked around the place itself — was a tourist brochure. Abrar’s hashtag, conspicuously announcing itself on a public wall, became a co-conspirator in this game of invisibility, highlighting how our contemporary world often privileges a tidy and accessible virtual reality over the complexities of centuries-old cultures.

On our way back, we came across Lahore Fort Food Street. The space has been recently gentrified to attract tourism in the area, with no efforts to confront any of the various economic, political, and social problems afflicting the surrounding communities. And what did we find at the very entrance of the Food Street? A big hashtag sign, proclaiming #LOVE LAHORE, the o’s in love and Lahore substituted with Pepsi’s round logo. Reality, unfortunately, really was disappearing. 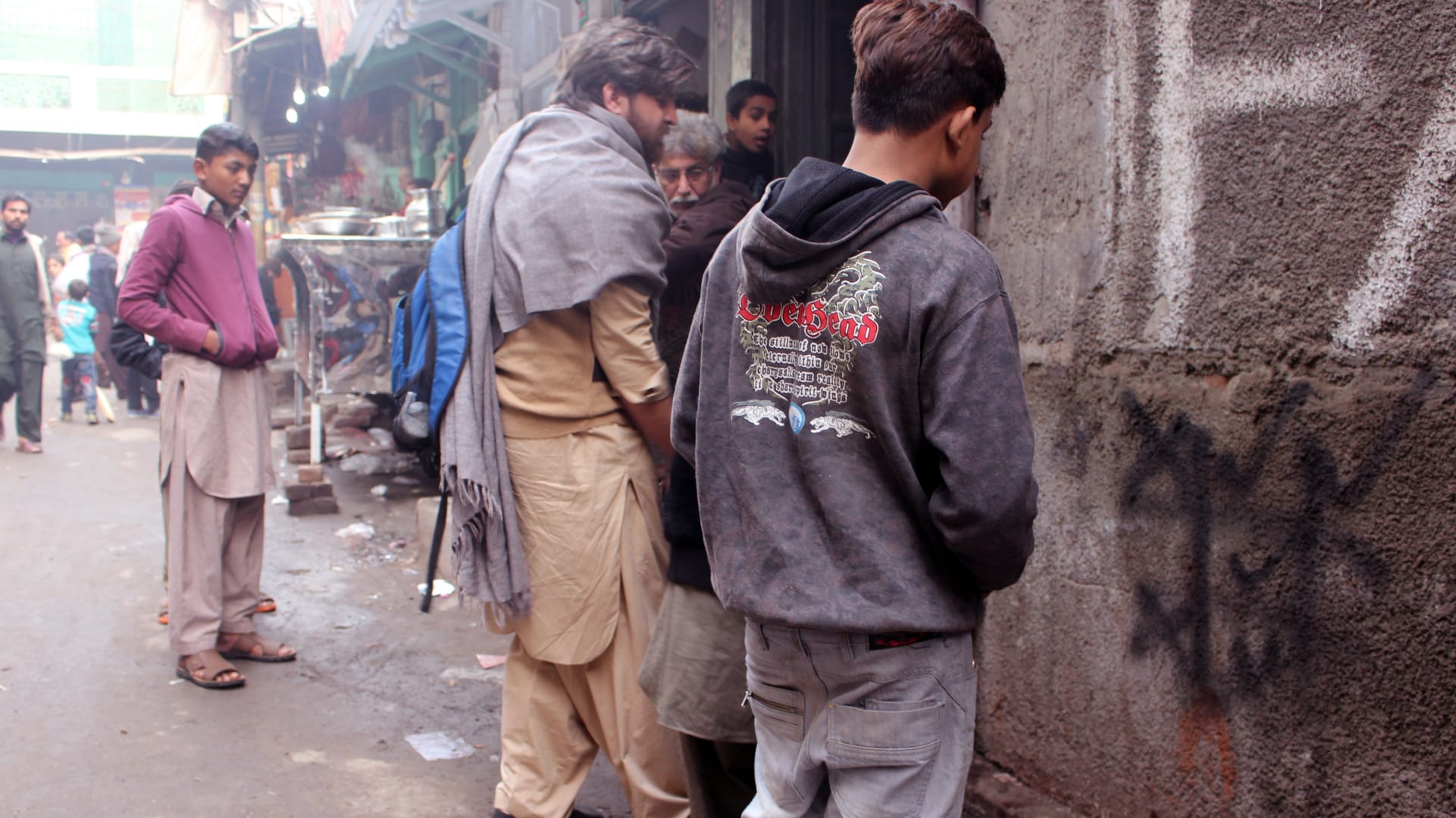 People inside the Food Street sat on the rooftops of old havelis, looking around at even older neighbourhoods, concocting aerial fantasies from a safe distance without stepping into the streets. As I walked, feeling myself part of a modern, developing city, observing neighbourhoods designated as “antique” and “traditional,” I was reminded of the colonial juxtaposition between the new, ordered Lawrence Gardens and the old, chaotic areas around Lahore Fort. It was easy to see in that moment how colonial and patriarchal binaries continue to inform our ideas and policies, interminably repeating their violence.

Note: House intends to engage creative practitioners to investigate performance and how it creates and transforms the body. House has worked with over 25 artists under the House Artist Residency from Karachi, Lahore, Rawalpindi, Islamabad and Lahore. You can find details about House on their website.

A version of this article originally appeared in Dawn. Republished with permission.

Haider Shahbaz has a degree in History from Yale University. He currently lives in Lahore and teaches at FC College. His reviews have appeared in Jadaliyya, Los Angeles Review of Books, Himal Southasian, and elsewhere. His translation of Mirza Athar Baig's Urdu novel Hassan Ki Soorat-e-Haal is forthcoming from HarperCollins India.