For Jaisalmer's camel owners, an uncertain future brought on by economics of change

The old tradition of breeding and herding camels, and using them as carriers for short distances for tourism, remains one of the primary professions for villagers around Jaisalmer. But changing fortunes have imperiled their livelihood.

Jaisalmer. 3 pm. The sun is still high, and a group of camel owners are waiting for tourists at Sam Dunes, one of the most popular spots to see the sun set over the desert. The peak tourist season hasn’t started yet, but most of the camel owners had a booking today, as a bus-full of schoolchildren was expected in an hour.

As a caravan of speeding jeeps passes the camel owners, one among them — Metha Khan — remarks, “Now people prefer these fast-paced jeeps. No one is keen on a slow camel ride anymore.”

The rising numbers of jeep safaris has certainly affected the business for camel safaris, and those who can afford to, have sold their animals and purchased vehicles. The age-old tradition of breeding camels is dying out, and tourism will not be enough to save it.

Dilbar Khan (above image, left) says incomes have fallen so low that they’re faced with a choice of “whether we should feed our children or the camels”. In the tourist season, a camel owner can earn up to Rs 800 a day. But the season lasts only three months, from November to February every year. The cost of maintaining (including food and water for) a single camel is about Rs 300-350 per day, throughout the year.

As Khan speaks, a group of children race, thrilling the tourists. Most of their income depends upon tips from clients; they receive only Rs 100-150 from the resort owner per trip.

The next day, in the vast deserted land of Thar, I came across Bachal Khan. Bachal lives in a small settlement known as ‘Lakhmano ki basti’, not too far from Sam Dunes. Starting from a young age, Bachak has now been working with a resort for the past 10 years. His day begins at 3 am, preparing the camels for a ride at sunrise, and he works late into the night. After years of grueling work, he decided to buy a camel and be his own boss. “I now have the freedom to work the way I want to work. Having my own camel is a dream come true,” he says.

Also on Firstpost: Kutch's Kharai breed, the world's only swimming camels, battle the tide of an uncertain future

However, along with the freedom came the realisation that the cost of owning a camel was greater than his annual earnings. Some in the village share the expense of buying fodder, which is sourced from Bikaner. As rain water is not sufficient to provide for the camels throughout the year, two or three times a week, they get a water tanker.

Bachal Khan’s father died of cancer, and the family had neither money nor the resources to afford his treatment. “Despite all his hard work, my father died poor. Now I am the one who is carrying this profession further.  There is no other work I can possibly do. I have bought this camel, but I fear that I might have to sell it soon. And nowadays, the cost of reselling is just nothing,” Khan tells me.

The Pushkar Fair is one of the largest events of its kind, for the buying and selling of camels. Over the past decade, however, the market has slowed down.

As per an Economic Times report, there has been a decline in the overall camel population as the utility of the animals as beasts of burden has reduced. In 1991, India had the seventh largest camel population in the world, with over 10 lakh animals. Now, there are just 2.5 lakh left.

The community of camel owners lives in stark poverty. Many of their villages still lack basic amenities such as schools, medical care facilities, access to clean water.

Ilse Köhler -Rollefson, an animal lover, researcher and activist, advocates the marketing of camel milk as a way to improve the lot of the owners and the animals. The first camel milk center has opened close to Bikaner. However, much more is needed from the government before the community’s issues are addressed.

(Above) A group of boys is seen during their school’s mid-day break. For the families of camel herders, their main education is in knowing how to breed and herd camels. Children quit school at a young age to join the profession. Bilal, 11, is one such child.

To ensure a secure future for the younger generation, in 2016, the government of Rajasthan launched a scheme to protect the camel and camel herders. Under the Ushtra Vikas Yojana (Camel Development Plan), the government will now provide Rs10,000 as a cash incentive to camel herders on the birth of each calf. While positive, the move has not impacted the camel owners’ lives overmuch. 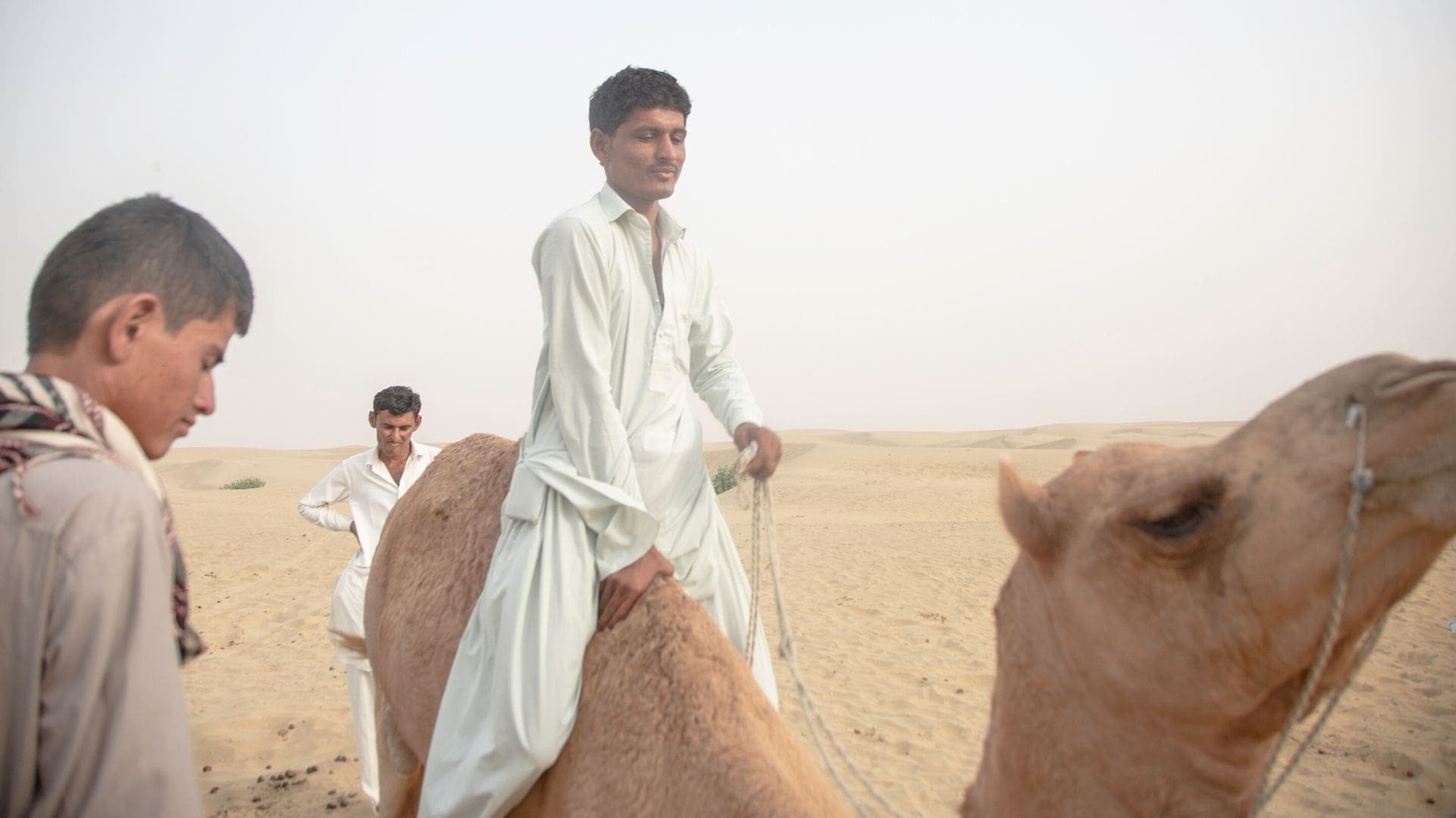 Eighteen-year-old Kadar Baksh recently bought a new camel for Rs 25,000. He will need to pay instalments of Rs 5,000 per month. A group of men observe his the newly bought camel and provide their advice about whether or not the camel is ready for the ride, or how Kadar should train it every day.

Looking at Kadar, it seems as though despite the tough going, the younger generation continues to be hopeful about their future in the profession.

Also read: As Naga Sadhus gather for annual Pushkar Mela, a glimpse into their philosophy of detachment