Even as the return of a tiger to Ajanta after over 50 years shows their resilience, conservation requires trust with local people

On an unusually cold night in October 1964, Jalambaba sat in a cowshed at the edge of Mukpat village, barely two kilometres from the Ajanta caves of yore. Through a hole in the wall, he could just about see the outline of the dead cow, which was less than ten feet away. A single-bore, country-made shotgun in hand, he was waiting for the perpetrator to return.

“When clouds parted, moonlight revealed a tiger feeding on the carcass of the dead cow. Jalambaba, your grandfather, squeezed the trigger and there was a loud bang. The whole village heard it and people started gathering near the Hanuman temple. Everybody wanted to know if the tiger was dead, but nobody had the courage to approach the cowshed where Jalambaba sat all night waiting for the tiger.”

I was eight years old when my grandmother first told me this story. For several years I made her retell this story asking for more details each time.

Nobody ever saw a tiger in the forests of Ajanta after that night. 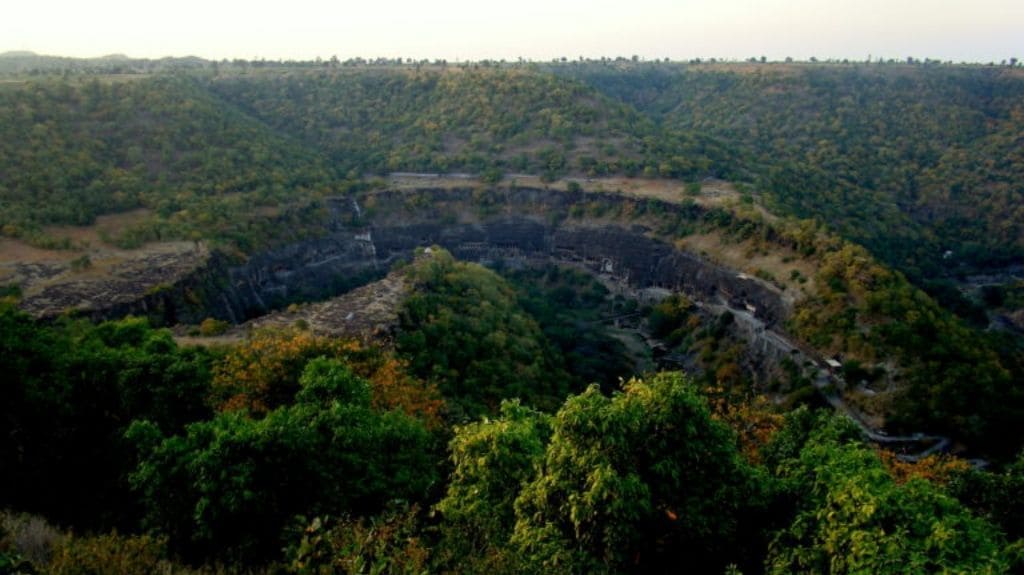 Ajanta caves in the western state of Maharashtra are carved in basalt rock on the banks of the Waghur (Tiger) river. They are surrounded by ravines covered in deciduous forest and dotted with small villages. Photo by Kulbhushansingh Suryawanshi.

Would it be the last tiger of Ajanta?

I never met Jalambaba, my grandfather, for he had passed away long before I was born, but he was my hero. He was the bravest person I knew.

This changed a little when I learned in school that we must protect wildlife for the benefit of future generations. I was told that people who kill tigers were poachers – “bad people”. I wondered if my grandfather was the reason that I will never see a tiger in Ajanta. I knew that Jalambaba had killed two tigers in his lifetime – both of them right at the edge of our village where they had killed cows. But it bothered me that he had probably killed the last tiger of Ajanta. As a kid, I remained proud of my grandfather’s bravery, but I never told the story to my friends. I was ashamed of it.

Jalambaba was a hero not only for me but also for all the older people of my village. To them, the tiger was like the Razakars – the militia of the Nizam State that violently resisted the integration of Hyderabad in the Dominion of India. They said that the tiger would steal cattle, and kill people, just like the Razakar. The people of my village displayed the dead tiger just like the Indian military had done with the local Razakar commander during the Hyderabad Police Action of 1948. My grandmother told me that the only difference between the tiger and the Razakar was that the villagers ran to the hills when the Razakar came and ran to the village when the tiger came.

The tales of tigers and Razakars are fading from the memory of my village. There is now the occasional leopard that prowls the fields at the edges of the village. My father, who still works the same fields as my grandfather, has seen the leopard a few times. My luck has been restricted to seeing the occasional jungle cat. I sometimes wonder if my daughter, who is four years old now, will have the opportunity to see at least a jungle cat, or will they also go the tigers’ way.

Return of the tiger

Unexpectedly, on a cold December morning in 2019, more than 50 years after the death of the ‘last’ tiger of Ajanta, a young tiger walked into Ajanta. The tiger had returned. Newspapers were flooded with reports of a three-year-old tiger that had wandered into the forests of Ajanta and stayed there for eight days. The forest department had kept the news under wraps so that people do not panic and the now-famous UNESCO world heritage site of Ajanta caves does not get bad publicity.

This tiger was a known individual, that had been radio-collared in Tipeshwar Wildlife Sanctuary in Yavatmal district and had been named TPWL-T1C1. Thanks to the radio collar, the forest department could closely monitor the movements of the tiger. A big thanks to the tiger – for it did not go near human habitation and fed entirely on wild animals. After eight days and nights, it moved away toward the Dyanganga Wildlife Sanctuary in Buldhana district and everyone breathed a sigh of relief, especially the forest department.

This eight-day event is significant, for it shows the resilience of the forest and the tiger. 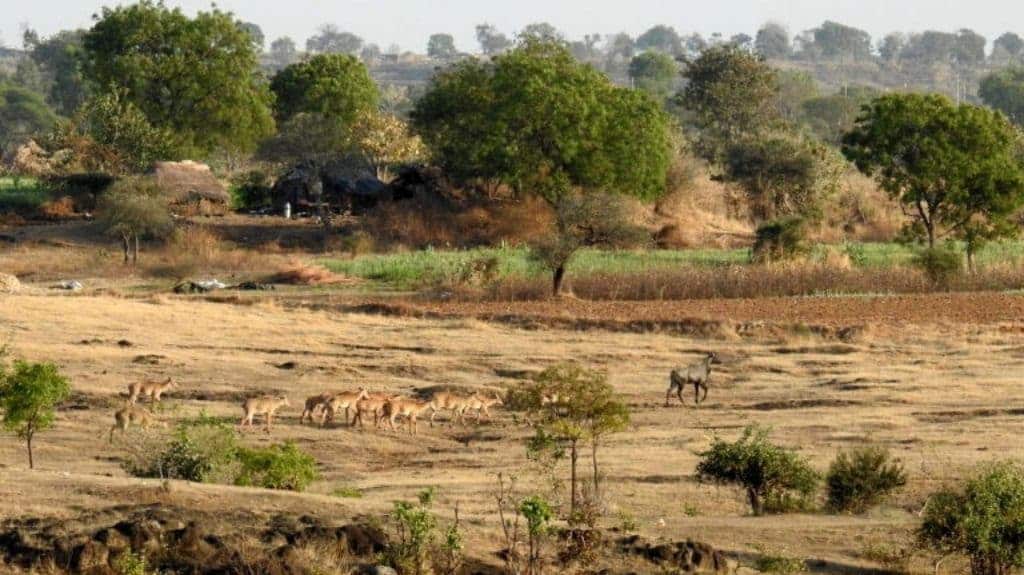 Ajanta caves are surrounded by villages with patches of dry deciduous forests. A herd of Nilgai walks past a few houses next to wheat fields. Photo by Kulbhushansingh Suryawanshi.

Several crores of rupees are needed to conduct reintroduction programs to repopulate the tiger’s former distribution range. Despite spending large amounts of money, success is often elusive. This need to bring back lost megafauna is now becoming a buzzword in conservation – “re-wildling.” The idea here is to restore populations of large charismatic animals like the rhino, elephant, lion and tiger to parts of their former distribution range where they have gone extinct in recent times.

Such efforts are usually expensive and, more importantly, often force the local people to re-adapt to living with animals that have been absent from their memory for at least a few generations. This eight-day event suggests that if the connectivity of forests is maintained, then tigers will reoccupy their former distribution range wherever there is enough prey for them to persist.

This is unlikely to be the last time that a tiger walks to the Waghur river gorge of Ajanta. The forests of Ajanta are contiguous with the Gautala and Autramghat Wildlife Sanctuary. If prey densities remain high and connectivity remains intact, then this region can potentially harbour a few tigers shortly. The real question is – if tigers return to Ajanta after an absence of over 60 years – what will be the relationship of the local people with the tiger and the forest department? How do we ensure that local people do not perceive the return of the tiger as the return of the Razakars?

After Indian independence, people like my grandfather hunted tigers not only because they preyed on the precious livestock of the villagers but also because tigers symbolised oppression – by the British officers and the royals and their courtiers who cared more for their hunting trophies than for the people. The brief period of brutalities by the Razakars was like salt in the wounds of the farmers.

Forcing conservation of large and potentially dangerous species on the marginalised farmer of today is similarly oppressive. Reintroduced or relocated tigers have killed people in this country on multiple occasions. Naturally dispersing individuals like TPWL-T1C1 could also pose a threat to people. Prioritising conservation of potentially dangerous animals over human safety needs a great amount of trust between the people who want to see these animals protected, and the people who will live with the animals that have been protected. In the absence of such trust, the protectors of animals can also be the oppressors of people.

Kulbhushansingh Suryawanshi is a wildlife biologist with the Nature Conservation Foundation.