As Fani-struck Odisha rebuilds itself brick by brick, affected communities in temporary shelters are trying to move on, a month after the extremely severe cyclone hit the state. But for many, it is difficult to even fall asleep at night. The cyclone has dented their mental health, experts have said.

The fear of the raging storm and anxiety for their future is keeping the beleaguered population in affected areas wide awake.

Extremely severe cyclonic storm Fani (Bangla for ‘snake’s hood’) battered the pilgrim district of Puri where it made landfall on 3 May, killing at least 60 people. Thirteen other districts were also shaken up by the cyclone that packed wind speeds of more than 200 kilometres per hour.

Puri district’s Satapada, a town at the mouth of the Chilika lagoon, is in need of immediate mental health intervention, according to a team of mental health experts sent out by the state department of health and family welfare.

“It is becoming very difficult to come to terms with our loss. We have surveyed the damage in our village after the cyclone died down and there is nothing left. I am not sure when we will go back,” said Pooja Naik, a young mother huddled together with her family of nine, in a shelter in Satapada.

Naik, cradling her five-month-old, shuddered at the thought of another cyclone. She vividly recalled the whooshing wind, thrashing waves and swaying trees.

“We were brought here from our village on 2 May and since then we have been here. I have not had such a terrifying experience earlier. I feel like crying every time I think of the cyclone,” Naik told this visiting Mongabay-India correspondent, in a fly and mosquito-infested room, her current home.

In the adjacent room, Moili Naik, a septuagenarian was relatively calm. Displaced three times in recent years, Moili exclaimed she would have been dead if she had not moved out from her mud and thatch house. “This time around, the experience was really scary,” she said.

Director of Cuttack-based Mental Health Institute (MHI) Sarada Prasanna Swain, who mobilised a team to map the mental health conditions observed that people are still on edge and in the absence of timely interventions, mental health issues may follow them long after the disaster.

For example, a year after the 1999 Odisha super cyclone, prevalence of post-traumatic stress disorder (PTSD) was reported to be 26 percent among affected adolescent girls and any morbidity as 37 percent. 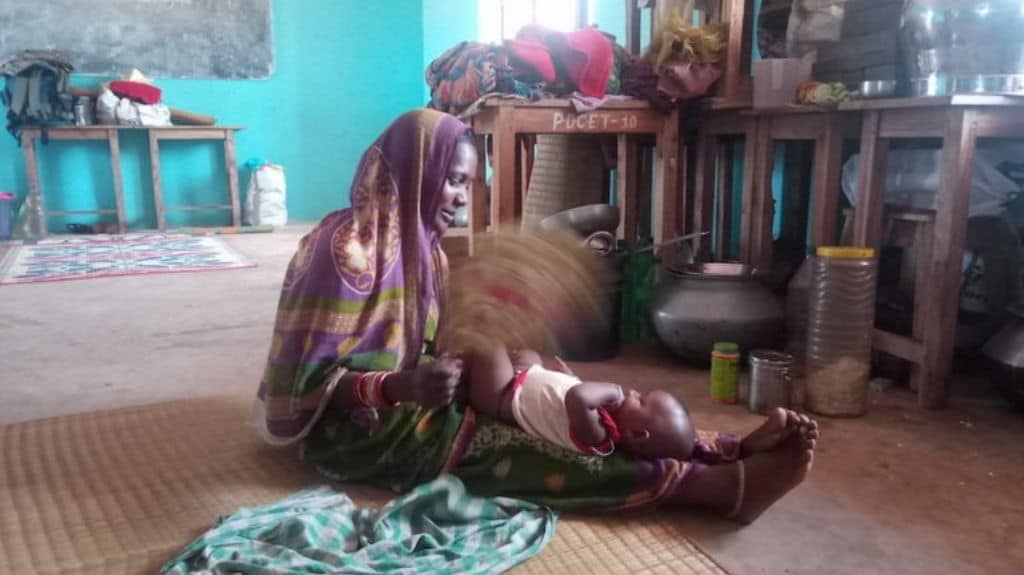 A mother and child inside a relief camp. Photo by Sahana Ghosh/Mongabay.

Persistence of PTSD was attributed to the hopelessness and lack of adequate post-disaster psychological support.

“They are having sleepless nights, difficulty in maintaining a daily routine and social cohesion. They are depressed after observing destruction around them,” Swain said.

“Presence of mosquitoes has further added to their sleep deprivation,” he said.

Swain and colleagues have drawn up intervention plans based on the level of psychological trauma the cyclone has caused to the people, in different pockets of the affected districts.

According to Australia’s Climate Council’s fact sheet, studies have shown that in the aftermath of severe storms, survivors demonstrated a 25 percent increase in the onset of depression.

The fact sheet, which discussed the 2017 cyclone Debbie that caused widespread damage in Queensland, notes that emotional stress can undermine the resilience of individuals and communities, placing further physical, emotional and financial burdens onto recovery efforts.

In Odisha, groups like children, pregnant mothers, the disabled and those with pre-existing mental illness have been severely impacted in terms of mental health, explained Swain, adding that the impacts were more pronounced in areas that witnessed more damage from the cyclone.

And residents of Puri district seem more frightened than counterparts in other affected areas of the state such as Ganjam because, for them, Fani was a unique event, elaborated disaster management expert Jayant Routray.

“Puri residents have not seen such ferocity earlier. They have limited experience in comparison to residents of districts such as Kendrapada who have seen such disasters since 1967,” Routray, emeritus professor, Asian Institute of Technology, Bangkok, told Mongabay-India.

It’s a one-two punch situation for the communities that compound their stress.

On the one hand, displaced communities have to tackle the immediate suite of problems such as access to water and toilets in cyclone shelters and on the other, they have to think of going back, rebuilding and return to the things they were doing, Routray said.

Pooja Naik’s family, for example, has lost all nine of their fishing boats to the cyclone. Initial government estimates peg the number of traditional marine fishing boats lost to the cyclone at 6,389 while three fishing harbours, six fish landing centres and five fish farms have also been pounded in the storm.

Ratnakar Bhoi, a community leader boarding in the Satapada relief camp operating inside a government college, rued that agriculture can no longer be considered a livelihood option.

The soil is salt encrusted now because of the storm surge so at least for five years we can’t bank on full-scale farming, Bhoi told Mongabay-India

Salinity shot up immediately after the cyclone and the saline water ingress has rendered the soil lifeless for now. Photo by Sahana Ghosh/Mongabay.

According to the Intergovernmental Panel on Climate Change (IPCC) while fewer tropical cyclones will form, the global proportion of tropical cyclones that reach very intense (Category 4 and 5) levels will likely increase due to anthropogenic warming over the next century.

“They are self-aware of the situation that will follow post-disaster. People’s indigenous coping strategies have helped them reduce their vulnerability significantly from repeated floods. Even though the early warning system and forecast was robust for Fani, people were not well-prepared to adjust to the reality of the situation,” he said.

Swain contends that a sense of stability can only be met with the restoration of their properties and going back to daily life. “Quality and quantity of health service and relief work will tremendously influence psychosocial well-being in days to come,” Swain said.

Psychosocial support and mental health services are embedded in India’s disaster management framework. The National Guidelines on Psychosocial Support and Mental Health Services (PSSMHS) in disasters were released in December 2009 so as to provide overall guidance for efficient and effective qualitative service provision to the survivors.

This document defined psycho-social support in the context of disasters as comprehensive interventions aimed at addressing a wide range of psychosocial and mental health problems arising in the aftermath of disasters. Fani reduced boats to a pile of wooden planks. Photo by Sahana Ghosh/Mongabay.

Routray batted for capacity development of community workers so that pop-up mental health clinics can be set up to address immediate needs.

“We have the knowledge, the policy instrument but transfer of knowledge and outreach is still weak,” Routray said.

Looking forward, Odisha has started building the capacity of local community workers such as accredited social health activist (ASHA) and other health workers to conduct interventions such as active listening, counselling and identifying symptoms of mental stress in the wake of a disaster.

“These activities will be integrated with relief work and co-ordinated with nearest hospitals for referral,” added Swain.

Banner image: Cyclone Fani blew away the top of a petrol pump. Photo by Manish Kumar.