Even before the sun rises, while birds are still in their nests, a stone spout in southern part of Kathmandu valley in Bhaisepati is providing water to the city’s inhabitants. Of a pair of stone spouts, one is almost dry, though some water leaks through and collects within an area of about one square metre. This is scooped up and ladled into jars. There is always a queue of jars at the stone spouts. Image by: Ramesh Bhushal.

At the other spout that still supplies water, there is a queue from three in the morning till midnight.

Known as dhunge dhara in Nepali or Hiti in the local Newari language, the stone spouts are an ancient system of water distribution. Linking wells, canals, and conduits, the spouts use gravity to channel rainwater to residents all over the Kathmandu valley.

A marvel of engineering, this system was created in approximately 550 CE. In Kathmandu, fetching water tends to be a woman’s responsibility. Image by: Ramesh Bhushal.

Over time the spouts have suffered from neglect, from encroachment in the groundwater catchment areas, and due to haphazard urbanisation which has affected the wells, canals and conduit system. In 2013 the NGO Forum estimated that of the original 389 stone spouts, only 233 are working normally, while “45 no longer exist and 68 have gone dry.” 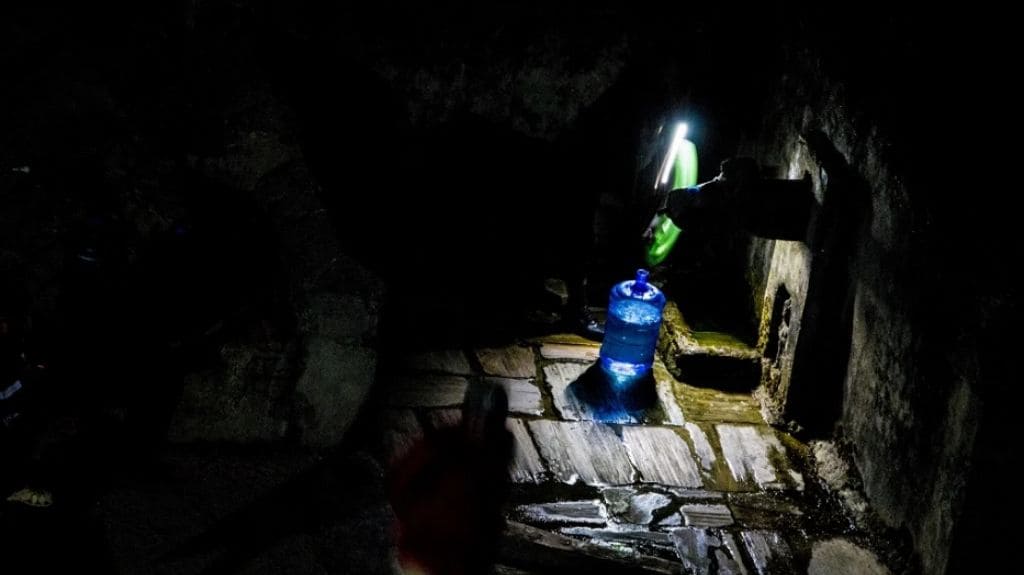 Late at night, or very early in the morning, the stone spouts are always in demand. Image by: Ramesh Bhushal.

43 spouts have been revived by connecting them to city supply lines.

After the introduction of piped water in the 1890s, the stone spouts became the water source of choice for the urban poor. Nevertheless that still means most of the city. According to Kathmandu Upatyeka Khanepani Limited, a public private entity managing Kathmandu’s water supply, water demand reached 377 million litres per day in 2017 while the supply was 120 million litres in the wet season and only 73 million litres per day in the dry season – which is ongoing. That means one in every five people in Kathmandu get water from the official system.

Most people in Kathmandu have to rely on groundwater, private water tankers or the stone spouts. 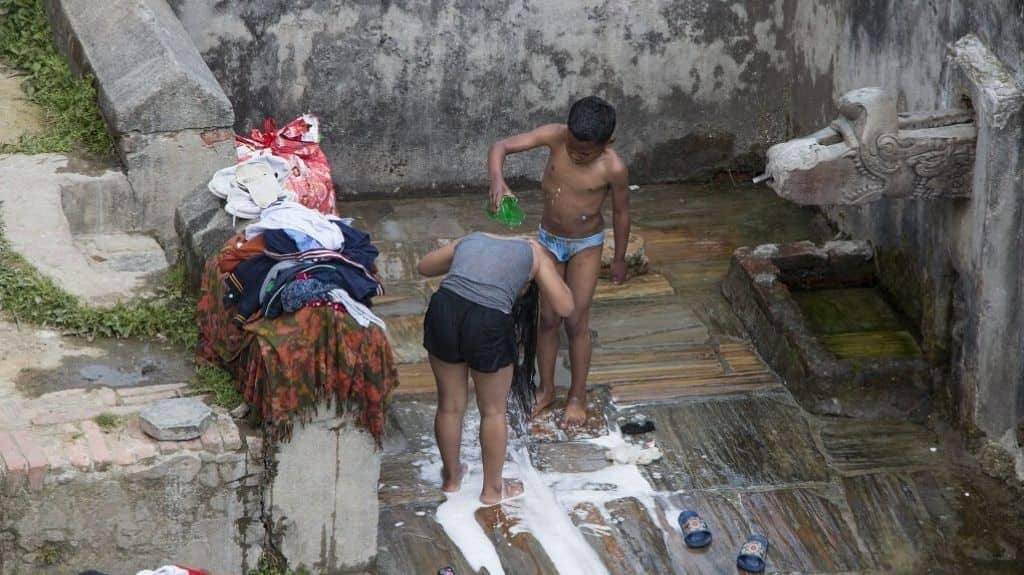 A child pours water over his sister as they bathe by the spout. Image by: Ramesh Bhushal.

Thus there is a huge demand for the stone spouts. The one located 100 metres from my house is always busy. More than 500 jars are filled every day and more than 90 percent of those who come to collect water are women. There are also brawls, political discussions, and socialising, even during the COVID-19 lockdown.

I can hear declarations of how the virus is a form of biological warfare. Others prophesy that the US President, Donald Trump, will lose his bid for re-election because of his handling of the challenge. Then there are suggestions that India may place an embargo on goods coming into Nepal as part of its response as the number of those infected rise in India. Much of the discussion, though, centres around Nepal’s Prime Minister KP Oli. He and his ministers are accused of corruption in buying medical equipment from China, for gross incompetence, and everything else.

The COVID-19 discussions play out like an open-air theatre, full of bombast, declamations and energy. A woman washes clothes as her daughter looks on. Image by: Ramesh Bhushal.

The stone spouts could be almost forgotten, as they have often been, but their value rises in emergencies like the current lockdown. In the aftermath of the devastating 2015 earthquake in Nepal it was the spouts that had provided much needed drinking water. They were one of the very few forms of supply relatively unscathed by the disaster. Now, during the pandemic, they still provide sustenance.

Unfortunately the neglect of the system has made them more and more vulnerable, and who knows whether the people of Kathmandu will have this resource to fall back on when the next emergency comes, and whether the street theatre will continue.