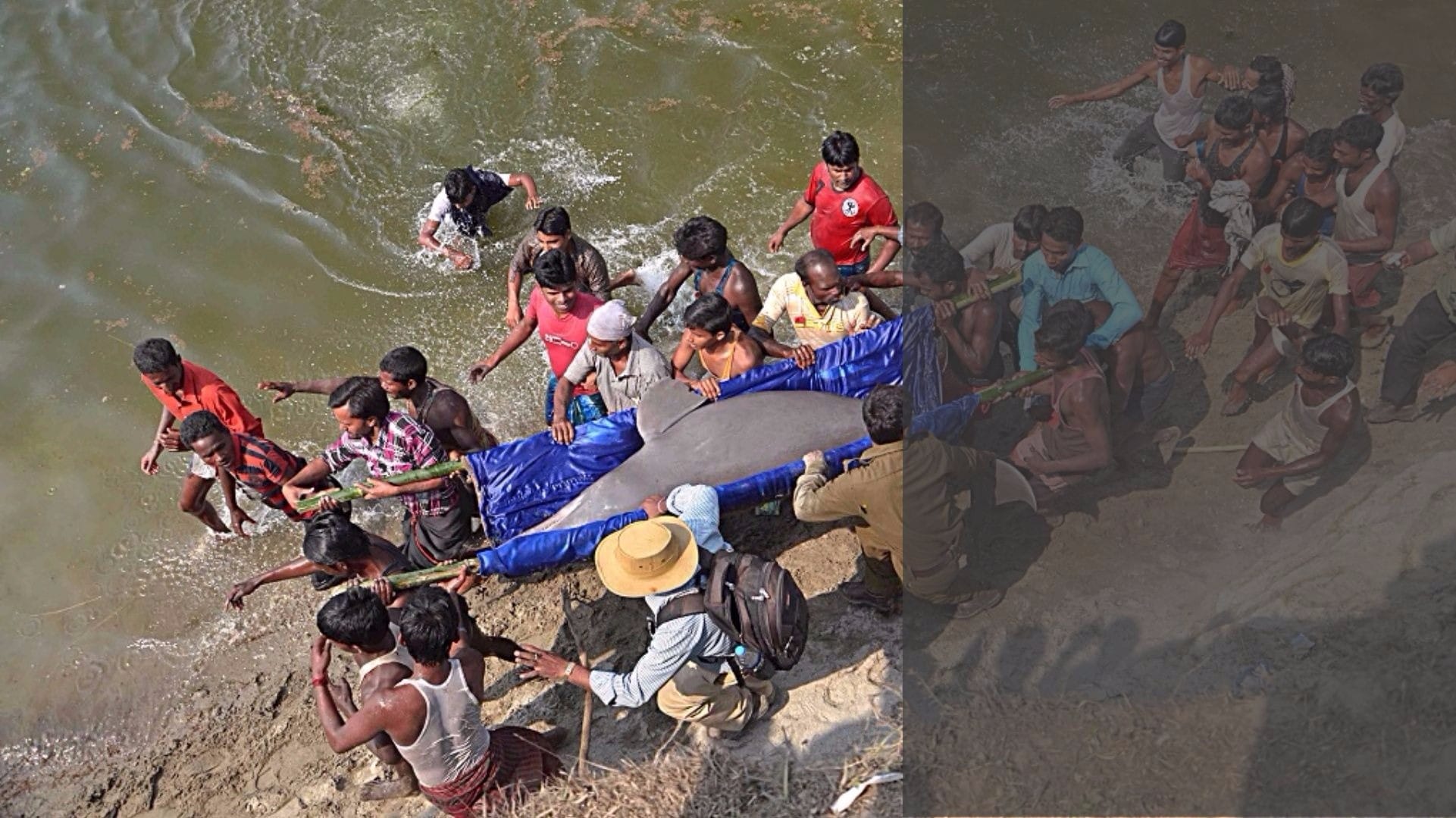 Gangetic river dolphins are being pushed to extinction due to increased pollution, decreased water flow and shrinking fish populations in the Ganga

The already endangered Gangetic river dolphins are facing a clear and present danger from climate change, which has adversely affected their habitat. With their population registering a steady decline, the Gangetic dolphins in different parts of the eastern state of Bihar are now fighting for survival.

Sunil Choudhary, who is associated with the Vikramshila Gangetic Dolphin Sanctuaryin Bhagalpur in Bihar, India’s only dolphin sanctuary spread over 50 km along the river, said the ecology of the river has been changing due to climate change. If the river’s ecology changes, it affects the dolphins’ habitat. In addition, climate change has impacted the population of fish in the river, thus reducing the food supply of the dolphins, he told thethirdpole.net.

Scientists say climate change is a serious threat for much of the world’s running water sources. The Ganga is also at risk. Several studies have indicated the increasing threat to the Ganga from climate change. The river has been ranked as one of the most polluted and dirtiest rivers in the world, with the WWF listing the 2,520 km long river as among the world’s most endangered.

Gangetic river dolphins, primarily found in the Ganga and Brahmaputra rivers and their tributaries in Bangladesh, India and Nepal, are categorised under Schedule I of the Indian Wildlife (Protection) Act and have been placed on the red list of the International Union for Conservation of Nature (IUCN), which signifies that the species is on the verge of extinction. These dolphins are one of the three surviving freshwater dolphin species in the world. The other two are found in the Indus in Pakistan and the Amazon in South America. A fourth species, the Yangtze river dolphin in China, has gone extinct.

The Gangetic river species are blind and find their way and prey in the river waters through sonar echoes. They live by echolocation and sound is everything to them. They navigate, feed, flee from danger, find mates, breed, nurse babies and play by echolocation alone. 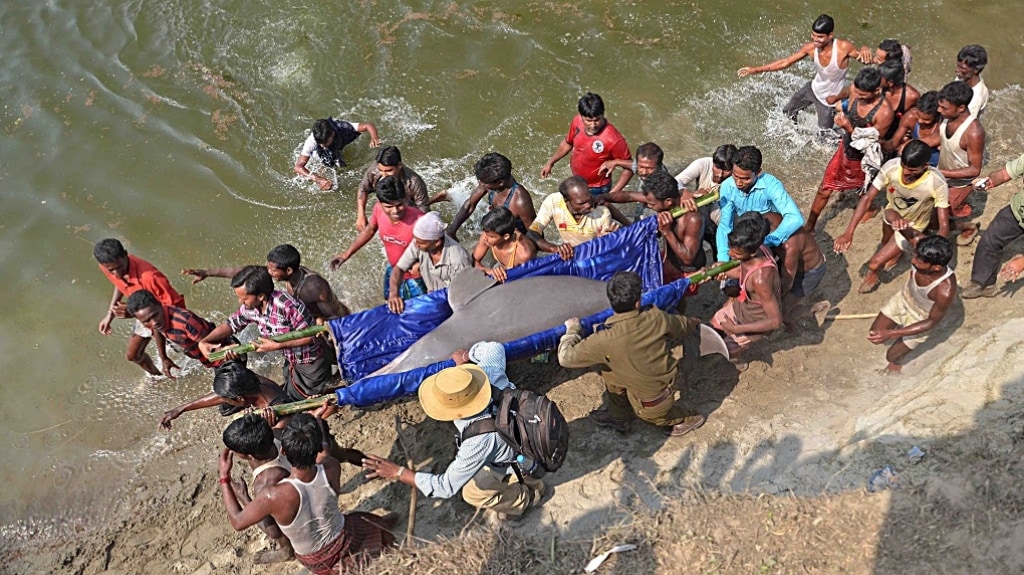 Experts have said that increasing pollution due to large-scale discharge of industrial and municipal waste, siltation, mechanised boats and global warming are some of the biggest threats faced by freshwater dolphins. India’s national aquatic animal also faces threat from poachers. Their carcasses are found regularly on riverbanks. Bihar is home to around half of the estimated 3,000 dolphin population in the country.

Sinha, known as India’s Dolphin Man, said several habitats of the Gangetic river dolphin have shrunk in the last few decades and many more will follow in coming years due to climate change. “Rising temperature and erratic rainfall are leading to fast decline in the river flow and that is bound to hit dolphins hard,” Sinha told thethirdpole.net.

The presence of dolphins is a sign of a healthy river ecosystem, Sinha said. Dolphins prefer water that is at least five to eight feet deep. They are usually to be found in turbulent waters where there are enough fish for them to feed on. “Dolphins prefer deep water with adjoining shallow water. They live in a zone where there is little or no current that helps them save energy. If they sense danger, they can go into the deep waters,” he said. “The dolphins swim from the no-current zone to the edges to hunt for fish and return.”

The increasing demand for river water and the overall rise in temperature are adversely impacting the life cycle of dolphins. The demand for fresh drinking water will only increase as industry grows, thereby attracting more people to settle in these areas, according to the International Water Management Institute (IWMI). The demand for water is expected to rise by roughly one-third by 2050 from the Ganga, which already sustains nearly half a billion people.

New diseases are also surfacing due to global warming, thus throwing up a new challenge to the survival of dolphins. Global warming has caused havoc with the population of small fishes, which are the main food of the dolphins.

“One should not treat Gangetic dolphins as an individual entity as far as climate change is concerned. We should not see them in isolation. They are part of the ecosystem,” Sinha said. “If the Ganga is vulnerable, the dolphins will be more vulnerable.”

Gopal Sharma, a scientist with the Zoological Survey of India in Patna, said that the decreasing water level in the Ganga is a serious matter. “Anthropogenic activities are taking place where there is deep water in the river,” Sharma told thethirdpole.net. “It is a big threat to dolphins because their habitat is the deep water in the river.”

The deep water in the river has become a soft target of fishermen and their motorised boats, Sharma pointed out. Such activities are disturbing the quiet habitats of dolphins. Sand miners active in several riverbanks are posing an imminent threat to the dolphins.

Several recent studies have revealed that loss of water in the Ganga and erratic or less rainfall have added to the problem. What makes the situation worse is that water from the river is pumped for irrigation and industrial purposes in the neighbouring upstream state of Uttar Pradesh. He said that in Bihar, the water flow of the Ganga is primarily maintained by tributaries such as Ghaghra, Gandak and Koshi. The combination of shrinking habitats and poaching may push the unique Gangetic river dolphins to extinction unless immediate remedial measures are undertaken. Representational image

Sharma recalled that nearly two decades ago, the water level in the Ganga used to be much deeper. Dolphins used to be sighted everywhere in deep water since they need to come to the surface to breathe. While calves hit the surface every 10 seconds to one minute, adult dolphins surface every three minutes.

Gangetic dolphins shift their habitat during the rainy season every year, when the water level in the river rises. They move to small tributaries and floodplains to avoid strong currents and also in search of food. Though officials of different government agencies are reluctant to share information on the flow of rivers, they admitted that the Ganga has been recording a low inflow in its lower reaches in recent years.

The Bihar government is scheduled to conduct a survey of the Gangetic dolphins in 2018 along the 525-kilometre stretch of the Ganga between Chausa in Buxar district in the west and Manihari in Katihar district in the east. The Wildlife Institute of India will help in the study. The last survey was conducted in 2012 and nearly 1,500 dolphins were counted.

The outcome of the study will help in making a comprehensive plan to take necessary steps to protect the animals, including protecting and preserving their habitat, DK Shukla, the state’s Principal Chief Conservator of Forests, told thethirdpole.net.

A team of experts conducted a survey from 29 October to 2 November, 2017, from Munger in Bihar to Farrakka in the neighbouring downstream state of West Bengal, covering about 250 kilometres of the river. It found a nearly 25 percent decline in the population of dolphins compared to their population of about 200 in that stretch in 2014-15.

The mammals are being killed at an alarming rate for their flesh, fat and oil, which is used as bait to catch fish, and to make ointments and aphrodisiacs. The combination of shrinking habitats and poaching may push the unique Gangetic river dolphins to extinction unless immediate remedial measures are undertaken.